The Low Point of My Binge Eating Disorder

When I hit my binge eating disorder low point, it involved a pizza. I had just gotten off 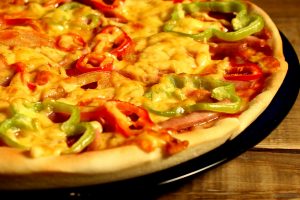 from work at my job as a nail technician and had purchased a large pizza for dinner that night. I went home to the house I shared with my fiance. Our relationship had always been rocky and around this time I was feeling particularly lonely and ignored.

He told me to start eating and he would join me in a few minutes. I took the first slice of pizza and waited for him. He never came down. I took a second slice of pizza. He still didn't show up. As the night wore on, I methodically ate the entire pizza, by myself, in one sitting. It started out as normal hunger, but soon I started eating my feelings of loneliness, neglect, and worthlessness.

Why Was This My Binge Eating Disorder Low Point?

When asked why this incident sticks out in my mind as my rock bottom low point in binge eating disorder, the answer is really simple. I realized at that moment I was out of control. Something clicked in my brain that wasn't me simply lacking willpower or self-control. My behavior was compulsive. Compulsive behavior was something I had experienced with my bipolar disorder and I realized this compulsive hunger and eating was in the same vein.

How Did This Low Point Lead to a Binge Eating Disorder Diagnosis?

As I've mentioned before, I was surprised to find out that I had an actual problem and that this wasn't a personality flaw or a personal failing. But in other ways, I knew there had to be something wrong with what I was doing. The compulsiveness of my behavior was not healthy or average. The positive thing to come from this experience was that I finally got the help I needed. But it definitely took me reaching the bottom of a pizza box to realize it.

Fight For Your Body: Binge Eating Disorder and Negative Comments
A Binge Eating Recovery Victory
Amy
September, 7 2015 at 12:17 am

Mioche - check out the Renfrew Center in Dallas. It has been life changing for me in regards to my BED.

I desperately want help. My current therapist doesn't think it's that serious... It's only food, not alcohol or drugs. I was seriously looking for an inpatient program or something, anything, to interrupt this very slow destruction of body and soul. I live in the DFW area, and I can find 12-step meetings, but I can't get "abstinent" from overeating for more than a day or two. I need help, I want to be free.

hi! my name is yolanda and i'm a binge eater. i've been seriously considering the gastric sleeve fofr some time. i know it's a major challenge to eat tiny amounts after years of eating as we desire to. i have diabetes and my kidney function is compromised. i need good advice and support to go ahead. please write me. thank you

Hi there! The decision to get gastric surgery is really big. Be sure to talk to your doctor and really think hard about the pros and cons. It's a big step, but it could be one big step to bigger and better things for you. Best of luck with your decision. Be sure to check out some of my other blogs on gastric surgery. Thanks for writing to me!