How Caffeine Affected My Anxiety 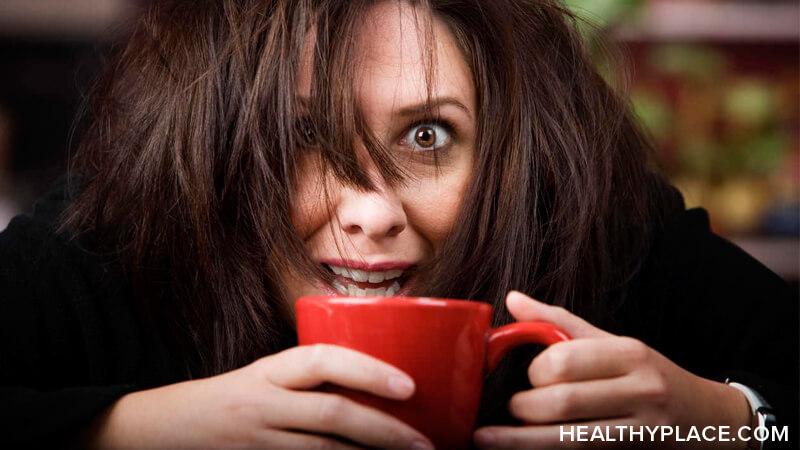 I've been drinking an average of two cups of caffeinated coffee a day for decades. This is not a lot by some standards. I relished my first "cup of Joe" in the morning, appreciating the way it got me going. That second cup in the afternoon was the delicious pick-me-up I needed. I always knew that caffeine was a stimulant, but I never quite understood how caffeine affected my anxiety, if at all.

Caffeine gets me going. It gets a lot of people going. I assume that's why people start their day with a cup of coffee the world over.

According to Healthline, caffeine is present in coffee, black tea, green tea, chocolate, energy-boosting drinks, carbonated beverages, and more.1 The levels of caffeine in each of these differ significantly.

The Alcohol and Drug Foundation states that how someone reacts to the stimulus depends on the person: their size, health, medications, if they're used to consuming caffeine, how much they've consumed, etc. They also state that caffeine, like other stimulants, can cause many short- and long-term side effects, like:2

My brother gets the shakes after just half a cup of regular coffee. My husband is up for hours if he has coffee late in the day. On the other hand, I have no trouble sleeping when I drink coffee and typically feel no side effects.

Why I Quit Caffeine

Several months ago, I suffered weeks of sudden, prolonged panic. It seemed like my sympathetic nervous system (SNS) completely misfired over and over again. This was followed by months of heightened anxiety. Along with the many terrifying symptoms of panic disorder, I completely lost my appetite. Instead of coffee, I drank herbal teas.

When I tried to stop drinking caffeinated coffee, I experienced headaches, fatigue, and irritability. Given I was already experiencing these symptoms from my ordeal, I didn't even notice. I had inadvertently weaned myself off of caffeine.

My panic attacks subsided after six weeks or so. As my recovery slowly progressed and my appetite and cravings returned, the anticipation of again enjoying a hot cup of coffee was top-of-mind. Even though I never experienced any discernible side effects from the caffeine in coffee, I didn't want or need any stimulants that might trigger my anxiety.

The obvious option for me was to drink decaffeinated coffee. I knew that even though many coffee brands offer a decaffeinated variety, not all decaf is alike. Before I could think about enjoying a cup of decaf coffee, it was time to do some homework.

I turned to the internet to learn about coffee and read a great article on Coffee Confidential. They confirmed for me that there's no such thing as a naturally decaffeinated coffee bean. Also, regardless of which process is used to decaffeinate, caffeine is still present in trace amounts.3

Coffee Confidential lists these four decaffeination processes as the most common:

Given my state of mind and body at the time, this was important. I had determined that no one decaffeination process seems to work better than the other. Next, I needed to determine just how much caffeine there was in decaffeinated coffee.

My daughter, an ex-barista, told me that the amount of caffeine present in a cup of coffee depends on several factors:

She also told me that one common misconception about caffeine in coffee is that the darker the roast, the stronger the kick. This isn't so. The roasting process removes some of the caffeine from the beans. A light roast has more caffeine than a dark roast, while a dark roast has a richer flavor.

I turned to my three favorite brands and did the math. Once I understood how much caffeine I would still be ingesting, it was time to weigh my options. Would the trace amounts of caffeine in decaffeinated coffee cause any side effects? If so, would the side effects trigger my fragile sympathetic nervous system into thinking it was in danger again? Would the panic attacks return?

Was drinking decaffeinated coffee worth the risk?

It was still early in my recovery, and I was nervous that the next panic attack was right around the corner. I didn't want to do or consume anything that would trigger panic. On the other hand, I was slowly getting my life back and was ready to venture out of my safe space. I was ready to give decaf coffee a try.

It seems almost silly that, at the time, I considered drinking a simple cup of coffee as getting out of my safe space. That's how disturbing and disruptive this prolonged episode of panic and anxiety was.

I'm happy to report that while I drank that first cup with trepidation, I suffered no side effects whatsoever to the trace amounts of caffeine in my decaffeinated coffee. This may not be the case for everyone, so it is essential to personally assess the benefits and risks.

As for me, instead of drinking and appreciating coffee for the boost it gave me, I now enjoy my "cup of Joe" purely for the flavor, the warmth, and the comfort it brings.

Is Getting Lost in a Hobby Good for Your Mental Health?
How I Coped with an Unexpected Anxiety Trigger
Heide
February, 9 2022 at 8:37 am