Anxiety awareness is important all the time, but during Mental Illness Awareness Week, a special spotlight shines on mental illness, including anxiety disorders. Such a spotlight brings light and warmth to anxiety, which is so often swept away into dark corners. Read on for information that can help increase awareness of anxiety and anxiety disorders and lessen some of the frustrations that come with a lack of understanding.

Why Do We Need Increased Anxiety Awareness? 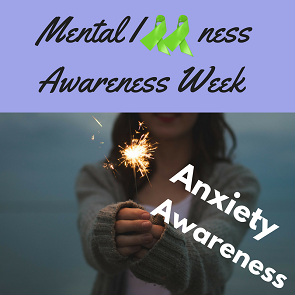 There's a need for increased anxiety awareness. Uttered frequently and in frustration, this lament is common among people living with anxiety: "How can I get others to understand?" Often, well-meaning friends and family attempt to curb someone's anxiety with such grand proclamations as

Facing naïve statements can make anxiety worse. Comments like these are unhelpful in many ways: they minimize someone's very real experience with anxiety; they can make someone feel guilty, incompetent, and increasingly isolated; and they keep someone stuck rather than moving forward. Increasing anxiety awareness will help change well-meaning but unhelpful comments (Stop Minimizing Mental Illness: Worst Things to Say).

Anxiety Awareness: Why is Anxiety a Mental Illness?

The term mental illness can be an intimidating one. (A a major reason we have Mental Illness Awareness Week is to remove the stigma surrounding the word, concept, and people, and to allow for conversation and understanding.) Mental illness often conjures horribly stereotypical and incorrect images. Certainly anxiety isn't a mental illness, right?

Anxiety can absolutely be classified as a mental illness. Anxiety, with it's accompanying fear and worry, is a normal part of the human experience, and everybody experiences anxiety from time to time. Anxiety itself is not a mental illness.

So when someone asks if you're making too big a deal out of something, you can calmly respond that yes, you are, because that's what anxiety disorders do and that because you're working on reducing anxiety, it won't always control your reactions.

Anxiety Awareness Reminds You That You're Not Alone

When you live with anxiety, it can feel like there's something wrong with you, that you're the only one who struggles with anxiety. One of the goals of increasing anxiety awareness during Mental Illness Awareness Week is to let everyone see that no one is alone.

Together, anxiety disorders are the most common of all mental illnesses; 18 percent of adults in the US, approximately 20 million people, live with at least one anxiety disorder at some point during their lifetime. 2

Anxiety Awareness: What IS Anxiety, Really?

The DSM-5 defines anxiety disorders as "...disorders that share features of excessive fear and anxiety and related behavioral disturbances" (p. 189).1 While of course accurate, it falls a bit short in its ability to increase awareness of anxiety. The more people are aware of what it’s like to live with anxiety, the more they’ll be able to truly empathize and support.

Mental Illness Awareness Week exists to enlighten us all and create deeper understanding and empathy. When anxiety awareness increases, so does the type of support that leads to healing.

What to Do When Anxiety Says You're a Failure
Ten-Day Challenge to Reduce Anxiety
Becky Winks
October, 10 2016 at 8:27 pm

I agree that an awareness week allows those of us with anxiety to realize just how not alone we truly are. Removing the social stigma of anxiety and mental illness can only happen one person at a time. Thanks for doing your amazing part!

Hi Becky,
Thank you so much for your comment. I think that when so many individuals work toward removing stigma (and there are a lot of us -- no one is alone!), powerful change can happen. I'm happy we're in this together!

People who are suffering from anxiety disorder often finds relief in drug addiction or alcohol, when they are not supported by their loved ones. That is why people should not underestimate the anxiety issues of their loved ones.

Hi Rose,
Substance use is not uncommon among people with any mental illness, including anxiety disorders. Often, it's used as a coping mechanism. Having help replacing this with something more effective and safer is important. Thank you for the resource and link to No More 12 Step. org. HealthyPlace doesn't recommend one type of program over another because what is effective for some may not be for others. I've included this link to information about 12-Step programs so people are free to check out both and see what suits them: http://www.nomore12step.org/