Taken from a Criteria compiled by ADHD Library

I have included this explanation for ADD/ADHD because I personally love things to do with Winnie the Pooh and Friends, also over the years since our son has been diagnosed we have often commented on the similarities of some of the characters from these stories and some of the people we know who have been diagnosed with ADD/ADHD.

Over the years Simon has made various screen savers and games based on all of these characters - for no reason other than we kept finding the similarities and therefore these were quite often topics of conversation when he was working on these games and screensavers. Coincidence - or What??

Then while browsing the Internet I came across a website, ADHD Information Library, that appeared to have similar views as we did on this subject. However they had taken it a bit further than we ever had and written a type of diagnostic criteria based on the characters with one added bonus character of Taz the Tasmanian Devil which again is another comparison we have often used. Please check out their site by clicking on the link below to see more of their explanations.

Research literature, recent books, and common sense, all point to the fact that there are different types, or styles, of ADHD. In the past people would have referred to Attention Deficit Disorder: Inattentive Type, or Impulsive/Hyperactive Type, or a Combined Type. Today the diagnostic differences are a bit less clear, but the reality doesn't change.

Dr. Daniel Amen, from the Amen Clinic has written a great book on the subject, titled "Healing ADHD:The Breakthrough Program That Allows You to See and Heal the 6 Types of ADD" where he uses his SPECT scans of patient's brain activity to help in making his six classifications. His classifications include these "Types" ...

The Different Types of ADHD: in Detail...

Classifications from the ADHD Information Library whose Clinical Director is Dr. Doug Cowan, are a bit different, and are based more on their clinical observation and experiences. They are based on the classic children's stories of Winnie the Pooh and his friends in the Hundred Acre Wood.

Different Types, or Styles, of ADHD

Tiggers Like to Bounce... Bouncin' is What Tiggers Do Best!

They call this type of ADHD "Tigger Type." Classic ADHD is characterized by Inattention, Impulsivity, Hyperactivity, Restlessness, and Disorganization. This type of ADHD reminds us of Tigger from the Winnie the Pooh stories.

Dr. Daniel Amen refers to this type of ADHD as "Classic ADHD" for good reasons. When you think about someone who has Attention Deficit Hyperactivity Disorder, this is the classic picture that you think of.

Those with this type of ADHD are often seen as:

Being easily distracted
Has a LOT of energy, and is perhaps Hyperactive
Can't sit still very long
Is fidgety
Talks a LOT, and can be LOUD
Is very impulsive, does not think before he acts
Has trouble waiting his turn in line, or in games
and more...

Tigger Type ADHD results from UNDERACTIVITY in the Prefrontal Cortex, both when at rest, and when performing concentration tasks.

This type of ADHD is most often seen in males.

Winnie the Pooh is the classic picture of Inattentive ADHD.

In other works people would have called this "Space Cadet" style ADHD.

Dr. Daniel Amen refers to this as "Inattentive ADD". These are people that suffer from "brain fog" as they go through their day.

Although Pooh is very lovable and kind, he is also inattentive, sluggish, slow-moving, unmotivated. He is a classic daydreamer.

People with this type of ADHD are often seen as being:

Easily distracted
Having short attention spans to a task that is not interesting, or is hard
Daydreams when others are talking to him/her
A person who cannot find anything that they have just put down somewhere...
A person who is always late
Is easily bored

This type of ADHD is caused by the prefrontal cortex of the brain actually slowing down (instead of speeding up activity) when placed under a work load, like reading or doing homework. This part of the brain looks normal when "at rest" but actually looks like it is starting to fall asleep when asked to "go to work." This makes it very hard to pay attention to school work, get homework done, listen to the teacher, clean your room, and so on.

Winnie the Pooh style inattention is seen mostly in girls. It responds well to stimulants, such as Ritalin and Adderall, but other interventions work well also.

Over-Focused ADHD: Rabbit Tends to His Garden... and don't bother him.

The least flexible character in all of the stories of Winnie the Pooh and Christopher Robin has got to be Rabbit. Oh, he can get a lot of things done, and he's the one character who will be prepared when winter comes, but he has a very hard time shifting from one activity to another. He is absolutely "task oriented" and is focused to whatever that task might be.

The person with "Over-Focused ADHD" is much the same. He has trouble shifting attention from one activity to another, and he frequently "gets stuck" in loops of negative thoughts. He can be obsessive, and very inflexible. He can also be oppositional and argumentative to parents.

He may be like a "bull dog" and not give up until he gets his way, or until his worn-out parents finally say, "yes," to his 100th request for something. His parents are often worn-out, worn-down, fed-up, and ready to break. Parenting a child like this is hard.

Someone with "Over-Focused ADHD" is like Rabbit, in that he:

May worry a LOT, even over things that don't really matter much
Can be very oppositional to parents
May like to argue
May be somewhat compulsive about the way things ought to be done
Will have a very hard time shifting from one activity to another
Always wants to have his way

The cause of this type of ADHD is an over-active Anterior Cingulate Gyrus. This part of the brain is over-active all of the time.

And, to make things worse, when a "work load" is put on the brain, such as school work or a chore to be completed, there is the common ADHD symptom of decreased activity level in the Pre-Frontal Cortex.

In this type of ADHD some stimulants, and too much use of L-Tyrosine to increase dopamine production can actually make the problem of over-focus worse. So be careful.

Piglet is a great friend, but sure scares easily...

Piglet is that small, almost frail character from the Hundred Acre Wood. He is a great friend, and very loyal. But he is always worried, nervous, and easily startles. Sometimes he is so nervous that he stutters. So it is with some kids with ADHD.

This style of ADHD is very similar to the Rabbit style, except that with "Piglet style" the child's mid-brain is so over-aroused that the child is hypervigilant and very easily startled. He may be talking all of the time, and is probably touching everything in the room. And, this child is nervous or worried, or anxious. He has trouble shifting attention from one activity to another, and he frequently "gets stuck" in loops of negative thoughts. He can be obsessive, and very inflexible.

In this type of ADHD some stimulants, and too much use of L-Tyrosine to increase dopamine production can actually make the problem of over-focus worse. So be careful.

"Thanks for Noticin' Me" says Eeyore...

He walks slowly. He looks sad. He doesn't accomplish much. He's just glad to be noticed. This is Eeyore, the stuffed donkey who is so often in need of his tail being pinned back on.

Those with this type, or style of ADHD are often:

Inattentive;
Have a chronic sadness or low-grade depression;
The seem to be negative, or apathetic;
They have low energy levels;
They just do not seem to care. They often feel worthless, or helpless, or hopeless.

This type of ADHD is called "Limbic System ADHD" by Daniel Amen. And for good reason. SPECT scans show that when the brain is at rest, there is increased activity deep in the limbic system, in parts of the brain called the thalamus and hypothalamus. There is also a decreased level of activity in the underside of the pre-frontal cortex.

When the brain is placed under a work load, as during a homework assignment, nothing changes. The over-active limbic system remains over-active, and the under-active pre-frontal cortex remains under-active.

This type of ADHD looks very much like a combination of ADHD and Depression. Some have suggested that up to 25% of children with ADHD are also depressed or suffer from a mild depression called Dysthymic disorder.

Other, More Difficult Kinds of ADHD

There are two other kinds, or types, of ADHD that you should be aware of. There are no Winne the Pooh characters for these two types, as the creator of these children's stories would never have created a character with these challenging, difficult traits.

These two distinct types of ADHD can be very severe. They require significant treatment, and great patience on the part of the parents.

The Temporal Lobes and ADHD

Some people with ADHD can be very hard to live with. They can have gigantic mood swings, get very angry for almost no reason, and be nearly impossible to live with on a daily basis. The key to look for with this type of ADHD is anger outbursts for little or no reason...

People with decreased activity in the left temporal lobes can especially have problems with temper outbursts, aggressive behaviours, and even violence toward animals or other people.

Temporal Lobe ADHD is characterized by:

Inattention, just like in other kinds of ADHD because during concentration there is a decrease in activity in the pre-frontal cortex;
Being easily irritated or frustrated;
Aggressive behaviours;
Dark moods, big mood swings;
Impulsivity;
Breaking rules, in trouble a lot, in fights a lot;
Defiant toward authority, disobedient toward parents and others;
Can't get along with others, can be anti-social or just in trouble a lot;
Often has terrible handwriting and problems learning;
You expect him to be arrested at any time...

next: Tyrosine for Treatment of ADHD
~ back to adders.org homepage
~ adhd library articles
~ all add/adhd articles

APA Reference
Staff, H. (2008, December 30). Types of ADD/ADHD in the form of the characters from Winnie the Pooh!, HealthyPlace. Retrieved on 2022, November 25 from https://www.healthyplace.com/adhd/articles/types-of-addadhd-in-the-form-of-the-characters-from-winnie-the-pooh

Where Do I Start?
Disclosing ADHD Disability to Employer 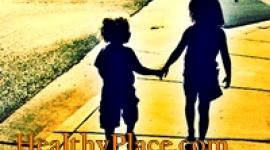 What is ADHD Coaching?

A look at the psychology behind why married men visit prostitutes and seemingly risk everything in the process.

There are few things more devastating to a spouse than the betrayal of infidelity, and…

Symptoms of psychotic mania and full-blown mania are similar, but there's one important distinction between the two. Find out what it is.

Psychotic mania and full-blown mania can look so…

Rape Prevention: How to Prevent Rape

Learning about rape prevention represents something women can do to proactively protect themselves against a potential assault. Keep in mind that even when you take all the precautions necessary to…

Information on the safety of antidepressants and mood stablizers during breastfeeding.