A look at a child's behavioral changes as a result of being a victim of sexual abuse.

Behavioral changes as a result of your child's sexual abuse experience are to be expected. These changes are normal responses to a highly stressful experience, even though that experience has stopped because of disclosure. Children have limited verbal skills in expressing their stress; therefore most children will express their distress through their behavior.

How Seriously Will the Sexually Abused Child be Affected?

Children are affected by their sexual abuse experience in different ways and at differing degrees of severity. The following are some of the factors that will influence the degree of severity of the sexual abuse on your child:

2) A child's own internal coping resources will impact the effects of sexual abuse. For example, if a child is stress-resilient and has not had any other serious life stressors there could be a reduced negative impact. When children have already experienced life stressors, such as physical abuse and domestic violence, their self-esteem and resiliency is already lowered and they face even greater difficulties from the additional stress of sexual victimization.

3) The child's age and developmental level influence the impact of sexual abuse. Generally, professionals believe that the younger the child's chronological age or the younger the developmental stage of the child the more serious the negative effects. Also, girl victims appear to process the effects of their sexual abuse differently from boy victims. For example, boys are more apt to act out their anger about the abuse, where girls are prone to hold their anger inside and direct it at themselves. 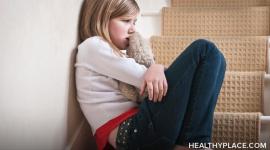 How to Discipline Your Child for Hitting Others

Taking A Break From Caregiving