My Bipolar Breakdown: Could I Have Prevented It? 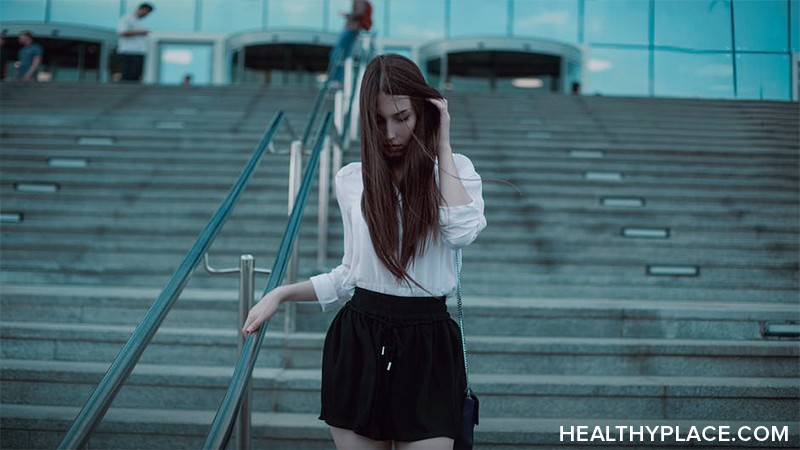 When I look back on my bipolar breakdown in college, I always ask myself: "Could I have prevented it?"

It is not often that I reflect on my past and those particular years where my mental health rapidly began to decline. The friends, the freedom, the city and fun moments are the memories I took with me from that time in my life. The internal struggle and mental conflict were the memories I left behind.

One month before my bipolar breakdown, I started therapy sessions at the health and wellness counseling center on campus, but it was short lived. Although the clinic lacked adequate mental health resources, the condition I was in at the time called for more than what they were prepared to handle. If I went for regular visits soon after the symptoms of bipolar 2 disorder surfaced, it might have prevented me from dropping as hard as I did.

One primary resource I did not utilize was my friends and family. My friends had never done anything that would prove them to be disloyal or untrustworthy friends; in fact, it was the complete opposite. They were authentic, loyal and many of them had faced depression. I had a very open relationship with my parents and siblings, but I still did not make an effort to reach out. I was determined to keep smiling, and my refusal to appear weak to those around me only increased the symptoms of bipolar 2 disorder.

The Reasons My Bipolar Breakdown Was Unpreventable

My bipolar breakdown was unpreventable. Trust me, I have examined the missed opportunities to reach out for help, but overall my mental decline was inevitable based on who I am by nature. For me to have received the proper treatment, I had to hit rock bottom. Even if I went to regular therapy sessions and experimented with medications, the wall built up inside me would have never come down.

The common phrase, "You won't believe until you see it," is so simple and so right. It was not until I was involuntarily placed in a psychiatric hospital shortly after my breakdown that I finally believed it. When I walked through the doors of the hospital, it was almost as if my internal pain jumped out of my body and I could see it physically standing in front of me.

These are the reasons my bipolar breakdown was unpreventable. It is the part of my past that I hesitate to reflect on often, but I am aware that it was meant to be. The breakdown shaped my journey and led me to where I am today. I am forever grateful for it in many ways.

What advice would you give to someone showing signs of bipolar disorder? What would have helped you when your mental health started to decline? Please share your experience below in the comment section or do a response video and send it into info@ healthyplace.com. Thanks!

APA Reference
Blum, H. (2017, August 2). My Bipolar Breakdown: Could I Have Prevented It?, HealthyPlace. Retrieved on 2020, February 20 from https://www.healthyplace.com/living-with-bipolar-blog/looking-back-on-my-bipolar-breakdown

Bipolar and Relationships: When I Experienced Gaslighting
Bipolar Disorder and Perfectionism: Am I a Perfectionist?
Jonathan Henderson
January, 8 2019 at 6:42 pm

When one realizes that the qualities of the individual outweigh the quantity of the diagnosis, understanding mental illness as a holistic phenomena (mind, body, and spirit) will become so much more concrete and frankly, simplified. It should never take 33 degrees of 'process' in order to learn what is 'truth', but rather understanding that individual is quite different from the legalism in play. or the subliminal messages that earn millions for some by regulating stream of consciousness.
In assessing our flaws (and I too, am diagnosed with Bipolar II as well as OCD), we are as quick to 'box ourselves in' under artificial criteria that is as cliche as, say, Carl Jung system for personality typology. As curiosity killed the cat, so too will my personality: I took the Myers-Briggs exam and lo-and-behold, I was an 'INTJ'; and yes, ever since my childhood, all my peers approached me with a degree of fear and trepidation even though I did them harm except for viewing the world through my own eyes. But in time, even after being diagnosed at 20 years old (and long before I'd ever heard of MB testing), doctors then suggested I might rate 'high' on the autism spectrum scale, even perhaps in others that would suggest schizotypal behaviors. It was here that I realized that ever strata of the human condition had been diagnosed' as defective and beyond recognition. We can change the world, and we can 'change' the person, but with every action, cited Isaac Newton, there is still that stubborn matter of 'equal and opposite reactions' in proportion to the level of force exerted by the catalyst.
In embracing secular humanism in the agenda to manufacture those settled 'pseudo- sciences' ranging from medicine to physics and everywhere between, acting in the name of unconditional 'Love' for mankind did in fact achieve one reality most will never accept as true: it dehumanized the individual who exists only as 'a patient' in possession of a name, Social Security number, but no face in the eyes of most people. We created this beautiful colossus of red tape and inefficiency to care for the patient, but alas! in the process of scientific inquiry becoming 'a settled bunch of nothing', what plagues 'the patient' has nothing to do symptoms now. It's what will treat them, born of scholarly papers submitted for peer reviews and grants for researching more things to write about, but rarely serve the needs of individual people based on cultural biases at the highest levels of academe.
Worse than losing sight of the truth in the name of prestige, or outright running from the truth in the name of vanity, is how entire nations and societies forget about the truth in the wake of rejecting the first and being blind to the second pathway to arriving there. The reasons we have rejected the truth (and forgotten about the truth) is because 'happiness' to us means simply to 'feel good', to 'do what thou wilt' as 'the whole of the law'. And if we don't know where we're going, doesn't postmodern thought suggest that any road will take us there?
In the end, no one can help everyone. But, and this is important, every one can help someone. Just ask Jerry Maguire, who taught me everything I didn't learn in Kindergarten. At some point, we will acknowledge that in understanding and treating bipolar disorder, or anything else ailing us, we can become wise to the ways of the world and its seemingly endless abundances of wisdom and knowledge, but in the end it still boils down to all being vanity and vexation of the spirit. Is the person specifically 'Bipolar II'? Are there legal guidelines for regulating my treatment and right to exist based on a label?
How about we treat the person as a whole, and stop questioning the jungle surrounding it? In the end, we cannot find the truth to this; the truth will instead find us, and usually leave a bitter taste in our mouths for living the lie that we accepted any denying what didn't appeal to us. There's a reason that, in seeking 33 steps to enlightenment, 33 times 3 only leaves us with 99%, and that the truth is the additional 1% that we simply can't reach because the secret is right in front of us.

Ashley
I have been seeing my boyfriend since July of 2019 so for about 7 to 8 months now and he informed me he has bipolar on our second date. I accepted him anyway because I didnt care (I have a friend who is bipolar so I was familiar with the mental health issue but only on a friend level) during our first 2 months together he went through a hypomanic episode and he allowed me to support him throughout the episode. In December the week of Christmas I was staying over and he asked if we can do it another time because he was going through something so I gave him space even though I was angry because he did this while I was at work at my job . The week of new years he finally spoke to me and let me know he was diagnosed with clinical depression on top of his bipolar and would be MIA for about 2 months. I told him that was fine just so long as he keeps me informed he agreed but that was the last time i saw him. Despite me texting and calling a few days apart maybe about once a week he has only responded once which was January 14th and it was literally just one message (my birthday was the 13th he informed me he didnt forget about my birthday and hes sorry I have to deal with this) I told him idc about my birthday i just wanted to know he was ok. He didn't respond we havent spoken since and hes blocked my number. So idk what to do or if he even wants to be with me. Its driving me insane at this point.
Bipolar Disorder and Ghosting: It's a Big Problem
Candice
This is identical to my story.
Your story resonates so much with me. Seriously, it's like reading my past.
Bipolar Disorder and Ghosting: It's a Big Problem
Catwoman
Hi Hannah. Thanks for an inspiring article. I'm a blogger for BPHope.com and also have an article published in the Summer, 2019 issue of the magazine, titled Taking On The Bipolar Depression Bully. I'm beginning the process of becoming a mental health advocate. Keep up the great work n thanks again!
How Publicly Disclosing Bipolar 2 Affected My Dating Life
Portia
I'm only 22 and I have been on a rollercoaster for the past year. I didn't realize that there was something wrong with me until people around started addressing these issue. I was extremely sad...I just wanted my life to end and now I'm extremely happy. But at least I'm no longer having suicidal thoughts. I just taking this day at a time. Individuals like us have to work harder then people who don't live with this mental illness
Bipolar Disorder and the Importance of Being Independent
Joanna
Our son who is only 16 has recently been diagnosed and now in the process of getting on the right meds. He had a relapse episode and its all very hard for his dad and I to accept. He has always been the model child and has never even had a toothache until now. I have to accept the new normal. Our Christian faith is being tested and not everyone is supportive.

My Life with Bipolar: Why I Share the Experience Openly