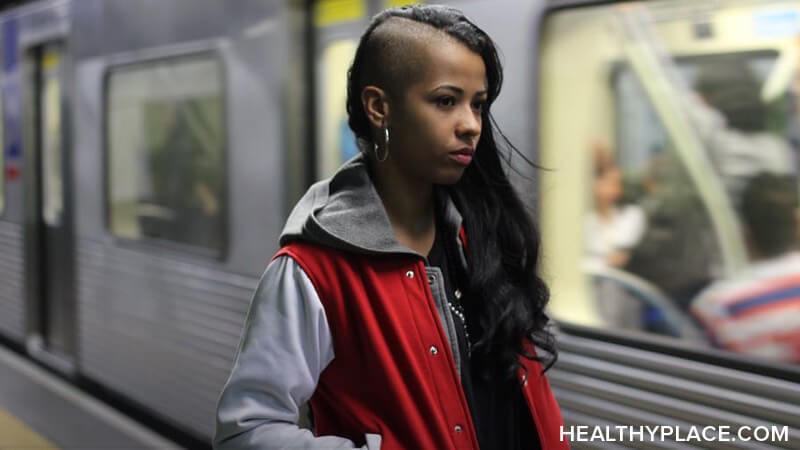 Bipolar stigma is something I deal with, directly or in my surroundings, on a daily basis. As someone who publicly shares their diagnosis of bipolar 2 disorder, I am aware that experiencing stigma more often than usual is something that comes with the job, but to what extent? How much bipolar stigma can a person take before it becomes too much to handle? Experiencing stigma on a daily basis is exhausting, making how to cope with it an important topic to discuss openly.

Stigma of Bipolar is in Your Face

It takes only a few minutes before a news reporter connects a mass shooter to a mental health condition unjustifiably. I go to a party, and the most ill-mannered person in the room is diagnosed with a mental health condition. The label I live with, bipolar disorder, is stamped on violent, deranged and ill-behaved individuals. It is treated as a scapegoat rather than a condition.

When I became a mental health advocate and public about my life as a young adult with bipolar 2 disorder, I started to experience stigma on a daily basis. If I lash back or reacted to every stigmatized comment that is said, I would be too exhausted to open my eyes in the morning. I would have no time to do actual work in advocacy because I would be too busy fighting with people.

I always wonder if people understand that some individuals in this world grew up in environments that caused them to be rude, violent, and hateful. However, when you live with bipolar disorder, as exhausting as it may be, you have to take these comments with a grain of salt.

How to Cope with Stigmatized Comments

When I hear someone talking about another person they dislike, a crazy ex or associate, sometimes it is followed up with, "They have a mental illness!" To which I respond in all seriousness with, "Oh man when were they diagnosed, and with what condition?" The individual with an imaginary psychology degree usually scrambles for words that allude to the idea that there has never been an official diagnosis of a mental health condition.

When people say stigmatized comments, especially those who are close to us, it is usually not done maliciously. Stigma is engrained in all of us. Before my diagnosis of bipolar 2 disorder, as open-minded as my family is (How My Bipolar 2 Diagnosis Brought My Family Closer), I carried the same kind of stigma with me. It was not until I was the one sitting in the chair receiving a diagnosis of bipolar 2 disorder that I realized how damaging stigma is. That's when I had to learn how to cope with stigmatized comments.

My advice to those who are wondering how to help reduce the stigma of bipolar disorder or any mental health condition is to talk about it in a casual fashion, not as someone diagnosed with a condition, but as an individual advocating for justice. This is not to say that I have not, or will not have moments where I am louder than I should be, but I do the best I can to send a clear message. Otherwise, it will only increase the stigma I fight against on a daily basis. As difficult as it can sometimes be, my struggle is my biggest strength, and I use bipolar stigma as my motivation to continue advocating for mental health and my community.

The Future of Bipolar Treatment: What I Hope Will Change
Bipolar Disorder Genetics: From My Grandmother to Me

Karen King
I am bipolar and can’t seem to give it up either. I can go a days without it but when I am anxious (and that is quite often) a couple cigs sure does help. My husband said I had an illness with cigarettes you just can’t quit. I replied yes I do have an illness.
Bipolar Disorder and Cigarette Smoking: Why We Do It
LD
I’m sorry you are going through that. Your situation is certainly more complicated since kids are involved. Maybe talking to someone yourself, regardless if she joins you, will help you. Try to remember that you can’t control her behavior and what she does has nothing to do with you. Good luck!
Bipolar Disorder and Ghosting: It's a Big Problem
Trina
My bipolar bf has been gone for 3 weeks now ghosted me after 3 years deleted me from everything and is off running a muck with his friends getting high and sabotaging his whole life once again. I know this time is the last time I'm letting this continue. But it's hard being thrown away by someone you gave everything too. I don't know how to cope with this disease it's horrible on my mental health.
Bipolar Disorder and Ghosting: It's a Big Problem
B
Jilly G,

Thank you. I am going through the same. Kudos in regard to trying not to take it personally, but the fact I am coming to realize, is that it is personal. It is abuse -- toward you (us). They are abusing personally, and any anger, hurt, trauma, is fully justified -- in the same way we might feel if someone came up off the street and through a punch.

It is directed. It is personal. And it is abuse. While understanding can always help both parties, adults acting in this manner deserve no kindness from those they abuse.

Bipolar Disorder and Ghosting: It's a Big Problem
Jeremy
My mom has a mental illness she's not making an appointment to see a therapist and I would like her to make an appointment to see one she has a doctor and she's not telling her doctor she has a mental illness and I would like her to stop talking to me and no longer come in my room. Calls all her sisters on her phone and tells them there's bugs in parasites in the house and there is not and she comes in my room and tells me that nonsense and there is no bugs and parasites in my room and I'm getting sick of her stupid bug and parasite nonsense.
Bipolar Disorder and Ghosting: It's a Big Problem
advertisement