Manage Anxiety with Food: What We Should and Shouldn't Eat 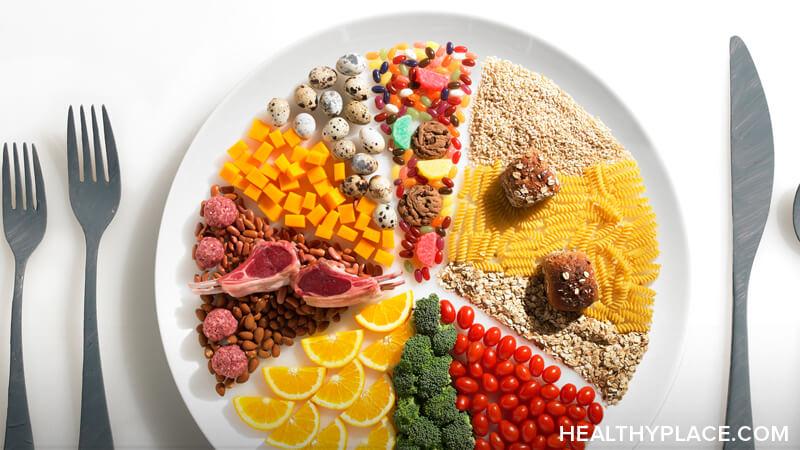 It makes sense for anxious people to manage anxiety with food--after all, we’ve all heard the saying “you are what you eat.” When it comes to mental health, knowing foods that help or hurt you is especially important. Partaking in some foods or drinks, such as alcohol, can make us anxious and depressed in the long term. Consuming others, like the ones below, can calm our minds and help manage anxiety with food.

Omega-3 fatty acids are healthy fats found in foods like flaxseed, chia seeds, walnuts, mackerel, herring, albacore tuna, and salmon. Some herbs also include the polyunsaturated fats, according to SELFNutritionData.com, such as basil, oregano, and cloves.1 In a 2011 placebo-controlled, double-blind, controlled study, healthy participants who consumed omega-3 capsules experienced a 20 percent reduction in anxiety symptoms.2

Serotonin is a neurotransmitter that is essential to gut and brain health. It’s also the neurotransmitter many anxiety medications, like selective-serotonin reuptake inhibitors (SSRIs), act upon for effect. Carbohydrates, such as bread, cause the body to release serotonin, which elevates mood and decreases feelings of anxiety.3 (That’s likely why so many of us want to reach for the cereal, chips, or sweets when we’re feeling down.) Processed or simple carbohydrates, however, can cause mood crashes and excess weight gain so it’s important to choose whole wheat and whole grain carbohydrates as foods to manage anxiety. You get the same mood-boosting effect without the blood sugar roller coaster.

Zinc is an essential nutrient, and most people in the U.S. get adequate amounts of each day, according to the National Institutes of Health.4 However, since it is found primarily in oysters and red meat, some vegetarians may not get enough zinc on a daily basis. Gastrointestinal diseases, like ulcerative colitis, Crohn’s disease, and short bowel syndrome, may also decrease zinc absorption, according to the NIH, as can chronic diarrhea like that often associated with irritable bowel syndrome.

Alcoholics also tend to have reduced zinc levels. Prolonged deficiency in zinc is associated with mood changes and increased anxiety symptoms. Supplementation with zinc helped reduce anxiety symptoms in people with an anxiety disorder in one 2011 study, though it is important to monitor dosage.5 Zinc is toxic to humans at higher levels, so anyone wanting to use supplements should seek the advice of a physician. Using the zinc in foods to manage anxiety may be the safest choice.

If you’re struggling, you may also want to avoid certain foods to manage anxiety. Many people feel they can’t get through the morning (or the day) without that first cup (or three) of coffee, but caffeine has been shown repeatedly to trigger anxiety symptoms, including nervousness, sweating, and increased heart rate.

Ingesting high levels of caffeine, like the amount typically found in around four to five cups of coffee, may even trigger panic attacks in those with panic disorder, generalized anxiety disorder, and social anxiety disorder, according to one study.6 Refined sugary foods, processed foods, and alcohol also are associated with increased levels of anxiety. Limiting or eliminating sugary foods help manage anxiety.

APA Reference
Hackley, S. (2017, October 12). Manage Anxiety with Food: What We Should and Shouldn't Eat, HealthyPlace. Retrieved on 2022, August 17 from https://www.healthyplace.com/blogs/treatinganxiety/2017/10/to-eat-or-not-to-eat-managing-anxiety-with-food

How to Manage Anxiety About World Events If You're an Empath
How to Cope If Hashtag #Metoo Triggers Trauma Memories
Alonzo
October, 21 2017 at 7:32 am

I also suffer from Anxiety its tough to get motivation to exercise but I do follow a strict diet. I also wake up alot and im hot, could that be a panic attack?

Hi, Alonzo ~ Hot flashes can be a symptom of a panic attack (you can read more symptoms here: https://www.healthyplace.com/anxiety-panic/panic-disorder/panic-attack-symptoms-warning-s…), however there are many other physical reasons you may be waking up hot, too. I would discuss your symptoms with your doctor, just in case. I hope that helps! Sarah