When you suffer from a problem like binge eating disorder, you never really conquer all of your demons, particularly those of intrusive thoughts. As hard as you try to keep your thoughts positive and not focus on your body and weight, sometimes there is a spontaneous recurrence of your previous toxic ideas (intrusive thoughts). But when these things happen, and I promise you, they will, you have to take it in stride, realize that these thoughts are not correct and don't need to be considered. Then you have to tell yourself what is actually true. 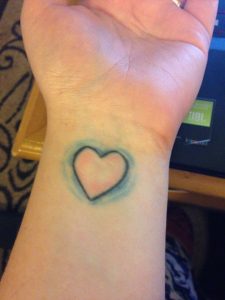 I've been immersed in the dating world for about six months now and it's been fun, but stressful. I recently met someone that I really liked and really saw as having great potential for a relationship. Things progressed to a point and then he made it clear that things were not progressing any further. Disappointed and feeling rejected, I started going through the five stages of grief. When I got to bargaining, one of the things that occurred to me was that I should lose more weight. This was an intrusive thought.

As soon as I thought that, I had to stop and wonder why that idea had even crossed my mind. He had never said anything negative about my weight or my body and had certainly never given me any reason to believe that his lack of interest in dating me was due to my physical characteristics. But it was so deeply ingrained in my psyche that only thin people deserve love and only thin people can be loved that as soon as I was faced with a problem, my oh-so-helpful brain leapt to the conclusion that I had to change my body to change my life.

Intrusive Thoughts and the Lifelong Struggle with Body Image

When I was growing up, society made it very clear what they thought of fat people. They were lazy, useless, and ugly. No one could love them or be sexually attracted to them. In order to be a coveted mate, one had to earn it by achieving thinness. As hard as I've tried to fight this programming and as much as I consciously reject it, it's still there, latent and waiting to strike in a moment of weakness.

Eating disorders are something that never truly go away. As hard as you work to overcome the damaging lies your brain has told you about the world, yourself, and how the world perceives you, the thoughts are always there. Just because they're at the back of your mind, doesn't mean that they've been vanquished, once and for all. These binge eating disorder thoughts can come back intrusively. It's important to monitor your thoughts and be able to recognize irrational ideas that pop back in from time to time. You will always have the intrusive thoughts, but you don't have to listen to them.

I've had an uncannily similar experience with food as you have judging by what you've written. I have Bipolar II Disorder as well.
I just wanted to say that 11months ago, even though I'm at my heaviest (BMI 39), I fell in love with the most amazing man, who fell in love with me. I've never felt so happy with anyone in my whole life. We met through our mutual love of singing with a national chain of choirs in the UK and to be able to share this is fantastic.
I don't think I'd have met him if it hadn't been for me working so hard on loving myself again, and doing the things in life that made me happy. I stopped trying to make other people happy.
You'll find your happy person too!!!! I hope it's soon!

Thanks for your comment! It's definitely difficult to overcome negative thoughts. I'm so glad you found someone. I'm still looking, but I have a prospect on the horizon. ;)

I liked the article. The only thing that I have trouble with is acknowledging that my thoughts are irrational. I don't think or feel they are irrational. And while I am in the Manic phase, as I am now, everything is GREAT. Then, when I start to come down of my high, I get these thoughts back and become depressed and angry.

I totally understand. Sometimes when I get hypomanic I'm on such a tear that I think everything I'm thinking is rational and everyone else is crazy. It's hard to realize that your thoughts are not okay.

I think that when a woman has an extremely beautiful body, it does make her more appealing to men, and men are more likely to work hard to stay in a relationship with a very beautiful woman. That does NOT mean that relationships with beautiful women last longer or are more loving than anybody else's relationships, just that the beauty is a great asset, like having an engaging personality, a great sense of humor, or being highly intelligent. The more assets a person has, the more likely they are to get dates. That's just how it is. You may be a wonderful person with many assets, but if you're a fat wonderful person with many assets, you still probably won't get as many dates or have as many romance-oriented options as a woman who has a great body. Men are only human, after all.

I disagree. While a woman who is conventionally attractive might garner more attention from men, physical attractiveness will not stop someone from cheating on you, nor make someone fall in love with you. Look at all of the beautiful women in Hollywood who get cheated on and left. There is no guarantee that anyone will be loved and cherished, no matter what they look like. Also, what someone finds attractive is not universal. Some men prefer larger women. Some men prefer much larger women. No one should earn or be denied love based on their body type.

I really like this! I can totally relate as a binge eater myself.

Thanks, Alyson! Glad to have you here.