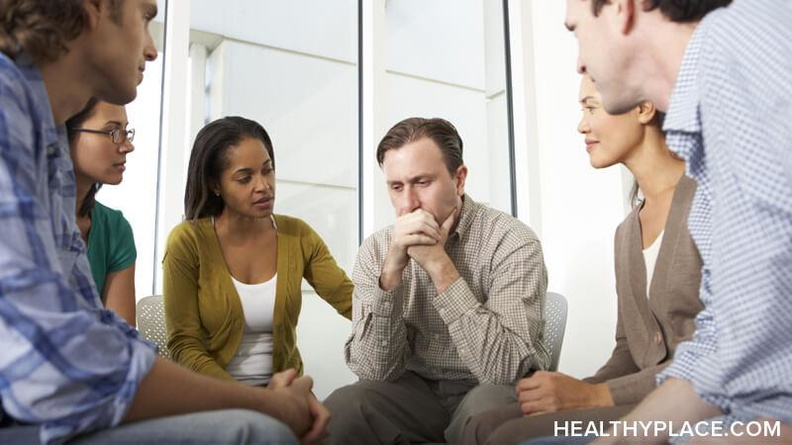 Anxiety is a burden that involves excessive worry and fear. When we live with anxiety and its worry and fear, we give up things in life that were once joyful. It’s not that we want to give up what we love; instead, anxiety is so all-consuming that it’s heavy and burdensome. Anxiety is hard to carry. The following simple short story illustrates just how burdensome anxiety, worry, and fear can be. It can also be a tool to help children cope with fear and anxiety.

Worry and Fear: The Burden of Anxiety Begins

Once upon a time there was a millipede who loved to dance in the sun. This particular millipede would stretch its head up and its body out and would wiggle all of its many legs one by one. When it was warmed up, it would cut loose. Grinning from antenna to antenna, it would tap and swing to the buzz of the bees and the beat of the butterflies’ wings.

It was dancing happily one day as it made its way along the path when someone rushing up. “Why hello,” said the millipede as it continued to dance. “Come join me.”

“Well, because you might get hurt. What if you trip on a rock or into a crack on the sidewalk and break your legs?”

The millipede laughed. “Oh, that won’t happen. Besides, I have so many legs I couldn’t possibly hurt them all.”

“What if you do? Or what if you break enough of them that the doctor can’t fix them? Or maybe the doctor could fix them but it will cost so much money that you’ll be poor for the rest of your life. You need to stop that dancing nonsense immediately.”

The millipede scratched its chin with eight of its legs. “Oh. I hadn’t thought of that. That’s worrisome. I’ll stop dancing forever.”

“Good. Here. Take this pebble and carry it with you as a reminder of the danger you need to worry about.” With that, both insects went on their way. The millipede’s way wasn’t as merry as it had been earlier. The millipede felt anxious. 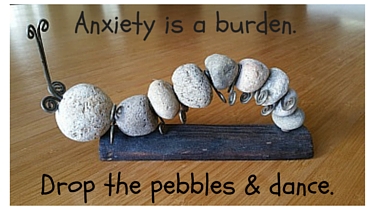 That pebble was difficult to carry, but the millipede didn’t put it down because it was afraid that if it did, it might forget and dance and get hurt and be poor. That made it think of other things. If it broke its legs, how would it help its family? They needed things to survive. And their household shoe budget was outrageous. No. It just couldn’t risk getting hurt (Three Little Known Facts About Anxiety).

All of these worries and more danced through its head, which saddened the millipede because now the worries were the only things who could dance. For every worry, the millipede picked up another pebble. The millipede had so much anxiety that it carried dozens of pebbles in its dozens of legs. It began to ache terribly. And sweat profusely. And feel sick. And its chest hurt. And it was hard to breathe.

One day its anxieties felt so heavy that it found a shady tree and lay down, curling its body around all of its pebbles. It was startled when a ladybug approached, and it jumped high into the air. The millipede landed on its feet and, panting, frantically began to gather the scattered pebbles.

“What are you doing?” inquired the ladybug.

“Gathering my pebbles, of course.” The millipede didn’t make eye contact with the ladybug. It didn’t like looking at others any more (Living With The Cycle of Anxious Avoidance).

“What are they for?”

"Should I answer?" wondered the millipede. "What if this ladybug laughs at me or steals them?"

“Well . . .” By then the millipede had gathered its pebbles, but it was having a hard time breathing. The pebbles were crushing its chest.

“Maybe you’d like to put down all those pebbles,” suggested the lady bug.

The millipede looked up, hoping to get a glimpse of the sun. But it didn’t see the sun. It never did. It saw only its pebbles. It looked down. “I don’t know how.” The millipede sniffed.

“I used to carry a lot of pebbles, too,” said the ladybug. “It was a burden. I learned that my worry and fear were called anxiety. If you want, I can help you get rid of the pebbles.”

“Will I dance in the sun again?” The millipede held its breath.

Anxiety Isn't a Burden You Have to Carry Forever

Anxiety involves worry and fear, sometimes very intense worries and fears. Anxiety has many signs and symptoms; it feels so heavy because it has both physical effects and emotional effects. Yet it is possible to put down the pebbles and, one by one, release anxieties. You can once again dance in the sun.

APA Reference
Peterson, T. (2016, March 17). How to Explain The Burden, Worry And Fear of Anxiety, HealthyPlace. Retrieved on 2023, February 6 from https://www.healthyplace.com/blogs/anxiety-schmanxiety/2016/03/anxiety-is-a-burden-of-worry-and-fear

Can Anxiety Disorders Come from a Traumatic Brain Injury?
Anxiety and Feeling Unlikeable: What Can You Do About It?
Lynn Arnold
June, 4 2016 at 1:58 am

Nice Sharing! Thank you so much for sharing this one really well defined all peaceful info,well really like it,Keep it up! -
anxiety counselling Notting Hill

Thank you for the feedback. :)

I really enjoyed this story. Put things into perspective for me. I went to my doctor once and tried to talk to her. She laughed and told me a few jokes and that everyone "feels like that sometimes." I gave up.. finally it got too much and once I had a new doctor I decided to go back. Now I'm on medication and seeing a counselor. I see my doctor every week to make sure it's working for me. This story gives me hope that I will conquer my anxiety.

Hello Leigh,
I'm so glad that this story was useful and that it gave you hope. You absolutely can conquer your anxiety. Even though it doesn't always feel like it, people are indeed stronger than their anxiety. It's too bad that you had a doctor that didn't fully understand anxiety. She's right that everyone experiences anxiety sometimes, but what she doesn't seem to understand that there's a difference between "ordinary" anxiety and an anxiety disorder. There is a surprisingly large number of doctors who don't realize this. It's great that you gave up on her and not on yourself. Kudos for going to a new doctor, a counselor, and treating your anxiety. You're already traveling down the path to an anxiety free life.

Anxiety was one of the biggest causes of my sleep problems. It truly is a huge burden of worry and fear. I went to therapy to learn how to conquer my worries and fears. It has really helped improve not only my quality of sleep, but also my overall mood.

Hi Michael,
Thank you so much for commenting about your success with therapy. Therapy can definitely be incredibly beneficial for many people. Your message offers hope.