Images of impossibly thin women with micro-waistlines and not a pucker of cellulite swamp the media. Luckily, we’re getting better at spotting the fakes. Thanks to widespread awareness campaigns, we know that, because of Photoshop’s “enhancing effects,” the models we see on posters and in magazines whose physiques seem too good to be true are just that—not true.

But if we are more aware of magazine myths and are getting behind positive body image campaigns like Dove’s, why does the “thin ideal” still reign?

The answer jumped out at me recently from a poster in the children’s clothing section of Kmart. The five-foot-tall high-resolution poster showed five elementary-aged kids modeling summer styles. Its young models were strikingly similar in one respect: every one of them was thin. As I studied the poster, I could just imagine some little girl looking up at it and subconsciously deducing that that’s what her body should look like.

Not all children’s bodies are the same at baseline. Nor will they develop at the same rate. But populating advertisements with only slender children suggests that there is a typical (or at least a “model”) child body type. Children, who absorb information from their environments like sponges, are most susceptible of all to that kind of subliminal message.

The potential consequences are treacherous. One such ramification is eating disorders, which in the United States affect more than 20 million women and men. While eating disorders were once regarded as an illness that affects only young, wealthy white women, we now know that this is false. Eating disorders, which have the highest mortality rate of any mental illness, affect people of all ages, races, ethnicities, and socioeconomic classes. However, that age seems to be dropping, presenting in children as young as six and seven years old. Between 1999 and 2006, the number of children hospitalized for eating disorders increased by 119%. 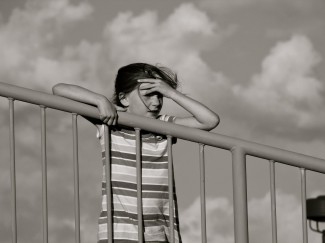 It is still unclear whether other factors are involved in the rise of childhood eating disorders—for instance, whether an increased awareness has helped clinicians recognize signs and symptoms earlier. What is certain, however, is that more and more children are emulating their older counterparts in hating their bodies. According to the National Eating Disorders Association, 40-60% of girls ages 6 through 12 are concerned about their weight or fear becoming fat, and 46% of 9- to 11-year-olds are “sometimes” or “very often” on diets.

Granted, not every young girl (or boy) who worries about body image or internalizes the thin ideal will develop an eating disorder. There are many reasons that people who are genetically predisposed to eating disorders actually develop full-blown illnesses—for instance, stress or trauma. But for those who are predisposed to these illnesses, messages that idealize a certain body type plant seeds that, when watered by other environmental factors, could flourish into a deadly disorder.

Images that glorify thinness are inescapable. They adorn everything from billboards, to TV commercials, to social media platforms. And while some of us might think we’re aware of these ploys and are stronger than subliminal messaging, the youngest and most vulnerable members of our society are defenseless against them. Children are naturally voracious learners—they notice more than we think they do and take to heart more than we want them to. And because they are just children, they haven’t yet developed a critical eye toward such messages, or the psychological tools to cope with the feelings these could prompt. Even if the media doesn’t intentionally target children (although, sadly, they sometimes do), kids end up in the crossfire anyway.

Why Is Body Image Driven Advertising for Children Okay?

As a society, we have come a long way. We know better than to condone violence and oppression. But why is this profit-driven assault on body image not considered a form of violence, especially against women and girls? How is inflicting years of abysmal self-image, with potentially dangerous outcomes like eating disorders, not a form of brutality? Media outlets, retailers, high-profile organizations, and the like have the power to influence cultural norms—and they abuse this power for the sake of profit.

Even though we know that violence and oppression are wrong, we remain tone-deaf to the subtle ways that these “culturally acceptable” forms of violence manifest, such as through a media-driven thin ideal. If more of us view attacks on body image in those terms, we might spare younger generations from years of self-hatred.

Joanna Kay is a New York City writer in recovery from anorexia nervosa. She writes about eating disorders for Healthy Minds Canada and is the author of The Middle Ground, a blog that deals with issues facing people who are midway through eating disorder recovery. Find Joanna on Google+, Facebook, Twitter and on her blog.

Why Do Kids Have Attention-Deficit Disorder (ADD)?
Social Media and Your Kid’s Self Esteem
Carrie
August, 25 2014 at 3:43 pm

Honestly, I think the only way to start fixing this monster we have created is to take all people out of adds. I seriously do not need to see a person in clothing to know that I need new pants :/