Can You Protect the Children from Domestic Abuse?

Years ago, I bore two sons into my abusive marriage. Young and naïve, I thought my husband would change into a loving man when he felt unconditional love from and for the children. I thought that real love would end his cruelty toward me, and that he and I would create a loving family. I thought wrong. 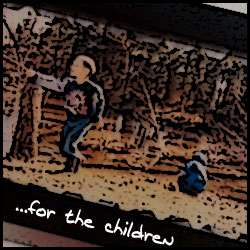 Somewhere in my denial, I came to believe that if I could make him love me and show him how to love others, then we would all be happy. To make happiness a reality, I would need to erase the bad things that haunted us. Erase the behaviors that ingrained themselves into our lives and psyches.

Erasing the damage caused by domestic abuse is impossible; healing from domestic abuse can happen, but I can never erase the emotional and mental abuses my children absorbed.

Impossible to Protect the Children from Domestic Abuse

Here is a story I wrote years ago about my attempt to protect the children. Do you ever feel this way?

We have no warning; we huddle in the dark as the tornado howls and screams and pray the storm will silence itself. There in the blackness, I press myself between them and the storm, protecting them, I think. But the turbulence and violence of the storm's deafening words leave subtle marks on their faces and deep welts on their hearts. The storm feels terrifyingly never-ending, but eventually it moves away into the distance.

As the fear of the storm clears and the sun returns, I look at the faces of my children. We smile at one another and pretend that the sunshine is here to stay. But beneath our relieved sighs lie jangled nerves. We glance about nervously to see if the storm is truly gone. We move about, hug each other, love each other and try to form peace by preparing for the next storm.

And after I feel prepared, after I think I've armed my children and myself with the necessities and fortitude to withstand another stint in the screaming dark, I feel a little better. The children know I feel better. They believe the storm cannot ever hurt them again. We let ourselves be ourselves. We relax and we laugh.

But eventually the storm comes back stronger and smarter. It takes out the necessities first, and then sets its violence to breaking down the fortifications I thought were impenetrable. Brick by brick by brick, we are exposed to the winds, the icy hail, the feeling that someone took the floor out from under us.

The storm tosses me through the black air, and wildly I grasp for the children I vowed to protect. But I am unable to hold them, unable to shield them and unable to prevent them from believing it is better to be the storm than the mom.

Hindsight Wisdom to Protect The Children - Your Children

In hindsight, the lesson is clear: I hurt my children and myself by staying with a person who abused us. There was no way to protect the children. I couldn’t even protect myself. Now my children must wrestle with the thoughts of who they want to be -- the storm or its victim. There doesn’t seem to be another choice when those two examples are all they’ve known.

If you live with your abusive mate for the children, please think again. It is better for your children to have two homes than to have only one abusive home where they never feel safe and cannot escape.

APA Reference
Jo, K. (2014, October 27). Can You Protect the Children from Domestic Abuse?, HealthyPlace. Retrieved on 2022, June 27 from https://www.healthyplace.com/blogs/verbalabuseinrelationships/2014/10/protect-the-children-from-domestic-abuse

It is true that children should be prevented from the domestic abuse as it will mentally hamper them badly from their normal development. To come out of this problem visit to PFF as it is completely dedicated to teach the parents related to this field.

Hi there Kellie-
You are a great writer, and you had me until this very last line- "It is better for your children to have two homes than to have only one abusive home where they never feel safe and cannot escape."
I am sorry to report that my nonprofit is on the front lines of a terrible crisis in the family courts, where survivors of domestic violence routinely tell me that they wish they had NOT left their abusers because they had no way of knowing that once they left, and ended up in family court trying to protect their kids, that they would end up LOSING CUSTODY of their kids to the abuser.
I know that it sounds insane and impossible, but in fact, what ends up happening to more than 58,000 children each year in America is that they end up being forced by family courts (which are supposed to protect kids from violent homes) into unsupervised contact or full custody with their violent abusive parent, and in many cases, their safe parent, the harbor in their storm, ends up being stripped out of their lives and punished for trying to protect the kids.
I am sorry to be the bearer of this bad news, but I think it is important that you NOT assume that by leaving your violent partner, you and your kids will end up with one safe home and one dangerous one. Sadly, a growing number of innocent kids are being forced to weather these horrific storms inside the homes of their abusive parent without any protection whatsoever.
Check out our website to see videos, read articles and learn more about this crisis in America's divorce courts.
Kathleen Russell, Executive Director

Kathleen, that DID happen to me. My ex retained full physical custody. My children were over 13, so despite the court order, they both stayed pretty much where they wanted when they wanted. Unless the abuse victim is denied any visitation at all, I do believe 2 homes are better than one. I'd like to talk more with you about your non profit. Could you email me at verbalabusejournals@gmail.com?

Please, never stay with an abusive partner "for the sake of the children. Children never ever get over seeing their mother beaten. We think we should protect her. We think it our fault our Dad turns into a monster. If we were just good enough, everyone would be happy. If we had not done something wrong, Dad would be happy. Then he would not get angry and hit Mom - or us! Worse, as time goes on we think this is normal. Some of us become abusers too. Some of us become doormats. Make it stop with you while we are young. While there is still hope for our future. We'd rather be poor and safe than richer and endangered. Please, take us and go!