Taking A Stand Against Abuse Requires A Touch of Fear

I feel responsible for teaching my oldest son that it is all right to act out physically when things don't go his way. I allowed him to watch his father and I perpetuate the cycle of violence in our home. I didn't walk away from my marriage as soon as I now wish I could have. My son learned that when a grown-up man doesn't get his way, it is normal for him to physically intimidate everyone around him until they submit to his wishes. Then, it is okay to forget it happened without an apology or discussion so long as some of his behaviors improve. So long as he turns on the charm and pretends to go along, there is no need for further conversation or remorse.

The other day, an argument with my son reminded me that doing what is right makes me feel as scared as doing what is normal makes me feel numb. The altercation began with Marc's violent push of a full coffee cup that spilled across the table, instantly dripping into the laps of all who live in our home (except for Marc's). The four of us immediately jumped up from the table in surprise; I instinctively ran to the kitchen to grab a towel to clean up the mess.

Then I felt scared. This situation called for action. Real, true, make a difference action. It was time to do what was right instead of what was normal. It was time to react in a way that would not trigger further violence at that volatile moment, yet stand firm for what was right. It is right for all of us to feel safe in our home. It is right to take control of myself, to guide myself in a healthy way away from numbness so I can protect the innocent people in my home (self included), even if it is scary. 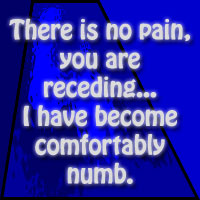 Over the past few months, I've fallen into numbness; I told myself I was detaching from Marc's behavior, but I wasn't. I was going along with what was normal for me to do during the 18 years I was married to an abusive man. I fell into my old habit of numbing out to "help" me deal with my son's behavior.

Detaching feels different from numbness. Detachment feels empowering, similar to a prescribed medication that lifts me from Depression without taking away my emotions. My anti-depressants allow me to feel every emotion from sadness to joy but do not allow any one emotion to blind me to reality. Un-medicated or numb, my emotions (especially sadness, worry and fear) overtake reality. I cannot move past the negativity to find solid ground; reality becomes dark and horrible instead of changeable and temporary. Detachment allows for movement and solutions; numbness allows only for my "existence", and existing saps all my energy.

In the beginning stages of numbness, I am productive. I continue on with my responsibilities and engage my loved ones in conversation. I feel good about the future, I feel able to handle myself well. I feel attached to everyone who is not causing a disruption of some sort, and ignore the one who is doing the disrupting.

As it gets harder to ignore the disruptions caused by the troubled relationship, I sink further into myself, looking for the "peace" within. It is almost impossible to believe there is peace within when the world outside of myself requires so much energy to ignore. I begin playing computer games, zoning out into a world that requires no thought. I ignore my thoughts even though my emotions tell me to pay attention. Eventually, I ignore my emotions. Ignoring so many warning signs takes all of my energy. I lose my productivity, I lose my ability to communicate, I lose my Self.

This scared feeling of doing what is right is temporary. Fear - fight, flight, freeze - is practically the exact opposite of numb. As I begin to pay attention to the troubled relationship with my son, every suppressed warning sign comes rushing into consciousness with such force that I feel out of control of my Self. I feel terrified that all the warning signs that I ignored will culminate into disaster immediately. I picture Marc dead. I picture myself dead. I picture my youngest son refusing to visit my home because he is uncomfortable.

But instead of allowing fear to control me as numbness did, I choose to step back from the fear just a bit so the reality of my situation can reveal itself. From this place of not-panic, I am choosing to do things that will help.

These actions are game changers. They reflect my desire to do what is right even though Marc may see them as hurtful. I am afraid still today, but not as afraid as I was 12 hours ago. I won't be this afraid in another 12 hours. I am remembering what it is like to put an end to violence...it is hard, treacherous, and anxiety provoking. But in time, the fear morphs into empowerment. I will realize that courage feels scary, but cowardice is the only emotion that can kill my spirit.

Holiday Madness
How to Recognize Signs of Abuse in Your Friend
Gabriel
December, 21 2012 at 6:09 pm

Kudos to you for ultimately taking a position of power in this struggle. My mother endured such abuse even more so in the real sense of physical abuse as did I being the youngest and weakest of the litter; so to speak. Men more often use mental abuse or physical intimidation and abuse ala heavy hand to get their way. Many women use complaining as a way of control or taking away intimacy. Both ways get essentially the same result. Abuse comes in many forms and ultimately it's root cause is one person attempting to oppress; suppress and/or have control of another and any given situation.
None of which are fair or constructive. I am sorry you went through a difficult time in your marriage and I am especially sorry to hear of your dilemma with your son.
I on occassin have acted out as my father had too a far, far lesser degree and generally it came down to name calling or labelling. Rather childish and when it would happen Iwould feel terrible and always apologize and make amends where possible. person has to want to change something they dislike about themselves especially when the behaviour is truly not of their own spirit. It can be difficult to unlearn something that was played out hundreds of times in front of you as a young person. I have learned to look at it this way now; that I am better than that particular behaviour and that I do not own it nor does it own me. I have found that calmness of spirit is where the power to suppress and ultimately rid oneself of a poor or bad habit and or characteristic of one's personality. That which we learn can be unlearned. I will say it isn't easy by any description,yet it is worthwhile. You'd think at 54; a person would have learnt all the lessons in life already and improved all their behaviours and general conduct.
For me it took losing an opportunity to be with someone I cared for very much to see what needed eliminating, what required changing and what needed improving.
Therapy can be a constructive tool especially if you get a good matchup between your son and his therapist. Young people have such a difficult time knowing and learning to have control of their emotions and generally fear and anger are the larger, looming ones. I so wish education would offer courses beginning in elementary and moving up into high school that would see young children learn good strategies and effective ways of living with others and dealing with emotional changes within.
I too take anti depressants to level the playing field for the same reasons as you list. If you get this message this evening; David Letterman will be on with Oprah discussing his depression. It looks as if that will be a good show to watch. There remains so much misinformation and stigma out there abour depression. Take care and I salute your courage.

Erin, thank you. To everyone else, Erin is my little sister and she supports me no matter what! <3

Dear Kellie - I read this and oh my gosh I recognize so much that is me from you that I hadn't much thought about but see that this is what I do. My son is 14 - not violent - but does overreact when angry, does not give me space when I am and answers back not always in a nice way. I am now taking him for task - but when I had cancer I didn't have the strength too but I also know I have to do the right thing now or it will be too late. Saving grace is that his father used my son as a tool in his last bid to hurt and hate by denying himself that he was a father to his son, but then he abused us both. I do worry for the future and what my son may turn out to be but hope go there in time?

I believe in my heart that there is always TIME. It will be difficult, but you can do it, Belinda!
It took time to teach my sons these things, and it will take time to teach them that I no longer play that way. I can't blame Marc for trying...it worked so well for his father! I do not know what the future holds, but I will always attempt to undo his past learning with love, even though I will make mistakes along the way.