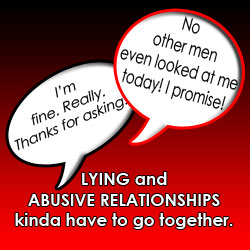 There were many times that I flat out lied in my abusive relationship. I mostly lied about who spoke to me at work, hoping to avoid his jealous tantrums. But that was almost two decades ago, back before I ended my military service to enter Service to My Husband.

When I became "Will's Wife" exclusively, the abuse increased. I soon had our first son and the abuse increased again. The tighter I bound myself to him, the more fiery his outbursts became and the more outrageous were his lies. I pretty much gave in to him to get him off my back, but acquiescing didn't solve any problems.

Giving in is a lie of a sort, too. I found the more that I gave, the more he took. It wasn't long before I had agreed to a hundred of his facts that were not true. He slowly stripped me of my identity by wearing me down. I often lied to get him to shut up, to stop insulting me, to have an enjoyable evening.

Suddenly, he deployed to Cuba and my son and I lived in blessed peace for a while. One morning during his deployment, I woke up happy. I just laid there in bed turning the feeling over in my heart, enjoying it, listening to it. Yep. Happy!

It was in this carefree state that I began the biggest lie I ever told (or didn't tell) my husband. I had an affair. There's no backstory to my affair that you haven't heard before, so I'll skip the whys and say that my guilt over the memory of it kept me loyal to my husband in body and spirit for the remainder of our marriage.

Even so, I do not regret my affair. It afforded me two months of peace and harmony in my otherwise disordered life. Jacob helped show me that I was lovable, despite what my husband said, and that I could be happy (once out from under his influence). Jacob reminded me of who I was before meeting Will, and for a very brief time span, I was free.

I was dishonest, but I was free. For a while.

As soon as Will returned, my guilt kept me glued to him. Despite Will's infidelity during his deployment to Cuba (and all the following infidelities), my guilt was as strong as my love and it got to the point where I couldn't tell the two apart. Will got away with a lot of nasty things because of my love/guilt for him.

Anyway, minus the affair, I did way more lying for Will than to him.

I completed Army correspondence courses until I maxed out his promotion points on them. I completed three college classes online for him. I completed the defensive driving course for him, too (his only punishment after his DUI was forced into "deferred adjudication"). All of those lies enabled him to receive his promotions sooner.

I glossed over his abusive temper to friends and family who could have helped me. I told our children, "Daddy didn't mean to hurt your feelings," when the opposite was true. And the biggest lie I told for him was to myself: I called him my hero, my role model . . . I wanted to be like him. All of those lies were unconscious ones. I said them to myself to hammer down the fear, anger, and unhappiness boiling inside of me.

Considering all the lies I told, you may think that maybe I didn't leave him with an honest bone in my body. It is true that honesty took a beating during my marriage, but through it all, I believe integrity - the truth as a whole - remained. I never lied to hurt Will or anyone else. I never lied to manipulate or coerce him into doing anything against his will. I lied to protect my family, my marriage, and Will. I lied to protect myself from his rage as well.

However, looking back over my hell of a relationship, I wonder what would have happened had I told the truth. Maybe it would have ended my marriage before we hit the four-year mark, and that, my friends, would have been a blessing.

I'll end this with two quotes from Mark Twain and let you ponder the truths and lies you tell to yourself and your spouse. Is it better to lie or tell the truth? I think it falls on each of us, considering our individual situations, to decide.

"An injurious truth has no merit over an injurious lie. Neither should ever be uttered. The man who speaks an injurious truth, lest his soul be not saved if he do otherwise, should reflect that that sort of a soul is not strictly worth saving."

"It is not worth while to strain one's self to tell the truth to people who habitually discount everything you tell them, whether it is true or isn't."

I can relate to this right now. My partner has become very emotionally abusive. He believes that I cheated on him for the whole 30 years of our relationship. He says things like I know you have secrets and are telling me lies. The more I denied it the more angry he got and made threats to leave. I was so worried about him leaving that I lied and said I had cheated on him with work colleagues when I didnt. He then started to listen to me and wanted more and more. It then got to the point where he asked me to write everything down so he could read and process it. When I refused he became angry and threatened to leave again so I did what he asked and read it out. When I read it out he proceeded to record me without me knowing.
It has got to a stage where the lie is escalating and getting out of control and he is asking for more explanation saying he knows everything even though it did not happen.
I said I wanted to leave but he made threats to go to my work place to cause trouble.
I am so worried about what's going to happen because I have not done anything.

Your story makes me feel so much better, but sad that so many of us are going through this. I'm still in it, wondering why, and how could I ever be anywhere else. I have had years of therapy which has helped, but I'm still here - I don't know how to leave!

This is very relatable and I see myself so much in the account. However, the one thing I have experienced is an impulse to lie and to hide even after being free of the abusive relationship. This is devastating to me because I have always been honest to a fault. Wondering if this might be an experience others have had as well. Therapy and self reflection are m my tools to heal, but the path is steap. Thank you for sharing your story.

This is my current ongoing struggle since leaving the abusive relationship finding myself in moments of anxiety getting defensive and lying when there is no reason for it. Just feeling like I’m going to be attacked for some unknown slight. My current partner is loving and supportive and has done nothing to cause these actions. I’m struggling with breaking this cycle, this anxiety.
Has anyone else struggled with this and found a way to break this pattern.

Thank you for writing this. It made me feel a little less alone in my situation.

It has made me feel so good to read this. It is just like my life and my story. I will forever, hold this in my heart.

[...] and relax, making it look like my fault instead of acknowledging the injustice done to me. This is a tactic of power. It undermines the protests and does a great job of shutting me up. Exactly what that person wants. [...]

I love how you compared "military service" to "Service to My Husband". It is so true.
Actually, I think the military was more relaxed and enjoyable than the service to your husband. He had so many hidden mind games that if you didn't figure them out - you were in trouble.
At least the military put it all out there in plain sight.