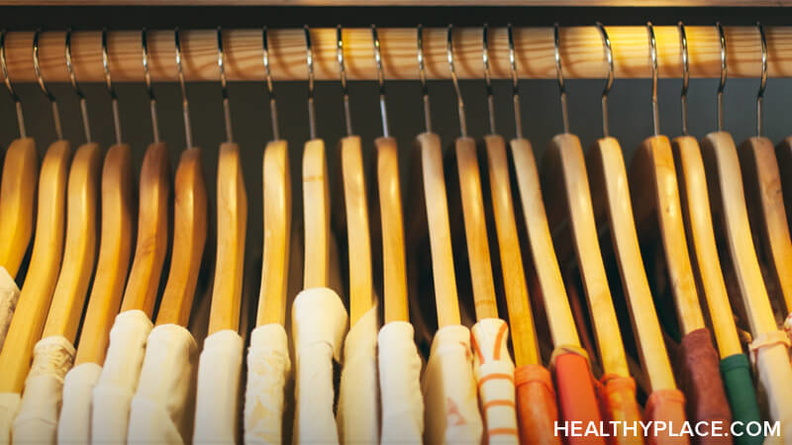 Years ago I worked for a pharmacist who had obsessive-compulsive disorder (OCD). I only spent about 20 hours a month with him and didn't immediately notice the struggle he lived with every day. But by the time he was snatching prescriptions bottles out of my hand as I was ringing up customers, dumping the contents out, and counting the pills "just one more time," even I was having trouble coping with his obsessive-compulsive symptoms. After closing up the pharmacy one night, we said goodnight and he left. I took my time gathering my things from the back room and was headed for the door when I heard loud banging. Alarmed, I followed the sound and found him throwing his body repeatedly against the locked counter door, unable to trust that it was securely fastened. Watching him that night, I clearly saw the distress OCD can cause.

Rachel McCarthy James lives with OCD and shares what coping with obsessive-compulsive symptoms is like for her.

Living And Coping with The Symptoms of Obsessive-Compulsive Disorder

My name is Rachel McCarthy James, and I often go by RMJ. I'm a tutor, blogger, and occasional freelance writer who blogs several times a week about feminism and stuff at deeplyproblematic.com. I 'm 24 years old. I grew up in Kansas and currently live in Virginia.

Looking back, I have long had obsessions, anxiety, and intrusive thoughts. These went undiagnosed and unnoticed for years - I would often worry and create elaborate fears, but I kept them mostly to myself for fear of being seen as weird. I was diagnosed with Attention Deficit Disorder when I was about 13, but no one mentioned Obsessive-Compulsive Disorder even though some members of my family have it. The clearest outward symptoms of OCD began around age 15, when I began to obsessively pluck at my eyebrows. Though I continued to struggle with this, it wasn't a big enough problem to seek therapy.

My symptoms, particularly obsessive and intrusive thoughts and some ritualization, began to present a real challenge about two months after I started taking hormonal birth control at the age of 20. I had moved back home and away from my social circle. Soon after, I began to have obsessive intrusive thoughts, with some ritualistic compulsions and trichotillomania. I saw a therapist for a few sessions, who diagnosed me with generalized anxiety disorder and suggested that I might have OCD (though she did not officially diagnose me). I discontinued taking hormonal birth control, and while my obsessive-compulsive symptoms did not stop, they were manageable.

A couple of years later, in the middle of winter and a couple months after taking emergency contraception, my intrusive thoughts returned in full force, leaving me depressed and constantly anxious. I connected these symptoms to my earlier bout with OCD, and realized that I needed to seek treatment for it. I was lucky enough to have insurance at the time, so I had about a half-dozen sessions with a social worker who taught me some coping methods that helped a lot, particularly visualization exercises.

I have not sought any treatment for OCD since winter/spring 2009, though I still have to deal with "flare-ups" pretty regularly. I have a number of tools for self-care when I notice that I'm plucking a lot, obsessing, getting anxious, or losing sleep over an unlikely scenario (usually related to my health or my Internet presence in some way), or obsessively "checking": I confront it, I go easy on myself, I do my visualization exercises, I eat better, I exercise, I take breaks from the Internet. I don't have a set method that I go through each time; though I have some obsessions with rituals, I'm not a routine person. I just make sure to check in with myself and my mental health.

I'm not earning much right now, and I don't have any insurance, so I can't afford talk therapy. If I were in a position to do so, I would likely see a therapist on an irregular basis. I plan on seeing one regularly in a few years before I get pregnant - my issues are usually related to hormonal changes, so I'm planning on focusing on doing a lot of work on my mental health before that experience. I've never done very well with pills, so I've never sought them out to treat my Obsessive-Compulsive Disorder, but they're certainly an option in the future.

PTSD: What's It Like Living with PTSD?
What Science Can Teach Us about Addiction Recovery
Mignon Schlinger
October, 19 2010 at 1:33 am

Hello, I just i thought i'd leave a comment in order to thank you for posting this, I found it very useful. I've included your site to my favorites and I look ahead to reading more of your posts.