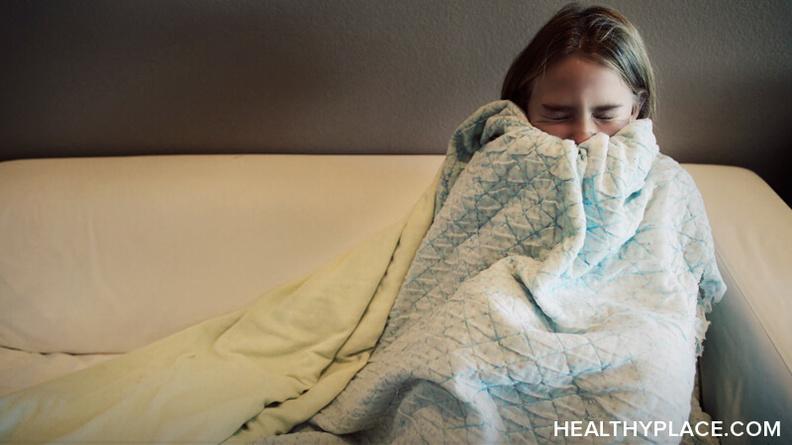 The general public used to associate PTSD, post-traumatic stress disorder with soldiers in war zones. Now we know that anyone who has been in or witnessed a consistently highly stressful, traumatic or life-threatening situation can develop PTSD. And in so saying, life for Melissa has been anything but kind. Exposed to all types of abuse since the age of five, Melissa finds living with PTSD a living hell. But she's taking positive steps and getting treatment for PTSD.

An Inside Look at Living with PTSD 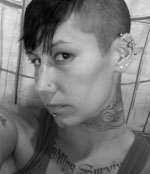 My name is Melissa. Do you really want to know what it's like living with PTSD? Here we go.

I am 29 years old. I work as a nanny for my nephew at the moment. I am on disability, and have been since 2005. It's hard for me to have a "real" job due to my depression, anxiety, and eating disorders. When I was working a real job at a hair salon, I couldn't handle it. My anxiety got so bad that I couldn't even breathe. Being around big crowds scares me and I feel that people are always staring at me for some reason. I have really bad social anxiety.

I first noticed the symptoms of depression when I was about 15 years old. At age of 16, I developed anorexia nervosa. I thought it would help me cope with my life struggles.

I had an abusive father all my life. I can remember things from when I was 5, all the way till when I was 16; that is when my parents divorced. My father would hurt me in so many ways and I didn't know how to deal or cope with what was going on (What Is Child Abuse? Child Abuse Definition). So at 16, I slowly stopped eating. Eventually, my eating disorder was out of control and taking over my life.

My mom didn't want to see what was really happening. Finally, when she did, I started to see a therapist and a doctor who prescribed my medications. At 16, I was diagnosed with anorexia/bulimia, PTSD, anxiety disorder, and borderline personality disorder. My symptoms started when I was about 15, maybe even sooner. The PTSD symptoms got really bad - flashbacks, nightmares and night terrors almost EVERY night (take online PTSD test). I couldn't sleep at all. Insomnia was and still is a major thing I deal with. I have to take prescription sleeping pills every night just to get myself to sleep.

My flashbacks started getting really bad and out of control, where i felt like everything was happening ALL over again. I had a boyfriend when I was 18, and he died on April 26th of 2000 in a car accident. That had a major toll on my health and my emotional state. I felt that it was all my fault. I blamed myself everyday and I couldn't sleep because I would have nightmares. And when I would try and sleep, I would flashback to my father being abusive. After he died, I no longer dated guys, I began to date only girls and still do.

Goodness, I can go on and on about so much that has happened in my life. Thirteen years later and I am still in therapy. I've been through inpatient and outpatient therapy.

Recently, in therapy, I have started to dissociate very badly and also when I am alone (read the Dissociative Living blog). Sometimes it's impossible to get me grounded back to a normal state because I've gotten so upset about a situation and then I start to panic. I feel like I am crazy a lot of the time and that no one understands me or what I am going through.

I have made YouTube videos about PTSD, eating disorders, abuse, anxiety, depression, self-injury for years now [Unfortunately, Melissa's YouTube Channel was hacked and no longer exists]. I also suffer from self-injury. Making those videos is a POSITIVE outlet for me to cope with my issues and also to help others with the same illnesses and psychiatric disorders. I have very low self-esteem and I hate myself most of the time. I NEVER feel good enough, so I keep to myself and I am VERY shy!!!! It's hard for me to make friends because I don't go out much at all. I just hope to one day be able to eat "normal", to not be scared ALL the time about stuff. I just want to be happy and be able to live the best life that I can.

Adult ADHD Diagnosis and Treatment: Why Things Can Go Wrong
OCD: Coping with Obsessive-Compulsive Symptoms
Ralph Michael
September, 24 2010 at 7:41 am

I was emotionally abused by my father until he left when I was 5 1/2 years old and I never saw him again. I have MANY memories of the abuse when I was three or four. I've never been able to have friends. I've been married six times - I can't hold a relationship together. I've had eating problems all my life. I have no contact with my only sister (dad love HER), I have very little relationship with my kids so I never saw my grand-daughter until she was 13 years old and her brother was 10.
I've seen too many psychologists, psychiatrists, and licensed clinical social workers. I've tried too many perscriptions medications. I've been told I suffer from PTSD, severe depression, bipolar disorder, and that I'm just plain anti-social. I have sleep problems. I sleep 5 or 6 hours a night and usually wake up every hour, sometimes every hour and fifteen minutes. On rare occasions I will sleep two hours without waking up and taking note of the time on the clock.
I'm still alive at age 60 even though I've had thoughts about suicide many times. I don't see any doctors or take any medication now. I gave up on all of that and just try to make it through each day. Some days are good, some not so good. I also have anterograde amnesia caused by a head injury in 1975. I can remember everything before the injury but not since. It's a mild case, so I can remember quiet a few things but my current wife will tell me of places we've gone and things we've done and I have no memory of it at all. I can't remember how to get places. I sing in a choir every Monday night for 22 weeks a year and I don't know the subway stop to get off at or how to get to the church once I'm out on the street. But I'm still here, still alive, still fighting.
If I could have one wish in this life, I wish my father was still alive and I could walk up to him and ask him why...... just "Why dad?"

Hi Melissa,
That's so terrible everything you have gone through!! During my own healing from the things I've gone through I have come in contact with some VERY helpful people, clinicians and authors. Books I recommend that shed light on A LOT and help my healing are:
The Betrayal Bond, Patrick Carnes Ph.D (explains what Trauma does to people)
Women who Love Psychopaths, Sandra Brown, MA (goes deep into explaining about the different personality disorders and how it relates to the abuse we suffered)
Dialectical Behavior Therapy, Marsha Linehan... this is the Ultimate tool to help people with BPD manage their traits in order to lead lives worth living!!
Much healing friend!!
Ana