Living with Dissociative Identity Disorder: DID Diagnosis and Stigma 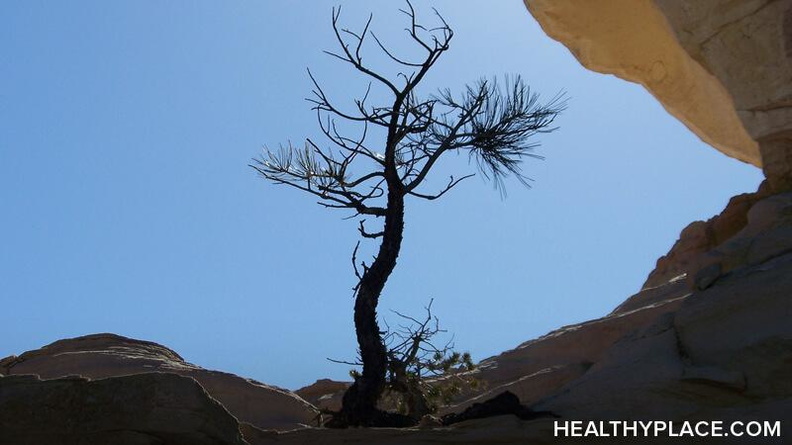 Maria's story of living with dissociative identity disorder (DID) is a riveting one. She chronicles living with DID both undiagnosed and diagnosed, then dealing with the stigma of DID.

Maria, our guest on the Misconceptions About Dissociative Identity Disorder video, wrote the following post for HealthyPlace.

My name is Maria. This is my real name given to me at birth. I was born in 1959 from Italian and Arabic heritage. I have one sibling. I was, at times, surrounded by a big extended loving family. My mom was what was called in those days "Brittle Diabetic." She was also a paranoid schizophrenic. The onset, it seems, came when she was very young. For her, she was unable to be a mom or a wife for long.

My life with my parents was very turbulent, often very unsafe, and very isolated. I was a caregiver (both emotionally and physically) to my mom from my toddler years until her death. I lived in many homes, often moving five or more times a year. My mom was often in the State Hospital, mental facilities and medical hospitals.

I was married at age 20 for a short time and later divorced. I am now 50 years old and the mother of grown children.

I had seen a counselor in high school to discuss my home situation. I saw him three times a week to talk about home and how I was managing. I was unsafe at home, everyone knew it, yet by high school my attitude was very stoic, like what's the fuss?!

I made it through school and out of the home I lived in. In my mid 20s, after my divorce, I was working several jobs and going to college full-time to be a Social Worker while raising my children. I remember a college paper assignment requiring that I list ten good memories from before the age of 10 and ten bad memories and how those affected my adult life. l also had to tell my fellow classmates about myself. I had no idea who Maria was and I had no memory. My memory began at 17 years old .

I went to therapy once a week to discuss my memory problem and anxiety I was having. I experienced some panic attacks (from trigger issues) and had trouble sleeping. I had seen several therapists before this, and always been told I had grief, stress, loss and anger issues that I needed to confront stemming from my mom, past abuse and other obvious childhood problems, but I refused to discuss my past or confront any anger or grief.

A Caring Therapist and a Multiple Personality Disorder Diagnosis

This new doctor did not push -- just made me comfortable to speak, befriending me at times as a colleague. Because of his respectful approach, with some gentle nudging, I felt comfortable sharing different aspects of my life. And, for the first time, I also felt that I could share the existence of Toni, an alter (we call a person) who existed since I was two years old. Toni felt "safe" and introduced herself to the doctor, admitting she made the appointment to come in and was there during the initial intake session. We actually had been having a bit of co-sharing awareness. She was aware of me. I really thought I saw her as a child, but never knew who she was.

After several further consults , studies and evaluations with various doctors who ruled out everything else first, I was finally diagnosed with multiple personality disorder, now referred to as dissociative identity disorder (DID).

It was 1989. I was in a psychiatric unit at the University of Rochester, called the R-Wing, where Dr. Goldstein, a specialist running a 'Multiple unit' consulted further with his colleagues.

Stigma of Dissociative Identity Disorder and Its Impact

This diagnosis carries a lot of controversy among people with multiple personalities, doctors and other mental health professionals. There are many distorted media depictions of life with dissociative identity disorder which has created fear in me, my family and the general population. There are books written on the subject suggesting long tedious recoveries and not much hope of normalcy. Most of this information stems from a few groups and how multiple personality disorder was originally presented vs. modern-day research on the subject.

What I, and this group of people within me, have learned after losing everything precious to us (like mothering our children, employment, respect, normal rights) because of a misunderstood label, is you can have dissociative identity disorder, you can be multiple and still manage as a healthy citizen, parent, wife or husband and so on...as long as a group learns tools to communicate and manage the symptoms of the disorder. I have learned to properly use inner dialoging, journaling, and sharing body space and time. We are all happy, co-consciously existing, sharing memory together. Another option is integration of alters, where nobody is lost.

After all these years, it is not odd when a 'switch' or transition between one alter or another occurs. It is quite subtle, normal to us and even our loved ones now. We do not dramatically or sharply switch because we no longer fight and fear it, nor does it come with announcements, calling attention to switches or 'switch on-command' like circus show entertainment.

Our endeavor is to help younger groups, as well as psychiatrists, therapists and other medical professionals, as well as partners of those with DID who may encounter groups to know that multiplicity is another way of life and usually becomes a disability only when the person becomes highly stressed over being a multiple; fearing it, trying to control or stop switches and remaining hidden -- furthering secrets and shame associated with the stigma of dissociative identity disorder.

Our name as a family group or system is 'Mosaic Gang' - not because we see ourselves as pieces to a greater whole or a puzzle, shattered, fragmented or broken, but simply because we each share in liking to do collages and mosaics.

Thank you,
Maria and The Mosaic Gang

Hi Sera Thank you so much for replying to this. I hope you did watch the show and found something useful.I totally agree, a sense of humor is so useful in all areas of life and I do keep one handy , my motto better laugh then cry always although it releases the same endorphins I tend to get a headacjhe from tears dontknow why and also we can laugh till we cry so there ya go..I also know very much what you speek of , in regard to having a public face , selecting 'a look' the public sees, its a shame we must do this, yet many groups do ,to present 'singular' and must the "desease manatality with everything is a whole other show ,its like the' abuse excuse' it gets tiring for me, all behaviors can be worked on and changed, all thoughts moderated and renewed in one mind or with several minds exsisiting in a body.
I think like this..Corperations hire motivational speakers to come along and motivate large groups, of entire companies , to increase sales , to cooperate working together , to be' team players' and do well advancing, and it works - the same thing can happen with multiple groups..I think Therapist Psychatrist need to know te hope lies in a group knowing , communicating not alway going back alway yes its needed but some can get stuck there , but to keep going forward I hope you will come see us at Myspace at- Mtgraceful..and Youtube- "awesomeastrid I also hope your husband watches with you,and will hget to know all of you better
I am sorry it took ao long to respond to you I did not know this reply comments part was even a option over here near show blog notes ,till I cam back to reread it. I wish this was at the actual show clip site I wish you well in your endeavers through whatever the means therapy or journaling or communicating togther in utilizing all of your God given talents and letting go of the "yuck" best you can embracing each other individual gals living well as you seem to be now continuing Peace Blessing Maria and Mosaic Gang

Thank you! I am looking forward to watching your show on the website.
As a fellow traveller, diagnosed with DID last year when my very busy life came crashing down and I could no longer keep my "lost time" spaces out of my professional life, this past year has been a strange journey of discovery. I am fortunate to have a very supportive (although frequently bewildered) husband and partner of going on 20 years, and humor has always fostered good communication between us - he and what I/we now consider our essential, growing self. (Other parts of me have never communicated with him, but have caused some real pain & havoc.) Some of the best healing moments come in sharing the exaggerated, zany stories of our own struggles - and the crazy effect they have had on our lives - or would perhaps on others if he said what he really thought or do have when I/we realize we really did say something that explained some later fallout. (My husband, a civically engaged and popular local professional and wonderful, committed Dad, is a recovering alcoholic, sober for 6 years now after a 2nd dui and 3 yrs w/o driving); our sons are now 8 & 6, and amazing, healthy kids, despite their parents, it seems :-).
From my own experience, I believe the humor possible in hyperbolic recount of personal struggles carries great healing potential, as it allows others to look, see and perhaps share a little of the pain that the story's truth caused- and in that way, help lift our (any one who can relate) burden of aloneness along with educating those who cannot.
It seems one of the real difficulties with DID has to do with its association to dramatic and inescapable childhood trauma and abuse that has been left behind/blocked out whatever, by an outwardly successful person so long, that when it finally comes up, it is like hitting an iceberg. Boom! While it is a recognized and increasingly well understood medical diagnosis of "disease", my conception of it is really as an elegant coping system gone awry. Our goal in ongoing therapy is essentially allowing all my fragmented parts or selves holding all that yuck, but also holding many gifts and talents (being able to show a selected face and have people see only what they want to see, being able to speak happily in front/to crowds, being able to learn meditative practices easily (we already know how to get out of our bodies!)), to keep those good things, and to grow up, catch up, into one functional me. I am really looking forward to sharing some laughs as we watch you on your own journey. I am thinking of making my husband watch with us.
Thank you again for being so brave to share a very personal and difficult story of health and recovery. Good luck in all you do, and may you walk always in love and light.
Regards, Sera

Thank you Maria. We really appreciate your courage in coming out like that. It takes a lot to come out to people and we think you did well at it. It doesn't have to be all convulsions and calling attention to switches *We've never had big, overt, theatrical switches* and we're glad you mentioned that, along with the fact that you can work and raise children and pursue educational goals while still being a multiple. Just wanted to post and say "Good on you!"