Is There a Difference Between an Anxiety and a Panic Attack?

I could just say yes but that would make this very short. If this seems a bit 101 it may be but I was asked and I thought it worth the post.

Panic attacks are well-defined things. It isn't a notional concept. The terms anxiety attack and panic attack are not synonymous. For all that they’re commonly conflated (I'm guilty), they are distinct; In nature, process, treatment, and consequence.

An anxiety attack is a generalized thing. The term covers its bases, whereas panic attacks have specific DSM-IV criteria. What you experience either meets those criteria or it doesn't -and in that case it's more likely an anxiety attack or something in the nature of a broader issue.

All of the above isn't to say one or the other is more serious. It's all shrink-talk really but it helps to have the knowledge, floating around somewhere. Helps when you're communicating with doctors, or when Googling for the mountain of research it takes to keep from having a panic attack about the fact that you have an anxiety disorder to treat. (Tongue firmly in cheek.)

People who have panic attacks, uncomplicated by other mental health issues, tend to be prescribed straight-up CBT; Do not pass Go, do not shell out $200 dollars for meds, get thee to a cognitive behavioral therapist. Anxiety attacks are a little dirtier. CBT will probably be a first line treatment but there tend to be more cards to lay on the table. Neither scenario is as simple as the above flowcharting makes it sound.

From talking to people and from my own experience, these things aren't cut and dried. People tend to experience a bit of both, depending on when you ask. I do know for scientific fact that more people than not will experience a panic attack at some point in their lifetime. It may be 'out of the blue', or in the context of traumatic life events/crises. Hence the CBT. 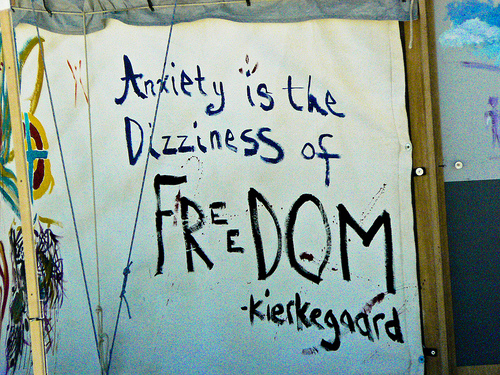 There's a skill-set for anxiety treatment that is almost as well-defined as the criteria for a panic attack. But again that's the uncomplicated version. The one where Mr X shows up, things aren't going well at home, maybe he's recently unemployed, and the way that shows up is in panic attacks. Not uncommon. Not easy, but not something he'll have to contend with over the long-term provided he can learn some ways to cope and express what's going on.

Most of what I talk about on this blog is the complicated version.

APA Reference
White, K. (2011, October 2). Is There a Difference Between an Anxiety and a Panic Attack?, HealthyPlace. Retrieved on 2023, February 6 from https://www.healthyplace.com/blogs/treatinganxiety/2011/10/is-there-a-difference-between-an-anxiety-and-a-panic-attack

What Your Body Knows About Your Anxiety Is Important
Dealing with Feeling Out of Control
Dr Musli Ferati
November, 28 2011 at 6:15 am

By criteria of DSM-lV R and ICD-X panic attack is a subgroup of anxiety disorder that are characterized with terrifying fear associated with vegetative symptomatology of sympathetic circle. On the other side there isn't any psychiatric entity that is nominated as anxious attack, although many clinical cases are displayed with anxious phenomenology. In a word, the distinction is of formal and scientific nature that is important for research questions. In clinical practice two above-mention attacks have similar phenomenology and consequently identical therapeutic approaching. Moreover, when it is well-known fact that in psychiatry as well as in whole clinical workout the main principle is individual treatment of patient. If we didn't refrain this efficient medical practice, we risque to cured our patient as chess-man. Indeed, patient are very sensitive and subtle beings that need and deserve pertain professional and emotional help, simultaneously.

Hi, Kate:
I have experienced both over the years. The symptoms can mimic each other: I suffer shortness of breath with anxiety and with a panic attack but I find that anxiety, in my life, is something that lingers on a day to day basis. Panic attacks feel out of my control. Frightening.
Great post,
Natalie

Hey Elizabeth,
'This stuff can be so challenging to stay on top of.' Too right.
I think we'd all agree with that!