Mental Illness and Other People’s Standards

On acceptance, anxiety and guilt

That's the thing about invisible illness: Once revealed, people around you may feel conned, manipulated, lied to. Even though you've done nothing wrong.

Yeah, I'm guilty of being unwell in the general vicinity, of having mental health issues and having a life anyway. Sorry about that. Next time I'll wear my "mentally interesting" t-shirt so you can detect the crazy, before it gets in your Coke.
*passes the tin-foil hat*

Candy-colored unicorns aside, a brief flirtation with reality tells me that mental health stigma gets all up in there; One of the painful necessities of recovery is confronting, and accepting, that.

Mental illness means working harder to achieve the same stuff as other people. Even harder to have it valued in the same way, and then some more to hold onto that in a meaningful sense.

But it's all down to positive thinking, obviously.

The anxiety of passing for normal (whatever that is)

A lot of people with mental illness can pass for 'normal'. This makes having periods in which one is unable to cope with relatively simple things difficult to comprehend (by Other People's Standards).

Of course it couldn't just be that complex neuropsychological disorders exist across a spectrum of vulnerabilities and causation which make it tricky to predict the outcome on any given day? Nah, best assume this mental illness gig is one big plot dreamt up by psychiatry, or even better, something I invented for my own amusement. 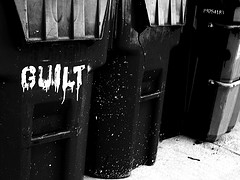 Meanwhile, by the power of acceptance, compassion, and not using other people's standards, I shall go about having either a good or bad day. Exactly as I always do. Which is exactly as it should be, and how dare anybody suggest otherwise.

If folks don't like the fact that they can't see my mental illness because -wait for it- it's happening to me, I find it hard to care anymore; Too busy trying to piece life together between panic and fatigue to give a carp about Other People's Stuff.

I truly don't believe having a mental illness that sometimes gets in the way of my appearing as normal as Other People think they do, and I could, is a costly imposition on other people's...

Other people call them character flaws, therapists call them symptoms of anxiety, and I call them life:

So my hands shake, I can't always think straight, sometimes I'm late because I spent the morning wishing the nightmares and anxiety away. That's probably frustrating, for you. Living a life wherein I'm judged by Other People's Standards™ is pretty frustrating for me, too. Probably because I find being patronized frustrating, no matter if it's usually headed "concern for my health."
I don't care how many good intentions that road is paved with, ascribing moral judgment to the fact of mental illness pisses me off -because it can and has and will keep far too many people from getting help.

Worse, it will keep them humiliated, in pain, isolated, and willing to tolerate the use of Other People's Standards™ against them: in a court of law, in the workplace, in their own homes, every single day.

"I don’t care how many good intentions that road is paved with, ascribing moral judgment to the fact of mental illness pisses me off -because it can and has and will keep far too many people from getting help." Not just because it keeps people from getting help. Also because "different" is not worse. Because one does not have to be common in order to be accepted. Because there is no shame in anxiety or mental illness as there is no shame about having broken a leg or having a lung condition.

I love this article. I read it yesterday and again this morning. It is so right on. It just brings tears to my eyes because it is so true and it is so comforting to read because you really get it and you express it so well.
I have also read several other articles in your archives. You write beautifully and you really describe what's it's like.
I am going to quote you in my blog post today because when I read this yesterday (from this post), "Mental illness means working harder to achieve the same stuff as other people. Even harder to have it valued in the same way, and then some more to hold onto that in a meaningful sense"-- it really really spoke to me. That is EXACTLY how I feel lately.
I'll be back!
Lady Delphinium

The thing is...I keep forgetting to wear my t-shirt that says "Beware Im mentally ill" But i dont tell people because it freaks them out i think. I go about my day just trying to fit in. Thanks for the article.
Ken

Hi Molly,
Glad you could get something out of the article. It is genuinely difficult, getting over that anger. Finding ways to get on anyway, and not let people who just don't get it (for whatever reasons) pull you down too far along with it.
Yeah, definitely we do just have to do what we can, as we can, as positively as possible.
Thanks for commenting
Kate

Really appreciated his article, as most of the time, I go around feeling I'm the only one in the world having to deal with this. I used to get enraged when it seemed like life was just one big pecking order everywhere I went, with me at the bottom.
But then I finally learned that I obviously can't control other's reactions to me, and just feel the feelings for a moment and then move on. Like many mentally ill people, I hang out by myself quite a bit, but I still have a life. The biggest disappointment was volunteering at a mental health center, and finding a friend who had been a special ed. teacher
She thought I was manipulative by saying I had adult ADD, because she thought ADD was usually a hoax. But she dumped me after she saw me exhibiting some of the symptoms. So you can't win by telling other people or by just acting "weird" by their standards. So I think sometimes we just have to "get over it" and try to build our lives as positively as we can.
Molly