Living with the Cycle of Anxious-Avoidance, Trying to Get Out (Part I)

People who experience anxiety often get stuck in the cycle of avoidance, leaving them feeling trapped, like they can't do anything about their anxiety. For want of better options, they hide - from it, and in many cases, from the world.

Having an anxiety disorder is like having a hateful, hyperactive internal alarm system; It only detects the judge, not the jury. The verdict is practically irrelevant: you already know it's guilty. Like predictive text for panic disorders.

That alarm doesn't care about the guy flirting with you, or the reassuring smile the waitress gives.

At first you can just get some air, take a drive. But it gets harder with time, or morphs into social anxiety after prolonged interaction because meanwhile that alarm is getting even better at its job, and it's beeping so loud I can't take anything else in. Eventually, the sensible option can seem like tactical withdrawal. 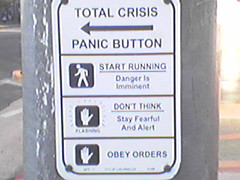 Social phobia: First, you fade away

You disappear: mostly from within, then from the conversation, and gradually, the rest of your life. Because wherever I needed to go, whatever I needed to do to make the alarm shut up already felt so much better than everything else.

Keeping that alarm quiet takes a lot of work for people living with anxiety. A lot of the time it'll mean the only times that feel even close to OK are when nobody else is around. Bar maybe a few exceptions that prove the rule.

When anxiety reaches the point of isolation and avoidance, relationships lack the meaning they once had; They're a hesitant guess in the direction of 'maybe this little corner of the world is alright'.

It's very easy to trust my internal radar because it always feels right. In people with post traumatic stress disorder it's called hypervigilance.

Nobody is ever going to like anybody or anything absolutely, totally, 100%. I don't even have to like someone I love, not all of the time but I can still love them. And I do still want to be around them. It's worth mentioning to friends, family and carers: They may not know.

Fear and Panic: My radar's wrong

Sometimes I'm anxious for what amounts to a 'good enough' reason but regardless of that, my anxiety, it's still like this warning system going off that just builds up to an all-systems high alert, and stays there. No matter what.
(That's how it feels when you don't have many ways to divert, or relieve it.)

Anxiety is supposed to alert us to danger but for people with anxiety disorders the alert system is so amazingly way off base it isn't even funny; Sending out disaster signals at the slightest hint something's a bit off in my surroundings.

I've found it almost always starts off with little things. Tiny, really, but somehow they're magnified by the baseline alert that underlines an anxiety disorder. Treating my anxiety has been very much about becoming better at handling the pitch of the alarm.

Tweet Kate White, or there’s that Book of Face thing, too.

APA Reference
White, K. (2011, February 21). Living with the Cycle of Anxious-Avoidance, Trying to Get Out (Part I), HealthyPlace. Retrieved on 2022, May 24 from https://www.healthyplace.com/blogs/treatinganxiety/2011/02/living-with-the-cycle-of-anxious-avoidance-trying-to-get-out-part-i