A Parent with PTSD Can Affect the Whole Family 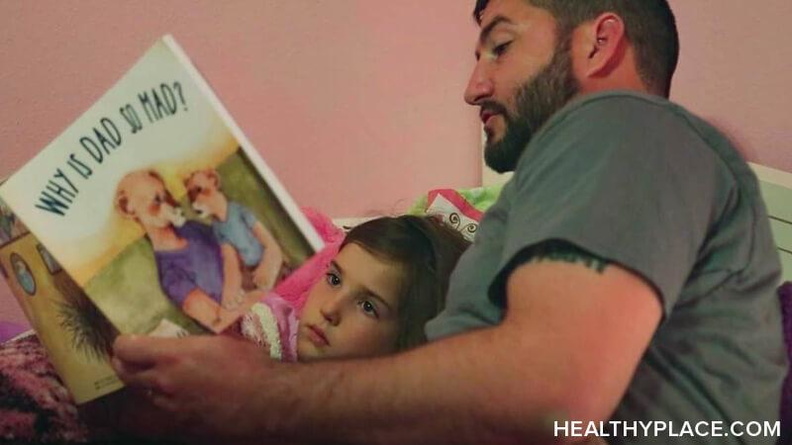 Posttraumatic stress disorder (PTSD) doesn't only affect the trauma survivor, it affects the whole family--including the children (Can Combat PTSD Get Transmitted to Children From Their Parents?). As a parent with PTSD, I think that it's easy to get caught up in what having it feels like for me, and it's easy to forget that it's also affecting those around me, including my husband and my stepson. My husband also has PTSD, so it's fairly easy for him to deal with my PTSD symptoms because he has them too. But before I started this post, I really stopped and thought about how it is for my stepson and other children who have parents with PTSD.

How Do a Parent's PTSD Symptoms Affect a Child?

I am fortunate that I have many of my PTSD symptoms under control with treatment. I no longer have flashbacks, only occasionally have nightmares, and I really only get triggered once in a while. However, I do still struggle with anxiety and depression--not every day, but frequently.

My stepson, who is 12 years old, has seen me on days when I have been triggered, anxious, or depressed. He definitely knows that I have an exaggerated startle response and that he shouldn't hide behind any doors and try to scare me. I'm sure that at times he's been bothered by the symptoms that I still have, but I try to be open and honest with him, and he handles it pretty well.

How Children Can React to a Parent's PTSD

I do pay attention to how he's doing, though, because I know that kids can have negative reactions and behaviors when a parent suffers from PTSD. Seeing a parent experience PTSD symptoms can be scary and can easily frighten young children. According to the U.S. Department of Veteran's Affairs, National Center for PTSD, children who have a parent with PTSD may respond in the following ways:

What Should Parents with PTSD Do to Help Their Child?

If you have PTSD and you have children, there are some things that you can do to help your children deal with it in a healthy way. That way they are less likely to have negative emotional or behavioral issues due to your PTSD.

Having a Parent with PTSD Can Be a Positive Thing

Tags: children and parents with ptsd

APA Reference
DeLoe, J. (2016, November 3). A Parent with PTSD Can Affect the Whole Family, HealthyPlace. Retrieved on 2022, August 18 from https://www.healthyplace.com/blogs/traumaptsdblog/2016/11/when-a-childs-parent-has-ptsd

Watching parents who both have untreated hidden ptsd try to do thier best but poor accommodation leading to moving house six times in 10 years. Finally getting worse as now childrens school has been changed and both parents give up work in search of totally new area they believed would bring better housing and job prospects. This has all gone pear shaped. Now homeless and jobless but will hide this same as hidden PTSD What next? Slipped through net in life with secretly not coping with thier depressions fear of admitting will lead to loss of children.

My wife had a 2 year old girl and was a victim of domestic abuse from the father to the point she had to hide forthe safety of their lives. To make matters worse around the same time she and her child got hit head on by a drunk driver. Both my wife and step daughter lived, but my wife had to have her entire leg rebuilt out of steel and was told she never walk again, which thankfully she learned to do. Years later she had another child, from another man, and he is now my stepson. But I began noticing certain issues like control issues and overparenting that seemed to me to have a negative effect on there, and our relationship. My question is, I know that trauma changes the brain, can that change in the brain affect the new child in anyway in utero? It would seem if the brain was damaged by trauma that it would communicate differently with the fetus. Wonder if there is any scientific clarification on this at all? Also wondering if the control issues and overparenting issues are symptoms of her traumas?

Dr. Aimie Apigian- yeah, that would be bloody wonderful if parents could get help and healing BEFORE becoming parents. Now what about parents like me who don’t develop PTSD until years later- after all of their children have been born. I was in therapy for years, even before my oldest living child was born, and have been fighting PTSD for more than four years, taking meds, going to therapy regularly, and it’s still a constant struggle.
So now my children pay the price because I didn’t get help and “healing” for something that didn’t exist until after they were born. I just got help for my traumas, never knowing they would become PTSD.
I feel guilty enough every day without comments like yours.

I can deeply relate to this because my kids were 10 and 15 when I finally started to face my abuse and my PTSD symptoms became out of control. I agree it is tough realizing how our mental health issues may have affected our kids and began seeing in my own life how my kids were paying the price. I have learned though that we can help them heal from our mistakes. My parents never owned any of what happened to me. They have never apologized for not protecting me or even been willing to have a conversation about it. Once I began to understand the impact of the trauma on me and the way I treated my kids, I began talking with them about it. I apologized to them and worked hard to change my behavior. That showed them how much they mattered to me and just recently my daughter, who is now 20, thanked me for working so hard at making things better. Open communication and willingness to be vulnerable with our kids is so important. Apologies without action are meaningless, but when we apologize and show them we are trying the be the best parent possible through changing our behavior towards them, healing can happen.

There is growing evidence that the incidence of psychological abuse caused PTSD in children is widely underestimated and exceeds that of physical and sexual abuse. Because this type of abuse is far more difficult to pinpoint and tends to be more systematic it has until recently fallen under the radar of mental health professionals. This childhood abuse and subsequent PTSD post effects carry into adulthood and often the lifetime if left undiagnosed and subsequently untreated.

Thank you for sharing this. I have ptsd from a doctor that didn't listen to me about I felt my c-section in 2012. And it has taken a toll on my kids and I. My oldest is understanding more when I just need some space. I'm hoping to keep it up on sharing how we feel.

I appreciate your perspective on PTSD and parenting! I would love if parents could get help and healing for PTSD prior to becoming parents, because I have seen some parents be unable to emotionally connect enough with their children leading to insecure attachments in their child. As you say, though, having had PTSD can have a silver lining, and children can definitely be benefited from parents who do more of the emotional connection and processing with their children since they understand the value and importance of it. Thank you so much for your share!