Mental Health Stigma: An Interview with Patrick Kennedy (Part One)

In this two-part series, I speak with former Congressman Patrick Kennedy, D-RI, about mental health stigma and the work he and others are doing, not only to combat stigma, but to bring research into brain disorders and illnesses to the forefront. Kennedy is a co-founder of One Mind for Research, a group dedicated to brain disorder research. In this interview, Kennedy speaks about mental health stigma; the role his uncle, President John F. Kennedy played in bringing about treatment to local communities, and the role of post-tramatic stress in the "astronomical" suicide rate of today's veterans. 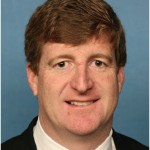 I was looking at some things online and I noticed that you were co-founder of One Mind for Research. What was the impetus behind co-finding the organization?

Well, fifty years ago when my uncle was inaugurated as president, that period of history is known as the new frontier. Many people describe brain research as the last medical frontier.

So we inaugurated this One Mind for Research on May 25th, two years ago. President Kennedy spoke about the mission to outer space, to put a man on the moon, as he said, and return him safely, before the decade was out. And back in '61, people thought the notion of being able to assemble the scientific and technological expertise to do that was really far-fetched.

But to do that was an aspirational goal.

The common goal is, obviously, to understand how this organ of our brain works. And, when you think about it, you're studying any one of these particular "neurological disorders," you're really studying the brain. It's what we have in common, but because we are so focused on the disease and symptoms, we often do not see the underlying mechanisms that often underlies so many similar illnesses, that if those illnesses had better sharing in and amongst themselves, there would be such a great advancement in terms of the common understanding of how to better treat those illnesses.

So really, that was the impetus. To use the metaphor of outer space and "systems analysis," which is what NASA does; to really apply that metaphor to this job of discovering inner space, the galaxy of neurons, and that is what we need to do.

I think bringing that together is the mission of One Mind, and frankly we are in the midst of a major exciting endeavor through the National Institute of Neurological Disorders, funded by the NFL (National Football League), to study traumatic brain injury.

But what we are doing is adding a lot of analytics to the clinical trial on Track Two TBI (Traumatic Brain Injury) and those analytics will allow us to better understand all the co-occurring disorders that exist with traumatic brain injury...and get a much bigger picture, a better picture of how to treat people, individuals, for not only traumatic brain injury, but the multitude of symptoms they may suffer from.

And that's the impetus, because ultimately at the end of the day you're not treating just a Parkinson's patient, or an Alzheimer’s patient, or a mood disorder patient; the person has all of those symptoms. They have some Parkinson's symptoms, some Alzheimer’s symptoms, and some mood disorder symptoms. We need to treat the whole person, and we can't silo the research because we can't silo these individuals' symptoms, either.

The National Institutes for Neurological Disorders, NINDS (Dr.) Story Landis is the head of it, and she is doing this research thanks to a grant from the National Football League. It's to carry on the initial research that was done, funded by the American ARA, the American Recovery Act, and really it's an effort to understand how to treat both traumatic brain injury, but also trauma, post-traumatic stress that comes with it oftentimes.

And I might add we have been supported in this effort by the Wounded Warrior (Project.) That's very, very important to mention, because clearly the suicide rate of our veterans is astronomical: 18 veterans take their lives every day. In the military, active military, more people die at their own hands than are killed in combat. We need to do a better job as a nation to better diagnose and treat brain-related injuries.

I am very hopeful that this kind of research will enlighten not only better treatment for our veterans, but for civilians as well. Because as you know, now most of our veterans are civilian soldiers, meaning when they come home, they go back to their old lives, but now they have these "invisible" wounds of war, and yet there's nothing invisible about your brain sustaining a traumatic brain injury or sustaining trauma, because the neuro-physiology of your brain physically is altered because of trauma, and yet we still saddle these veterans with a stigma that somehow their injury is less real than the outward injuries we all see.

And that is an insult, and frankly I'm outraged that we don't have a Purple Heart for the signature wound of the war. It really is an outrage that we do not treat these injuries as the real injuries they are. Every neuroscientist will tell you how real and physical these are, and yet we still dismiss these injuries as "invisible." I think that's a total injustice to the sacrifice of our American heroes.

Part Two of my interview with Patrick Kennedy.

Thank you Angela for writing such an excellent article about the stigma of suicide and traumatic brain injuries. Your article inspired me so much that this is the FIRST time I've felt brave enough to write down words concerning these two issues that many people don't want to talk about because they either don't understand it or know what to say so they pretend it doesn't exist. This leaves the survivor in a lonely desert of existence. I'm a survivor of both problems and I understand how difficult it is to live with the stigma and invisible injuries you write about. Your interview and comments really got to the core of what survivors live with. I appreciated your insight and think your words are profound and easy to understand both for survivors and loved ones whose lives have been affected also. I appreciate Congressman Patrick Kennedy's comments and enthusiasm for a program that is long overdue for ALL types of people left behind by their loved ones to suicide. As well, ALL types of people trying to figure out how to live a new and productive life that is 180 degrees different from the one they knew before their family tragedy or TBI. I'm glad you pointed out the co-morbidity issue too because it adds another complicated layer of health issues to deal with. I'm thankful to know that there are new and upcoming programs available to people who seek help on these issues.

I wrote an email to this foundation well over a month ago and never received an answer. I am not impressed due to this.