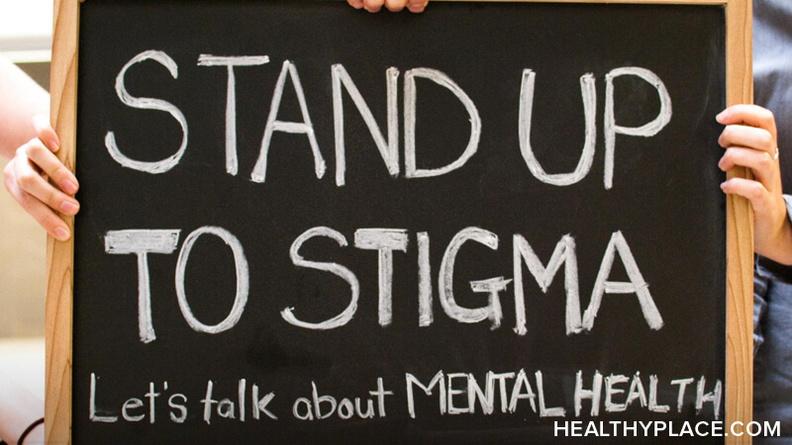 Have you thought about the words use that keep mental health stigma alive and well? I recently got into a rather heated debate with a mental health writer about her choice of words. Specifically, I felt uneasy by her use of the phrase "these people." I'm not sure why this phrase triggered feelings of separateness in me; in the scheme of things, it is not the most offense phrase in the English lexicon.

Then it clicked. Historically, words have been used to separate and disfranchise people with mental illnesses. Words have power, and the use of words carelessly promotes stigma and the viewpoint that "these people" are scary, dangerous, and to be avoided.

Three Generations of "These People"

Supreme Court Justice Oliver Wendell Holmes wrote these words to justify the forced sterilization of Carrie Buck, a Virginia woman who was at the center of the Supreme Court case, Buck v. Bell.

Buck was raped at the age of 17, institutionalized for "sexual promiscuity" and subsequently sterilized against her will. Her background was one of poverty and "feeble-mindedness," and thousands of other men and women like her were forcibly sterilized during the early decades of the 1900s.

In 1927, when Holmes wrote the Court's majority opinion, the term "imbecile" was not a degrading term.

It was a diagnosis.

The Evolving World of Psychiatric Words

From Idiots to Developmental Disabilities

That person is a moron. This woman is an idiot. That family has created a generation of imbeciles.

Not so long ago, these terms were used to diagnosis people.

In the late 1980s and early 1990s, I worked as a mental health case manager/social worker for people who lived in community group homes. Group homes for people with developmental disabilities and mental illnesses were considered cutting edge at the time, as the institutions were emptied and community integration was encouraged.

Documentation took up a lot of my time; daily notes, monthly reports, and yearly summaries and assessments were just some of the paperwork that I had to complete to meet state and federal regulations. In this vast array of papers were diagnoses that I wrote, including mental retardation.

If I had been a social worker in 1920s America, I would have written about my caseload of idiots and imbeciles. My notes would have been filled with references to morons and the insane.

And since I struggle with mental illness, I also would have been referred to as "insane."

At some point, the string of letters that makes up the words idiots, morons, and the like stopped being cold clinical diagnoses and became insults to be hurled at people, words that began to hurt.

I don't know when these and other terms became hurtful; the point is that they are hurtful, and no clinician today would diagnosis someone as a moron or imbecile.

The Myth That Words Can't Hurt

This saying has always irritated me: "Sticks and stones may break my bones, but words will never hurt me." Really? Do you really mean that?

As a writer and English scholar, I know that words have power. As someone who has struggled with mental illness, I know words can hurt.

I want to be thought of as a human being. Not a label.

It has been almost one hundred years since Holmes labeled Carrie Buck an "imbecile." Since then, our understanding of mental health and stigma has grown. Society has evolved, and hopefully, realizes that words can have stigma and that choosing one's words careful can go a long way toward creating a society that is kind and accepting.

@Joyce. I have never heard of Borderline as something that develops from bullying.
@Sandra. I think a lot of people with bipolar have good relationships as long as all parties concerned have a good understanding of the disorder.

I am so glad to hear that someone is pointing out how powerful words can be. I am not a writer, but have a great respect for them.
If I didn't, then maybe it wouldn't have such an effect on me. Thanks.

I am told I have Bipolar Disorder despite having good and sound relationships. I truly experience PTSD and receive SSD despite going to college and working 20 years in Accounting. I am the daughter of a paranoid schizophrenic. My mother AND father sexually abused me.My own 2 children have had a good life despite my horrid upbringing. I truly admit with what I have to live with everyday there are MANY times I WISH my parents had been sterilized. That's the absolute truth. It's hard to explain that parenthood shouldn't be a given. I feel if you're not ABLE to raise a child just having sex and bearing a child doesn't make your child able to be raised by a right-minded. If you knew the HELL of waking up in the middle of the night with a knife over you you would understand where "survival of the fittest" comes into play.

My son has high-functioning autism (PDD) and the county community services board sent a counselor to talk with us 4 times over some months. At the last meeting, she casually mentioned that should be become his legal guardians, we would be able to decide that he not have the right to marry and/or ensure he have no children. I truly thought I'd heard her wrong, but she said well, many families ask about this and it can easily be done.
I'm still reeling from that offhand comment. It's something you never forget. I was also cursorily told I should never have children when I was 20 and hospitalized for mental illness. This is about the worst thing you can say to another human being.

I have Borderline Personality Disorder, caused by bullying. WORDS DO HURT! I am not ashamed of my diagnosis. It is just a part of who I am. I have blogged about it here:
http://makebpdstigmafree.wordpress.com/2013/06/19/i-have-borderline-personality-disorder-…