I thought I was done with writing about eating disorders.

I developed and started writing HealthyPlace's Surviving ED blog in 2010. Readers saw me through several relapses, struggles and many tears, and the everyday ups and downs of recovering from an eating disorder.

In December 2012, I wrote a highly optimistic good-bye post, declaring that I had found my dream job and wishing everyone well. I was done, done with anorexia and writing about it. I was moving on, to a bright and endless future.

First I found out the job wasn't such a dream after all.

Today I found out I am overweight and need to lose some pounds, putting me on par with the majority of Americans.

I can't believe it. 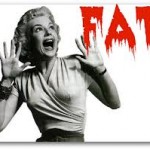 The Best Laid Plans of Mice and Men

I hadn't originally planned to write about weight stigma — again — for today's post. This past week, I have been thinking about and exploring the roots of stigma (and I do plan to write about that subject.)

Then I went to the doctor today, and stepped on the dreaded scale. And watched as the sliding bar was slid further. And further. And then further...

Let's just say it didn't stop at the number I desired. At all.

I have to be honest, my first thought was that I hate to be overweight. Hate it.

At this point, many readers might be wondering what weight stigma has to do with mental health stigma. One reason I am writing about this subject is that I hope it will open discussion about how weight stigma ties into how depression is inherent in many who struggle with obesity.

It's not as simple as you are obese, therefore ipso facto, you are depressed. It also is not clear if someone is depressed because he or she is overweight or obese, or if the weight somehow causes the depression.

What I do know, instinctively, is that any stigma can be soul-crushing, that all stigma points to a society that doesn't allow people to be different — and free.

I don't like the idea of being overweight, and not just because I feel it's not healthy.

No matter how I try to sugarcoat it, no matter how much I try to dance around it, I know that I hold some of the views society does about weight and beauty and worth. I don't like that I feel this way, but denying it is not being honest and open, and it doesn't open the door for dialogue about stigma and weight.

Let's face it — many people, consciously or not — stigmatize those who are overweight and obese.

One of my hopes for writing this blog is to expose stigma in every form, for shedding the light is the first step toward eliminating and freeing ourselves from the bonds of stigma.