Hyperactive and Stigmatized: The Effects of ADHD

"I feel like I have AIDS man! Everybody's scared of me!"

I recently heard these powerful words from a client who struggles with adult Attention Deficit Hyperactivity Disorder (ADHD).

I hadn't really given much thought to the stigma associated with ADHD until I met this client, who has a particularly tough condition. His mental health issues prevent him from being able to sit without fidgeting and moving his arms and legs. he always has to have something in his hands and he has difficultly controlling the tempo and content of his speech. He also struggles with pressure of speech and feels the overwhelming desire to say everything that is on his mind. 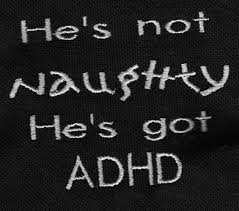 And obviously, that can cause a great deal of problems when it comes to romantic relationships, work, school and a social life. But what I've noticed with this client is that the general public doesn't treat him as though he suffers from a mental health condition. They treat him as though he has a contagious condition and that simply being in the same room as him could cause them great personal harm. When he told me it feels like he has AIDS, I couldn't help but agree with him.

So what can a person do when their mental health challenges essentially cause them to be 'annoying?' At what point do people stop giving you the benefit of the doubt and just label you as 'crazy' without giving you the chance to explain your point of view?

I have tremendous sympathy for those with ADHD. I have never suffered myself but I get to see on a daily basis just how difficult it can make your life. There are few mental health conditions that are as 'in your face' as a serious case of attention deficit hyperactivity disorder.

Addicted to the Treatment

One of the biggest difficulties in treating adult ADHD with an addicted population is that the drugs used to treat the condition are often what the client is addicted to in the first place. Stimulant medications such as Ritalin, Adderall and Dexedrine are often the first line of treatment for ADHD. But without having the resources for continued monitoring of their medication, they are often brought back right into the cycle of addiction by the very medication designed to help them.

Behavioural modification is an effective therapy for a client with adult ADHD, but with nothing to help slow down their intrusive thoughts, it can be a long process before any noticeable gains are made.

So think twice about the words you use to describe the hyper person in your school or workplace.

Words stick. And worse than that, words hurt.

APA Reference
Curry, C. (2013, May 21). Hyperactive and Stigmatized: The Effects of ADHD, HealthyPlace. Retrieved on 2022, October 5 from https://www.healthyplace.com/blogs/survivingmentalhealthstigma/2013/05/hyperactive-and-stigmatized-the-effects-of-adhd

Q and A with Bipolar Author Juliann Garey (part 2)
A Guide to Overcoming Self-Stigma
pamela alekana
July, 1 2015 at 6:20 am

Thanks a lot for sharing with us this article. we have gotten a lot of information.

i thank for sharing with us about therapy for a client with adult ADHD,we have learned more.

i like you sharing with us. T hanks a lot. i too have shared with friends on line.