Jess Hudgens, my co-author on Surviving ED, wrote a powerful post last week where she compares, among other things, how feelings are similar to waves in that they won’t last forever. In discussing urges and coping skills experienced in eating disorder recovery, Jess highlights that feelings are what lies beneath urges when they surface.

Jess’s post immediately brought memories of a therapy session I once had, where I explored a "reframing" exercise for the first time. It was that instance where my therapist helped me reframe the beliefs I held about self-esteem and body image. Up until that point, the best way I could describe my state of mind was that I felt numb. On any given day, I couldn’t quite figure out how I felt. When I tried to articulate a so-called "feeling," I usually ended up with words like light, fat, heavy, small or little. Over time, my therapist helped me chip away at these words to uncover the actual meaning of them in relation to the eating disorder I was suffering from: bulimia.

My therapist subsequently encouraged me to write down how I felt and to describe in detail what I was experiencing. The best way I can explain this exercise is that with every set of feelings I worked with, it was like opening a shoebox and trying to make sense of the stuff I’d find inside of it; trying to understand the meaning behind the "objects" it contained. For example, after a fight with a friend, before this exercise, the best term I could think of was that I felt "empty," which, in turn, often led to self-harm by bingeing and then purging. However, with the therapy and the conversations it created, I could start to figure out what “empty” meant and dig deeper into why that feeling was triggered, to understand what the feeling actually meant.

Eventually, I understood that when I felt “empty,” it really meant I was struggling with not feeling good enough or that I hadn’t measured up in a given situation. This could have been linked to how I looked in a situation, or how I performed in comparison to my life goals.

Empty was therefore not accurate, but rather it was a result of feeling insecure, afraid and disappointed in myself. In turn, that let me go backwards in my life to uncovering what set of patterns would result in these feelings. Of course, what I found out was that the same situations would lead to the same feelings: none of those actually being “empty.” 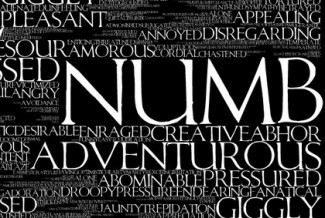 So in parallel to Jess’ point, I can confirm that, in my life, eating disorder recovery meant focusing on those feelings underneath the waves. Hopefully you can as well. If you haven’t tried it yet, I strongly encourage you to try to reframe your beliefs about how you think you feel. This is especially true if you’re struggling with an eating disorder, whether you’re contemplating recovery, or are making progress in it. I talk a lot about doing this with a therapist, but it can be done alone, if you are so inclined. Simply think of what is actually bothering you and let yourself dive into it, allowing whatever comes to mind to surface without judging it. You’ll be surprised at how simple it is, yet how rewarding it makes you, yes, feel (no pun intended). Eating disorders have very little to do with food: once you accept that, you can learn to accept your feelings and focus on getting better, because you deserve recovery.