The Breakthrough After the Break-Up

This week I might see my ex-boyfriend, Grant. Everyone has an ex like Grant, you know, the guy you thought would be The One, who just turned out to be The One That Got Away.

I haven’t seen Grant since we broke up 5 years ago. Actually, it would be more accurate to say that I haven’t seen him since the day before I issued him a relationship ultimatum via email. Appropriately, he never responded. You should know that I’m aware that email is an inappropriate medium for such emotional expression. I’ve grown a lot since then, in all directions. 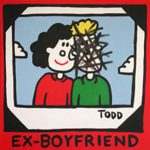 Every woman wants to look her best the first time she sees a former flame. Even if she has no intention of rekindling the romance, there’s nothing wrong with making an ex-boyfriend wish he’d never walked away. I’m no stranger to vanity and in my heart of hearts, I want Grant to look at me and drool. Yet, that’s probably not going to happen, since I was in the best shape of my adult life when I dated Grant. I thought I was smoking hot. Since then I’ve picked up an extra 50 lbs., the ill effects of emotional eating and depressive episodes that kept me in bed for weeks on end. I may not be particularly happy about the weight gain, but I’m probably more comfortable with it than my past – or potential – suitors. Also, I’m even happier about the other things I’ve gained.

Here’s the thing that Grant won’t notice when he looks at me now: an increase in emotional stability that has, fortunately, accompanied the increase in my dress size. I no longer use email for serious conversations, and I’m very aware of my role in both creating and diffusing issues in romantic relationships. Grant would be happy to learn that, since I caused a few useless fights when we were together. I also know when something isn’t my fault, and I’ve become very good at expressing my displeasure with others. Not that I was ever bad at pointing out Grant’s shortcomings; now I’d be more rational, less prone to crying, whining and passive aggression. This doesn’t change the fact that my behind now keeps moving long after I’ve stopped walking.

As I struggle with slight anxiety at anticipating the lack of desire in Grant’s eyes, I try to silence my active inner critic. Yes, I’m a pretty well-adjusted woman with bipolar. Yes, I have many personal and professional accomplishments, made more astonishing in light of my struggles with mental illness. But my petty, emotional mind thinks I’m a fat Old Maid. Whatever. I’m not listening to her anymore. And Grant can kiss my ample posterior.

APA Reference
Lloyd, T. (2011, August 28). The Breakthrough After the Break-Up, HealthyPlace. Retrieved on 2022, August 9 from https://www.healthyplace.com/blogs/relationshipsandmentalillness/2011/08/the-breakthrough-after-the-break-up