When Children Have Suicidal Thoughts 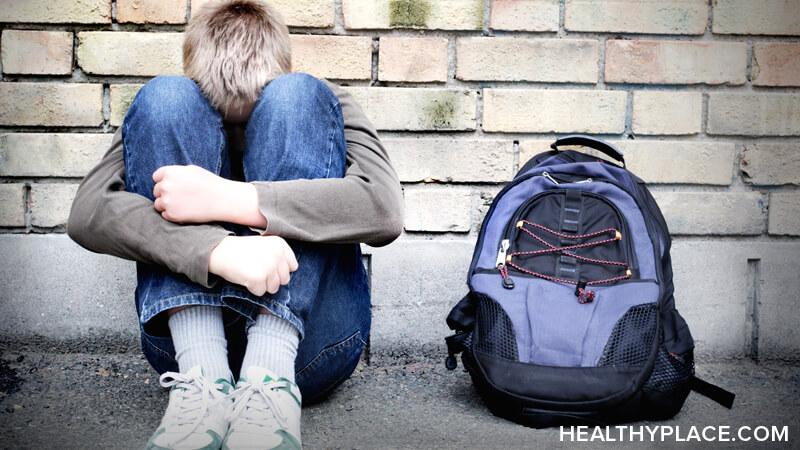 Yes, Children Can Have Suicidal Thoughts

When I say my child had suicidal thoughts at age six, people are shocked. Some don't believe me. As adults, we sometimes assume all children are happy-go-lucky. We assume suicidal thoughts are too complicated for them. We make the assumption that, because a child doesn't know the word "suicidal," they can't feel it.

As a mother of a child who has been suicidal, I'm here to tell you it happens. Children experience trauma, abuse, mental illness, bullying, and countless things that trigger thoughts of suicide. A mental health diagnosis isn't even necessary. In this way, suicidality in children is similar to suicidality in adults.

How to Know Your Child Is Having Suicidal Thoughts

There are many risk factors for child suicide. My son, for instance, has disruptive mood dysregulation disorder (DMDD). This results in intense and destructive angry outbursts that, when untreated, can last hours every day. It can look like bipolar disorder with shifting moods from extreme highs to major lows. My son also has attention-deficit/hyperactivity disorder (ADHD), so he's very impulsive. His behaviors are not only outwardly destructive but self-destructive, so he's at higher risk of suicide, whether on purpose or by accident.

In fact, he was six years old the first time he said he wanted to kill himself. I was shocked that first time. He couldn't mean it, right? Developmentally, he couldn't even know the finality of death. Maybe he was being dramatic or he wanted to shock me. Maybe I was too sensitive because of my social work background.

Because of my background, though, I did ask him more questions. People are often afraid that talking about suicide makes people more likely to do it. This isn't true.2 Even if your child isn't saying the words out loud but he or she seems different, sadder, angrier, or you're just concerned, ask your child outright if he or she are having thoughts of suicide. Ask questions.

At 11, my child has a specific plan on how he would hurt himself that would actually work. I obviously take that seriously. When he was younger, though, he'd shout all sorts of plans at us that seemed almost silly. He'd get on his bunk bed and declare he was going to leap off. He may bruise himself that way, but he probably wasn't going to die.

Just because we can dismiss the plan, though, doesn't mean we can dismiss the thoughts. Children may not be able to hurt themselves now, but if the underlying problems aren't addressed, they may find a way later. If my family hadn't taken it seriously, we may not have been as diligent at monitoring what was safe in our house or cars. We may not have been as prepared when, in an impulsive fit, he made a serious attempt to kill himself at age eight.

What to Do When Your Child Is Suicidal

If your child is suicide, get help. If you feel you can't keep your child safe at home, call 9-1-1. Otherwise, use the resources posted below.

I recently talked about this with my son. He said he'd tell me and his dad if he felt suicidal, and he'd ask us to remove certain dangerous items from the home. (This is called means reduction, and it saves lives.3) He said it helped when he went to the hospital at age eight. He said he couldn't hurt himself there.

Melissa David is a mother based out of Minnesota. She has two young children, one of whom struggles with mental illness.The support and wisdom of other parents proved invaluable to her in raising both her children; and so she hopes to pay it forward to other parents via Life With Bob. You can find her on Facebook and Twitter.
Why Use Antipsychotic Medications in Childhood?
3 Myths About Parenting a Child With Mental Illness