Sibling Abuse as a Result of Childhood Mental Illness 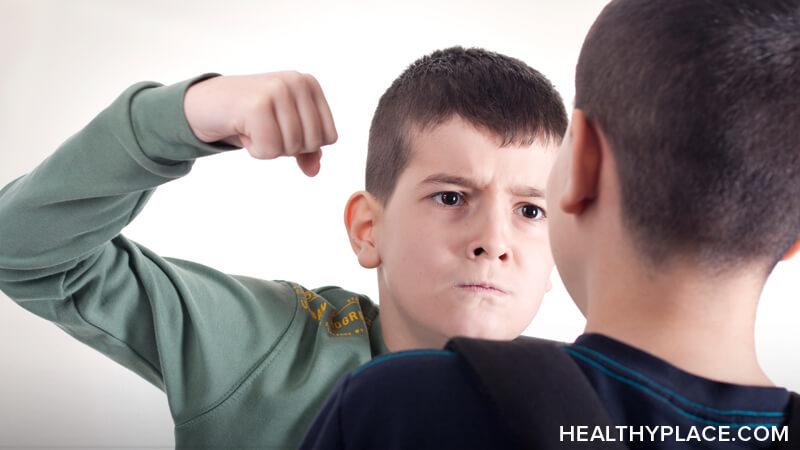 My family experiences sibling abuse because my son has disruptive mood dysregulation disorder (DMDD). This means his emotional responses are violently out of proportion to the trigger. Worse, the trigger is often his sister. If he perceives her to get anything positive that he does not, Armageddon breaks out. I don't know how siblings without mental illness interact. All I know is that the fighting that goes along with sibling abuse is exhausting.

Siblings fight over everything: objects, parents, games. Parents expect it, even if we find it tiresome.

Rivalry becomes sibling abuse when the behavior of one sibling toward another is severe, intentional, and repeated. My son sometimes seeks out my daughter just to intimidate her or disrupt her. My daughter never attempts to hurt him except in self-defense. The majority of the time, she actually craves his attention because she loves him.

It's deeply hurtful to watch and for a parent, it causes chronic anxiety.

The causes of sibling abuse seem to be similar to what causes partner abuse. I read once that children with intermittent explosive disorder (IED), which is similar to DMDD, have a higher likelihood of abusing future intimate partners. This is partly because, like DMDD, once they lose emotional control, they can't come down easily. In the meantime, they destroy property or hurt people. When they've calmed, they feel terrible, but this doesn't heal the abused.

Like adults, in children, there is also a need for power and control. My son's in-home therapist noted that fights with his sister often involved him trying to take power away from her or trying to control her actions. He was especially triggered if he felt she got more attention, less homework, or anything he wanted for himself. He often wants to "even the playing field" without understanding that it's already even or that he's actually got more than she does sometimes.

How to Prevent Sibling Abuse

It's exhausting, but parents prevent it. I feel like I'm constantly in a boxing ring, racing to separate them or step between them to block a thrown object. I've had to physically remove my son to his room so that he can come down from a DMDD outburst in a safe environment. I've had family or friends take my daughter for a few hours so she can be safe elsewhere.

This is yet another reason mental illness is so isolating. My husband and I don't go out much because what babysitter could manage violent outbursts? My son cannot watch his sister alone, clearly. We have to be present to referee interactions.

Which means mental illness is exhausting, too. My children have to live together, so I need to protect my daughter while trying to help my son. They require two different types of parenting, but there's just me, juggling them both in the same boxing ring preventing them from sibling abuse.

How to Get Help for Sibling Abuse

My son's behaviors put him at risk of being harmed or harming others. Recent news stories have made anxiety for my daughter's wellbeing pretty high without worrying about her safety at home, too. I need to manage both their emotional overloads, and I'm nearing my own overload.

My next step for her is therapy, a safe place to discuss her brother and any sibling abuse. We tried it in family therapy, but my son reacted poorly to the talk of his abusive behavior. I hear this happens in therapy for abusive adult relationships, too.

I give my daughter outlets outside of the home: Girl Scouts, piano lessons, and after-school activities. She needs more alone time with both parents, and that's another step to take, though it's more difficult to make happen.

I'm at a loss, so if anybody knows of sibling abuse resources, please leave some in the comments. I'm sure it would help tons of parents.

Melissa David is a mother based out of Minnesota. She has two young children, one of whom struggles with mental illness.The support and wisdom of other parents proved invaluable to her in raising both her children; and so she hopes to pay it forward to other parents via Life With Bob. You can find her on Facebook and Twitter.
Medication Compliance Monitored by an FDA Approved Drug
Finding Gratitude When Mental Illness Takes So Much from You
Sandi
April, 2 2019 at 5:32 pm

While I feel like we are living the same life, I don't feel like your articles offer any sort of help or constructive ideas to help kids with DMDD.

YES! YES! It's exhausting....but we have to keep going. We are living parallel lives...My daughter struggles with DMDD and her little brother feels the effects, but we do our best to keep them both safe and feel loved.

You are to be commended for recognizing your son's abuse of his sister and for trying to protect her from it. I really feel for your daughter as I was also abused by my brother. However, my parents did nothing to stop it and nothing to help me. As an adult I suffer from depression and chronic pain which I feel was triggered by the trauma. I wish my parents were as helpful and knowledgeable as you are. I know that you and your son are also suffering. Best of luck to you all.