Does Your Child Have ADHD? Non-Clinical Clues from a Mom 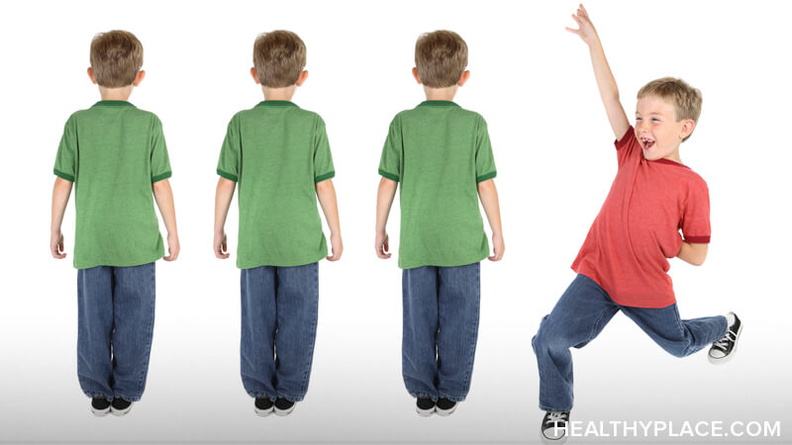 Daily Signs That Your Child Has ADHD

What Does Hyperactivity in a Young Child Look Like?

If your child is hyperactive like mine, you may notice it as soon as age three. Sleep patterns are an early clue. My child never napped. He'd run laps at daycare while other children slept. He rarely made a full eight hours at night, often getting up to peruse the refrigerator, which we keep locked to this day. Currently, he takes medications for his mood disorder that are typically prescribed for sleep, and this still does not make him sleep. As he puts it: "I have too much energy."

If you child has ADHD, you may also notice your child gets extremely frustrated by challenges. This frustration then leads to frequent tantrums. These are not typical tantrums, either. My son sometimes goes into full-bodied, screaming, property-destroying explosions (also a sign of disruptive mood dysregulation disorder, which I'll talk about in a later post). Some tasks may seem simple to you or me, but to our children with ADHD, they require more concentration than those children can muster. Our kids can't always articulate that, so they act out.

How About Hyperactivity in a School-Age Child?

Hyperactivity becomes more of an issue in school. The majority of children with ADHD are diagnosed by first grade. The Washington Post recently noted an uptick in diagnoses. They reported that 11% of school children in the U.S. have ADHD. The theory is it's overdiagnosed because kids need movement and cannot sit still as much as schools demand. My own family members have told me my son is simply bored, understimulated, and poorly parented, and this is why he's hyperactive. All of these are myths (Myth and ADHD Related Behaviors).

Overdiagnosis may be happening, but a clue that your child may actually have ADHD is that they can't sit still anywhere, not just school. My son may not make it through dinner without getting up. Even in the car, hyperactive children are kicking or talking non-stop because those are the parts of themselves they can still move. For me, "hyperactive" meant chasing my son through the supermarket at one point, replacing everything he knocked down along the way, and then dragging him to the car and crying over the steering wheel because he just wouldn't listen. He couldn't stop moving long enough to listen.

Can Daydreamers Have ADHD?

Unlike primarily hyperactive children, the primarily "inattentive" type may go unnoticed longer. Some make it into adulthood without realizing they have it.

Some of these kids are labeled daydreamers, but inattention is not that simple. My child is too hyperactive to sit down and daydream. For him, inattention is staring directly at me while I speak and not hearing a word I say. Inattentive children will interrupt you in the midst of a single sentence multiple times. Your inattentive child may take an hour to get his pants on in the morning. No matter how early I get up, I'm still scrambling to get out the door last minute because we spent our time looking for the same coat, backpack, and shoes that we spend time searching for every morning.

Like hyperactivity, inattention happens in and out of school, and if my son's own words mean anything, it's just as frustrating for children as it is for their parents.

What to Do If You Think Your Child Has ADHD

If you think your child has ADHD, see your pediatrician. Your doctor will walk you through assessments to determine if ADHD is the issue. If it is, do your research on treatments and find support early.

If ADHD symptoms don't quite capture your child's behaviors, a couple things may be happening. Your child may just not have ADHD, or if they do, it's not to a level of concern. It could be, too, that you're noticing signs of other mental health disorders. My child, for instance, has a mood disorder that accounts for some of his behaviors. Once again, if you're worried even a little, talk to your pediatrician. Talk to other parents, too. Feel free to leave comments on this blog and engage in a community of parents who have examples of behaviors on both sides of the "normal" spectrum.

APA Reference
David, M. (2017, April 17). Does Your Child Have ADHD? Non-Clinical Clues from a Mom, HealthyPlace. Retrieved on 2022, October 4 from https://www.healthyplace.com/blogs/parentingchildwithmentalillness/2017/04/does-your-child-have-adhd

Melissa David is a mother based out of Minnesota. She has two young children, one of whom struggles with mental illness.The support and wisdom of other parents proved invaluable to her in raising both her children; and so she hopes to pay it forward to other parents via Life With Bob. You can find her on Facebook and Twitter.
Manage Problem Behaviors Caused by Childhood Mental Illness
How to Advocate for an Individualized Education Plan
Emma
May, 9 2017 at 3:46 pm

Thanks for listing all the points with the resources - going to have look into all that even further :)

It seems like we are seeing more and more children, at ever younger ages being labeled, and prescribed, for ADHD. I think this was a wonderfully insightful and helpful read. "ADHD is more than.." -- such important information, addressing very often misunderstood. Education is so important for properly understanding and working with children and ADHD. Thank you for sharing.