Giving Psychiatric Medication to a Child with Mental Illness

There is a pill container in my kitchen sitting on the windowsill above the sink that contains psychiatric medication that I give to my child with a mental illness. It contains 14 compartments, labeled the days of the week, AM and PM. The compartments have dosages of antidepressants, antipsychotics, mood stabilizers and acne medicine. My son, Bob, takes a handful of these pills every morning before he goes to school and every night before he goes to bed.

Like most parents, I was not eager to give my child with mental illness psychiatric medication. In fact, my son showed signs of depression for six years before I gave him a single pill. During those years, Bob visited a psychologist, counselor, crisis center and therapist. Finally, I took my child to a psychiatrist for treatment. 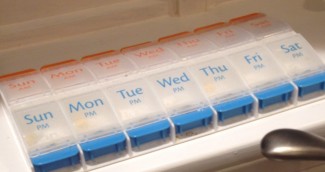 Dr. G, Bob's psychiatrist, mumbled something I couldn't understand, scribbled out a prescription and told us to come back in six weeks. Bob, who was severely depressed, passively swallowed the little pill for weeks. Miraculously, his mood improved. Soon Bob was back to his old self. Unfortunately, his mood continued to escalate into mania.

Dr. G gave Bob a new mental illness diagnosis and prescribed an antipsychotic. I gave Bob the tablet immediately when we arrived home. It made him sleepy and hungry. More importantly, Bob's mania decreased until the drug wore off, usually within 24 hours.

I desperately called Dr. G when Bob began rapid cycling. He was dangerously manic and acutely depressed in the same day. Dr. G prescribed a mood stabilizer and increased the antipsychotic. Over the next several weeks, the doctor continued boosting the two medications Bob was taking and added another. Still, Bob was seriously unstable.

Three months later, we called on Dr. B, who specializes in adolescents. Dr. B removed Bob's second mood stabilizer and adjusted the dosages of the first two medications. He also had Bob trial another medicine to combat his crippling anxiety. Within six months of treatment, Dr. B changed all Bob's medications because of medication side effects. After a long while, Bob became stable.

Bob stopped taking his medication and became unstable. We were back to square one. Dr. B prescribed yet another mood stabilizer to go with the antipsychotic that had worked so well. It took many weeks of slowly increasing the new remedy to see a positive response. Again, Bob was depressed, so the doctor added an antidepressant to the mix. Once more, side effects forced the doctor to replace it, then raise the dosage over time.

Bob has been mostly stable for over two years. We continue to tweak his cocktail because he is a teenager. I learned stability is a moving target in children and teens. I also learned there is no silver bullet when it comes to psychiatric medication for my child with mental illness.

My next blog will explore side effects Bob experienced from psychiatric medications.

Advocating for A Child with Mental Illness
Side Effects of My Child's Psychiatric Medications
Regina
January, 22 2015 at 5:04 pm

My daughter has a similar box and routine.
It is a difficult thing but necessary. She is only
16 and has suffered for going on 5 years. Still
I have hope.

That sounds so hard to do, especially as a parent. You have to do what is best for your own child in the end of the day. Other people are so quick to judge and tell you what you should be doing and I agree with what your doing. I know it's awful giving your child psychiatric meds but you have to do what's best for your child. I have to give my son Ritalin for his ADD and Aspergers and I hate giving it to him because he seems depressed on it and doesn't eat but he can do his school work and consentrate when he takes it. There's no perfect solution it's all trial and error.