3 Tips to Deal With Your Child's Snarky Attitude

Parenting a child with mental illness is challenging enough. Add to that a snarky attitude and it does not bode well for anyone. So what do you do with a stinky, snarky attitude? Unfortunately, you need to deal with it.

For example, Bob's 12 now and has been increasingly responding rudely and disrespectful towards me (which upsets me to no end because I'm his mother & primary caregiver). Beyond the usual suspects for snarky attitude - physical illness, hunger or fatigue, Bob's attitude can be attributed to the onset of puberty. But, some of it is also due to his inattentiveness and impulsivity (symptoms of ADHD-combined). When on medication, Bob's mouth is less rude. Once the Concerta (12-hour release) is out of his system, there comes the 'tude. Bob has a tendency to express more negative attitude as a result. After my own Saturday dose of snark from Bob, I came up with some tips on how not to get frustrated when Bob's mouth runs away with itself.

My first step was to step back.

I gave myself some distance. Not physical distance because we were on the subway, but emotional distance. I began to write. Give yourself distance. Having a child be rude and disrespectful with words or tone of voice is very irritating. It provokes you if you allow it when you're at your wits end. Step back and disconnect for a bit.

My next step was to stop talking.

I learned this many years ago when I used to argue with my mother as a teen. Yep, I was very rude when angry. Hold your peace. Words can hurt so much. While your child uses words to hurt, you don't have to. Doing so would only extend the negative experience and be unproductive. If I felt that I just wanted to yell at Bob, better to be quiet than blow up. After all, Bob is also learning about dealing with anger from me.

My last step was to choose my words wisely.

Bob can definitely push my buttons. That's what happens when someone knows you so well - that person can get to you emotionally. Choose your words carefully. Parenting a child with mental illness is challenging because your child already faces many difficulties that can make him/her very sensitive even to constructive criticism. By choosing your words wisely, you can stop the negative attitude and help your child adopt a positive one. 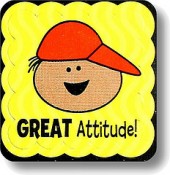 Using these tips, I've been able to keep myself calm while dealing with Bob's snarky attitude. I've not always been successful, but I can say things have gotten better for us. So far. I know that Bob's attitude will rear its ugly head again, probably very soon. I also know that I may not always use my tips, but having them handy helps.

How to Talk About Tragic Events with Your Children
How Aunt Flo Affects My Parenting
Dr Musli Ferati
May, 19 2013 at 8:01 pm

After your genuine and open-minded experience with mentally ill child with Snarky attitude, I can say that it is most quaking emotional toss. Anyway, it ought to deal with this hard psycho-social confrontation, in order to surpass satisfactory numerous misunderstandings in family bosom. On the other hand, the ability to solve stretched relationships with snarky child indicates an useful way to manage child's mental disorder. These and many others enigma that penetrate this turbulent family situation require great emotional and conduct sacrifice. The same rule is value for your three step cascade of inter- personal communication, both verbal and emotional ones with child's snaky attitude. Finally, it should to make effort in order to improve the communication with this kind of child's behave, because the parent's responsibility burden each person. Once more, thank you for this meaningful recommendation.

I found when rearing my three young men that giving them choices I could live with as well as telling them up front what is expected and what the consequences will be if they break the rules worked well.
ie: If you continue to use hurtful words and be disrespectful, you will lose _____. You can have _____ if you do _______ chore. If you want _____ next week, you must do _______. Whenever you are disrespectful it will cost you in _______.

Hi Lisa,
Thanks for the visit. This is a great script. I use some of the same ideas. Consequences (positive and negative) are very good ways to motivate kids to get the behaviors you want. I practice this a lot at work though at home with Bob it can be a challenge. My own feelings are invested, so I can also relate to parents dealing with behavior issues. Thanks for sharing and please come again soon.

"Choose your words wisely" is spot on. I personally have found humor works wonders also. If the adult can get there first it makes all the difference. I raised two strong willed boys with not too much trouble because we all learned to laugh in the middle of a tough situation. We didn't take ourselves too seriously.

Hi there Lessia,
Thanks for stopping by. Humor is a great way to deal with snark. It is also a great way to perk up your own attitude when you feel down or stressed. Thank you for your perspective and please visit again soon.