I was almost looking forward to Thanksgiving this year. We had a pretty uneventful holiday planned--Bob would be at his father's house until Saturday evening, and my large, loud extended family had opted for a smaller gathering on Saturday (just my parents, siblings, and assorted nieces).

Until Bob caught wind of this plan, and asked to come home early so he could go to his grandparents' house with us. And then I discovered it was not to be an intimate gathering (or as "intimate" as it gets with four siblings, their spouses, and 7 grandchildren); it would be the whole family--aunts, uncles, ad nauseum--totalling 28 people. 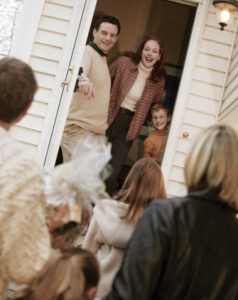 As I noted in a prior post about Bob's birthday gathering, Bob doesn't do so well with large parties. The noise, the commotion, the chaos--all of it takes its toll on him, and his shelf life for such occasions is fairly short.

Explaining that to well-meaning, tradition-loving relatives is akin to explaining the Big Bang Theory to a toddler. They think they get it--but they don't, really. And in the end, everyone is uncomfortable.

It's hard for them to understand that for Bob, being in a room with that many people makes him physically uncomfortable. That he starts to feel almost panicked, which makes him irritable and cranky. Which usually causes him to do or say things that get him in trouble, which makes him even more irritable and cranky. And Bob doesn't quite understand it, himself, so he can neither explain it, nor recognize it in order to diffuse it. 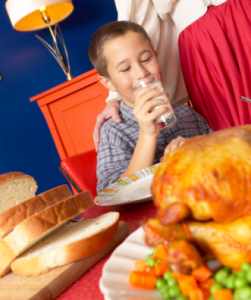 Although, as he gets older, he's getting better at knowing when he needs to break away from the group--retreating to our family room at his birthday party, for example. Of course, it's considerably harder to explain the guest of honor's absence--at least he's not necessarily required to be omnipresent at Thanksgiving dinner.

Although (adding yet another wrench to the cogs) the turkey gathering will likely be at my parents' church, as it's better suited for a crowd than their house. Meaning I will be saddled with keeping tabs on Bob the whole time to make sure he's not getting into things he shouldn't or otherwise getting into trouble.

But this is me, preparing for the worst. I'm also hoping for the best. Bob has been doing remarkably well on his new medication regimen, and I have a few tricks to help him manage through big family events (upon which I will elaborate in upcoming posts). We'll see how it goes, and with any luck, my homemade egg noodles will be the only thing giving me heartburn this Thanksgiving.

APA Reference
McClanahan, A. (2011, November 22). Holiday Gatherings Can Cause Added Stress for Mentally Ill Children and Parents, HealthyPlace. Retrieved on 2022, August 11 from https://www.healthyplace.com/blogs/parentingchildwithmentalillness/2011/11/holiday-gatherings-can-cause-added-stress-for-mentally-ill-children-and-parents