My Child Has a Mental Illness: Stop Saying It's a Phase 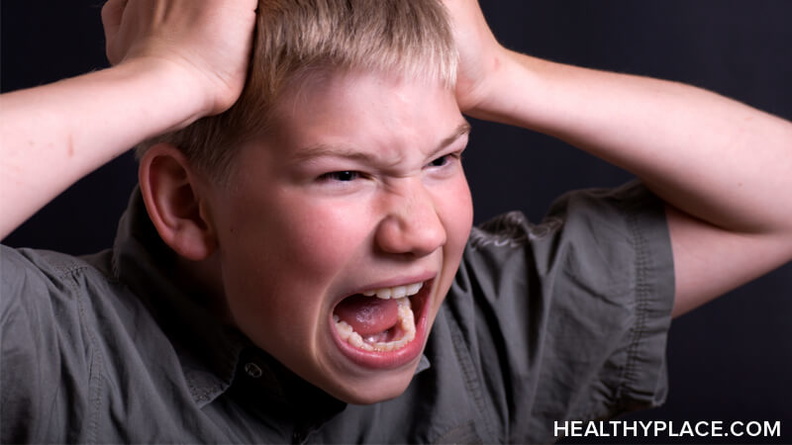 My child has a mental illness. He is not going through a phase!

As a parent of a child with a mental illness, nothing irritates me more than the well-meaning (or not-so-well-meaning) person who insists on telling me, "oh, I'm sure Bob is just fine." Or any variant thereon, such as "it's just a phase", "he'll grow out of it", "they all do stuff like that", etc.

Believe me, I wish you were right. But your comments don't make me feel any better about the situation. If anything, they make me feel worse.

We are already much too familiar with self-doubt. Every decision we make on our children's behalf is loaded with guilt. We question ourselves constantly. The very last thing we need from friends, family and strangers is to be invalidated.

Telling me it's "just a phase" makes me feel like I'm a complete failure as a parent for putting my child through all the medication trials and changes and dose adjustments and blood tests. Who does that for something that's "just a phase"?

Are You Saying Mental Illness Isn't A Real Illness?!

The comments also cut at the very credibility of my son's illness, as if to suggest there isn't really anything wrong with him. Would you tell a cancer patient's mother her child is just going through "a phase"? I strongly doubt it. When you say those words to me, you're contributing to the stigma of mental illness--suggesting it isn't real or it can be overcome by proper parenting or education.

I know the majority of you are merely trying to be polite. You don't know what to say, so you pull these comments out of the air and hope for the best. It would be better you said nothing at all. A sympathetic nod would be an improvement. Offering a sympathetic ear or an hour of free babysitting would be better.

Some of you, however, are not trying to be polite at all, and have every intention of belittling me and the entire study of human psychiatry. I would ask the people in this category to please, find a hobby. I have enough on my plate without your self-indulgent proselytizing (Talking to Critics of Psychiatry [Antipsychiatrists]).

APA Reference
McClanahan, A. (2011, August 16). My Child Has a Mental Illness: Stop Saying It's a Phase, HealthyPlace. Retrieved on 2022, August 19 from https://www.healthyplace.com/blogs/parentingchildwithmentalillness/2011/08/please-stop-telling-me-everything-is-okay

Stephanie - you are awesome. Thanks for this thoughtful response. Don't count yourself out. Recovery is possible, and many former psych "patients" go on to lead normal, healthy lives. Please reach out to more "survivors." There are hundreds of thousands, maybe millions of people becoming aware of the injustice of biomedical treatment and bad advice.

Sorry, one more thing and then I'll leave you alone. I read a little more of your blog, and I listened to one of your audio entries. If your child is "bi polar" then he must be on atypical antipsychotics already. If so, watch out. The long term outcomes for those drugs are almost universally bad. They shorten a person's life. Not to mention stop them from being able to feel empathy and love. They cause movement disorders. Older(or middle aged or young) mentally ill people who look really messed up and crazy often look that way because their medications have done that. It's a really horrific thing to realize. Also, if your child wants to drink socially later on- forget that. He could end up in the hospital from a few drinks.
The worst thing though is the inability to feel love. How will your child navigate the world without that ability? It's a quite common effect and the longer the person stays on those drugs the more likely they are to experience it. It can happen very gradually. This happens because atypical antipsychotics inhibit DOPAMINE. That is how they work. Dopamine is the neurotransmitter of love and reward. It allows you to enjoy music. It is necessary for positive feeling. It is necessary for learning. I have a friend who is 19. Was on add meds from the time he was a child which made him psychotic which made them put him on an antipsychotic that nearly killed him, gave him sexual dysfunction and breasts. Antipsychotics lower hormones in males and females. Seriously, i don't care how "bad" your child behaves. Unless, he is actually knifing people you need to get him off that stuff, if he is on it. I mean atypical, typical or otherwise antipsychotics. It may be hard to get him off the drugs Withdrawal can be horrible and make it appear that the person is acting crazy because they are crazy instead of because of the effects of withdrawal. Your doctor may not be able to tell the difference. You may have to take him out of school for a few weeks and watch him closely. Who knows how it will go? Anyway, there's my two cents.
Your child is not bipolar because of excess dopamine transmission, but if you have him on antipsychotics of any kind his dopamine is being inhibited. I recently talked to a neurologist about this and he said that the dopamine theory of schizophrenia is incorrect. They don't know what causes mental illnesses. They can't look at a psychotic person's brain and find any differences between it and a non psychotic person's brain. Bipolar never had a dopamine theory. They just used the same drugs they were using for schizophrenics on bipolar people.
There is the wikipedia article on antipsychotics. They are also called neuroleptics.
http://en.wikipedia.org/wiki/Neuroleptics
Also, this guy.
http://www.wildestcolts.com/index.html
And this guy.(he was instrumental is stopping lobotomy in the U.S.)
http://www.huffingtonpost.com/dr-peter-breggin
one more thing... my mother has to live with the fact that because she trusted psychiatrists and because she believed in what our popular dialogue about psychiatry is her daughter's life is ruined. I will never get married and have children. I will never go back to college and get a degree. I am mentally incapable now. I have been drugged into stupidity. Serious musicians are told never to get on meds because it will take their music from them, and it is true. It will take everything from you. Whatever you valued most is what will go. I am lucky that I am not in physical pain all the time anymore. I ended up in the hospital hardly able to move my arms or legs and unable to sleep and that turned out not to be the worst of it and it never really ends. There is nothing else that can be done for me. That's why I am bothering you.
Now, I will leave you alone.

No doubt. I have two children with special needs and I get this A LOT. Please, it really makes me feel like they think I am incompetent and I feel I need to prove something to them. Most of the time I just stammer with a blend indignation and shame regarding the fact that they just don't know what we see or experience day to day...
I just found you here through a comment in a New York Times article about a mom and her little four year old boy struggling with a mental health issue. http://community.nytimes.com/comments/parenting.blogs.nytimes.com/2011/08/01/a-sons-demon…
I too blog about my two children with mental illness diagnoses at, Life's Twisted Stitches. http://www.lifestwistedstitches.com I'd like to subscribe to your feed here, but I don't see a link accept for the newsletter. Do you have any in site on that or do y have another blog? I look forward to reading more of your posts and getting to know you in our shared struggle.
Blessings,
Melody

You might be interested in this NPR segment.
http://ttbook.org/book/daniel-carlat-psychiatric-crisis
And this book
http://www.amazon.com/Anatomy-Epidemic-Bullets-Psychiatric-Astonishing/dp/0307452417
The author is a pulitzer prize finalist investigative journalist. Here is his info on his website
http://robertwhitaker.org/robertwhitaker.org/Author.html
I don't think mental illness doesn't exist, but according to current science there is no way to identify it.
The drugs we use are for outdated theories of mental illness. They are still used for many reasons-they make money, doctors see definite effects etc... This world isn't perfect. The flow of information isn't perfect.
Most people respond to adhd medications. That's why college students use them to study better and more. The medications aren't specifically fixing your son's specific problem. They are having an effect on him like they would everyone else.
I don't know what's wrong with your son. No one does. No one can. I can't tell you it's the wrong thing to give your son these medications- no one can know the outcome, but I can tell you that add medications have the potential to make a person psychotic and once they become psychotic they will get treated with an "antipsychotic."
I also know that all of the psychiatric medications have the potential to cause neurological side effects.
Some things you don't find out until it happens to you. I really hope that things go well for you and your son.

I completely agree. But mine is a little different. My sister has been telling me how to parent. My son has adhd and an anxiety disorder. He doesn't like to go out much, he sees a psychiatrist and a therapist. I'm doing the best I can to get him to do things. At the same time I'm dealing with my own problems, bipolar and anxiety. She makes me feel small like I'm a bad parent.
Michele