Love Me, Love My Kid: Stepfamilies and Mentally Ill Children (Part 1 of 2)

Dating as a single mother--tough. Dating as a single mother of a child who never sits still, throws outrageous tantrums, gets kicked out of preschools and gives you black eyes--tough to the point you might want to consider adopting several cats and joining the spinsterhood. Once in a while, though, life throws you a curve ball, and you might just meet Mr. Fantastic--that's when the real work begins.

Mentally Ill Children Can Push a Marriage to the Limit

My husband and I have been married five years this January. Certainly not a "golden" anniversary, but given what 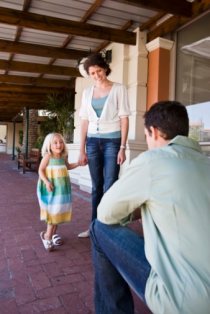 we've endured together during those five years, we at least deserve Congressional Medals of Honor.

Ask any parent--children take a toll on even the best relationships, especially if a child has a chronic illness or condition. When one spouse is not that child's biological parent, things can get even trickier. If Peter had suffered ADHD or Jan had been bulimic, the Brady Bunch may not have seen a second season.

I like to think our marriage is one of the good ones. That's not to say it's always starshine and flowers. We definitely argue, generally about one of two things: money, and the kids. Having a mentally ill child creates material for both--the money arguments are obvious, what with the extra expenses of therapy, psychiatric appointments, medication, even special schooling or childcare arrangements.

Arguments about children are common for married couples, particularly when there are children from a previous relationship. Parents of mentally ill children, however, are often especially sensitive to criticism, both real and perceived, which can lead to substantial marital tension.

Defensive About My Bipolar Child 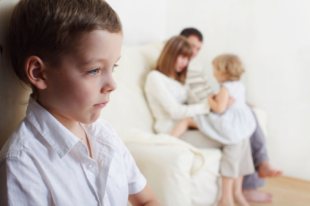 myriad of complete strangers. By the time I arrived home most days, I had been fighting all day, and it was hard to turn it off. My husband could make the most innocent comment, and I would take it as a critique of Bob and, therefore, of my ability to raise children. I had convinced myself I was Bob's only ally--it was Me and Him against The World.

The birth of Bob's younger brother only added to my insecurity. I now worried Bob would fall entirely out of favor with his stepfather, being the "stepson" with problems and not the "real" son (who was, of course, an absolute joy from the beginning). I became hypersensitive, ready to pounce on the tiniest slight.

My fears, of course, are unwarranted. My husband may not be Bob's biological father, but he has always treated him like one of his own. I've relaxed a little over the past year or so, but still occasionally have to be reminded - "I'm on your side."

APA Reference
McClanahan, A. (2010, November 30). Love Me, Love My Kid: Stepfamilies and Mentally Ill Children (Part 1 of 2), HealthyPlace. Retrieved on 2022, August 10 from https://www.healthyplace.com/blogs/parentingchildwithmentalillness/2010/11/love-me-love-my-kid-stepfamilies-and-mentally-ill-children-part-1-of-2

I can relate so much to what the author has been through! My son was diagnosed (ADHD at 4 and Bipolar at 5) after I divorced my husband. Prior to that I was always explaining my son's behavior to everyone and also trying so many ways to discipline him properly and raise him well. After he was diagnosed I then had the job of convincing everyone he was not a "manipulative" spoiled child! My family did not get it, much less the rest of the community. All the appoinments my son and I have been to together, all the medication trials, all the rages and outbursts from him and finally all the love we have for each other. It really does make a mother feel like it is she and her child against the world! I waited 7 years to date after my divorce, my son is stable and he seemed open to understanding. If it was just the three of us it would be ok-but enter his 23 year old daughter who has just been diagnosed with major psychiatric disorders and is a not easy to live with! I have been here 7 months and my son is doing well but I miss it just being the 2 of us!

Taylor, I agree, sometimes it seems like "just us" was easier to deal with. But it was also pretty lonely. I have to give my own husband props, I'm sure he's often wished (to himself) Bob would go live with his dad, but he's always been there when we need him. I'm glad your son is doing well and I hope it continues!