Mental Health Advocacy for a Loved One 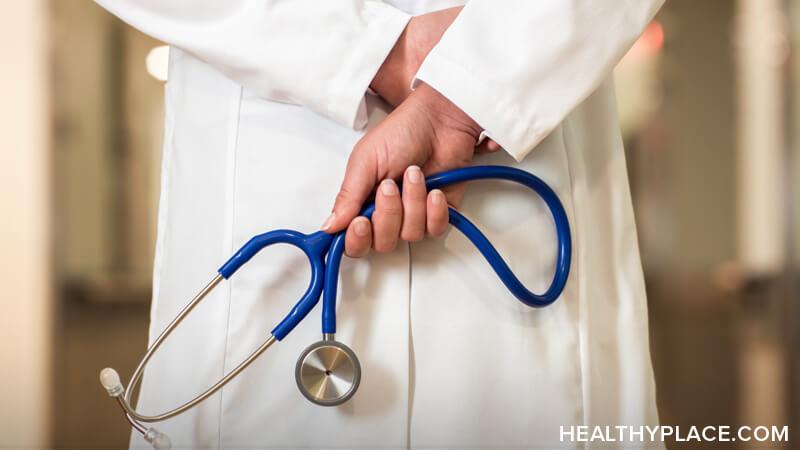 Mental health advocacy for a loved one fights the stigma that exists in the most unlikely places. The past few weeks were quite overwhelming. Following a stay in a psychiatric ward, my husband was released. We dealt with multiple issues during that stay, including poor psychiatric care and a bizarre meeting with a highly unethical psychiatrist to discuss said care. In short, be aware that psychiatric hospitalization, while very important, also may lend itself to abuse of power. Involve yourself in your loved one's care because mental health advocacy for your loved one is crucial.

Mental health advocacy for my loved one required me to stand up to a psychiatrist. The problems began shortly after my husband was hospitalized when he began describing concerning interactions with the attending psychiatrist. I initially thought that he was exaggerating about his doctor. However, when my husband's stay continued despite significant improvement, I began to be concerned. After learning of several explosive arguments between the doctor and my husband, the last of which resulted in a protective custody order, I drove to the hospital and demanded to speak with the doctor. I responded to a litany of excuses by digging in my heels and finally received permission for a meeting.

I'll admit that I am somewhat biased by the fact that this meeting related to my husband's care, but know this was by far the most concerning interaction with a mental health professional of my entire life. The doctor did not answer a single question of mine during a meeting in which he made highly unethical comments. For example, the doctor told me that he did not want to label my husband with schizophrenia because it would "ruin his future careers, relationships, and would ruin his life." He also told me that my husband had failed as a physician assistant and as a professor.

Mental Illness Does Not Make Your Loved One a Failure

I was shocked. I could not believe that the person caring for my husband uttered these words. I replied that my husband was a great instructor, had good career prospects, and possessed great relationships with his family. I told him that ending a career as a physician assistant did not make my husband a failure. Suffering from mental illness does not denote failure.

He then explained that I should fear for my safety and that of my children if my husband returned home. By then, I was shocked, upset and angry. I asked if my husband would be released soon, to which the doctor laughed and said no. I immediately walked out of the meeting and filed a complaint with the hospital. My husband met with a designated examiner from the state. The examiner said that she had no idea why he was still a patient and he was released.

Be a Mental Health Advocate for Your Loved One's Care

As we left, a nurse apologized for what happened and said they knew it was wrong but felt they couldn't say anything. What then are we supposed to do when our loved ones are mistreated right before our eyes? How should we react when the very individuals who are supposed to be caring for them are instead perpetuating vile stigmas?

I did not write this post to scare you, but to make you aware. Know that, though there are many good doctors, there are some poor ones as well. It is critical to listen to your loved one and follow up with his or her providers to ensure they are receiving proper care. The very nature of psychiatric care and hospitalization lends itself to abuse of power. Be aware that you may find yourself facing the stigma surrounding mental illness where you least expect it. Therefore, be a mental health advocate for your loved one at all times.

Megan Law is a graduate of Boise State University with a degree in psychology. Her education is critical to her role in supporting her husband as he learns to live with schizophrenia. Megan is the wife of Randall Law, the author of Creative Schizophrenia here at HealthyPlace. Her hobbies range from running her own wedding cake business to sketching, painting and designing landscapes with stained glass. She and her husband are currently renovating an old stone farmhouse built in 1910. You can follow Megan's projects and her 3 mischievous kids on Instagram and Facebook.

Mental Health Hospitalization Stigma: Remember Your Worth
Coping with a Lack of Support from Others
Judy Hall
June, 5 2019 at 5:38 pm

Hi Megan, Thank you for writing this post, your words have given me strength. I have had the same primary care doctor for the past 20 years. Over the last 5 or 6 years, I've been aware of her increasing frequency of dismissing any ailment I might have to my depression and anxiety. Other than my annual exams, I have only had twelve (12) appointments with her for illness...in 20 years. Two years ago, I began having unusual symptoms of pain and burning in my nose, throat and mouth. They had started out infrequent and mild, but within a few months had become regular and quite painful. She ordered a battery of tests which came back with normal results. She told me my symptoms were probably due to anxiety and wrote me an Rx for topical lidocaine. I continued to get worse and 6 weeks later made another appointment with her. She referred me to an ENT doctor who found nothing but referred me to an ENT oncologist to rule out anything sinister. The ENT oncologist could not have been more dismissive or disrespectful to me. After he received the results of some tests he ordered, he stood in front of me with 3 medical students attending and proceeded to tell me my problem was "aural" or "global" in nature. I asked him if he could explain that further. He smirked and said, "Well, I see on your chart you have been in treatment for anxiety and depression for many years, I think that has more to do with your symptoms than you might believe." I could have cried. I sat there feeling humiliated and angry. I called the nurse who attends my primary care doctor and asked if I could read my records as they appear when a referred physician sees them. She emailed me the copies sent to both the ENT and the ENT oncologist. Under my name, birthdate, height, weight and blood pressure, in bold print were the words, "In treatment for severe anxiety and depression since 1997". I felt like I'd been hit with a brick! She was selling me out as a "head case" to any doctor she had referred me to. Upon further investigation, I found that same information appearing in the same way on every single mammogram I'd had, an ER visit I'd had for a bad fall and on a surgical report from an outpatient surgery I'd had a few years ago. I receive all of my medical treatment, except for psychiatry, at a University Hospital and Clinics. (my health insurance is only accepted by that institution) I have been the victim of unforgivable mental health stigma at a research/teaching university hospital and clinic! When I think of what I have been subjected to and judged upon by people who should know better, I feel sick to my stomach. What more, I think of all the medical students who have attended every appointment I've had and know they've been trained in practicing the same stigma as the physicians who teach them. Stigma is alive and well in the medical community. I hope everyone who reads this will make it their business to get their hands on their medical records and demand that their mental health problems are noted correctly and placed in the proper perspective. I feel utterly betrayed by this woman I've trusted for so many years. I need to address this with the institution, but I've been afraid. I have a feeling my experience and complaint will be summarily dismissed, healthcare institutions like university hospitals place great value on protecting their own.

Hi Judy! Thank you for reading and for your comments. I am sorry to hear about your experiences. It is very difficult to deal with a medical ailment of unknown origins, and this is made more difficult when certain medical professionals behave in a calloused or unprofessional manner. While symptoms of anxiety and depression certainly can influence or mimic physical ailments, it isn't acceptable to coldly write off physical complaints in this fashion. I hope that you are able to resolve this issue satisfactorily and help reduce the stigma surrounding mental illness.

I have run into this not just with mental health, but other medical situations as well. I’ve had to stand up to doctors for several family members, including my daughter. It’s very intimidating to say the least. I’ve learned to not just take their word for things, especially if my gut and knowledge of the situation don’t agree with them. It’s a hard thing to do but I’m glad you did it and I’m glad I’ve done it. Unfortunately it has made me wary of medical professionals in general. Stay strong Megan! I know it’s hard.

Rachel,
I am so sorry you have gone through similar situations. It is comforting to know that I wasn't wrong in standing up for my husband and disagreeing with the doctor. It is hard though when they are supposed to be the person you go to for answers. It has made us wary of medical professionals too, and now my husband is terrified of ever going back to a psychiatric ward. I just hope after all this that maybe the doctor will be monitored so he cannot do the same to another patient.

This is such an important topic of conversation to be shared and discussed openly. While it is extremely upsetting to think of, unfortunately these instances do occur and it is so important that we're all aware of them so we can better support one another and those we love. Mental illness absolutely does not equal failure. I'm so glad you were able to advocate for your husband and thank you for sharing this experience so others can learn from it.

Lizanne, thank you so much for ready my blog! It is very unfortunate that things like this happen, I just hope that by speaking out, that maybe it will save another family from having to go through the same thing.