I enjoy reading blogs written by other parents. It’s great that the Internet has given us a virtual park bench on which to sit and share ideas, tips, frustrations, and joys. I read all kinds of parenting blogs (I dislike the term, “mommy blogger”), not just those about raising special needs kids. I say this as preface to what has historically been a statement that has elicited blow back. Here it comes:

I cringe when a parent blogger contributes to mental illness stigma with their blog title. 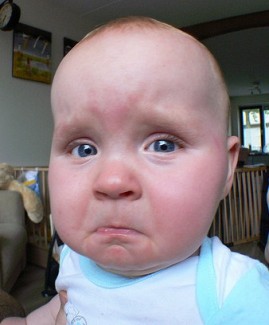 I mean it. I physically curl up into a ball and wrinkle my face like a pouty toddler. I am sure these parents don’t mean to hurt anyone when they use words like “insane,” “psycho,” and “bipolar,” in the title of a blog that is not about mental illness. I chalk it up to ignorance of stigma, not vitriol. Sometimes I reach out to try and educate them about the stigma of mental illness, and how these words contribute to it.

I got into it on Twitter last Fall with a woman whose blog title had the word “insane” in it. What started with me trying to explain to her (and the legion of devoted followers that jumped to her defense) that using terms that have historically been used as slurs against the mentally ill contributes to the stigma that our kids with mental illness face today devolved into the responses I typically get when I stick my nose into it:

Medical terms for brain-based disorders have been twisted into derogatory slurs for decades. But when you have a disorder with a name that has a slang definition of bad or scary it clouds society’s perception of you and can cloud your perception of yourself. That’s the very definition of stigma. That’s the reason why, in 2004, Special Olympics started the campaign to end the r-word. Its athletes specifically asked for help in ending the use of the word, as what was once a medical term for an intellectual disability had been twisted into an adjective for something or someone bad. Generally, society seems to be on board with ending slang use of the r-word, as we become more and more aware of the hurt it causes. So how do we get our society to understand the same is true for mental illness?

Ten percent of the teenagers in this country are dealing with some level of mental illness, right now. Centers for Disease Control and Prevention (CDC) statistics show that suicide kills more of them than birth defects, cancer, heart disease, and lung disease combined. Yet according to the National Alliance on Mental Illness (NAMI), one of the reasons 80 percent of kids don’t get the mental health care they need is the fear of the stigma associated with being labeled “insane,” or “psycho,” or “bipolar.” I feel it’s important to point out to the parents whose blogs reach millions of other parents every day that the words they use as adjectives can be hurtful and stigmatizing, and that stigma is endangering our children’s lives. I won’t just lighten up.

About Chrisa Hickey, Author of Mental Illness in the Family Blog
Learning to Let Things Go When Parenting Mentally Ill Kids
DIane Cook
April, 5 2014 at 6:53 am

Thank you so much! I agree wholeheartedly. In 12-Step programs I frequently hear the words "insane" "crazy" "psycho" - It's difficult to raise the issue during a meeting. I need to find a way to advocate for word awareness from the viewpoint of sharing "experience, strength and hope."

Hi Diane - thanks for your comment. I thought it was interesting that, even on comments about this blog post on Facebook, I was told to "lighten up". We do have a very long way to go!