Life After Depression Treatment: A New Type of Struggle 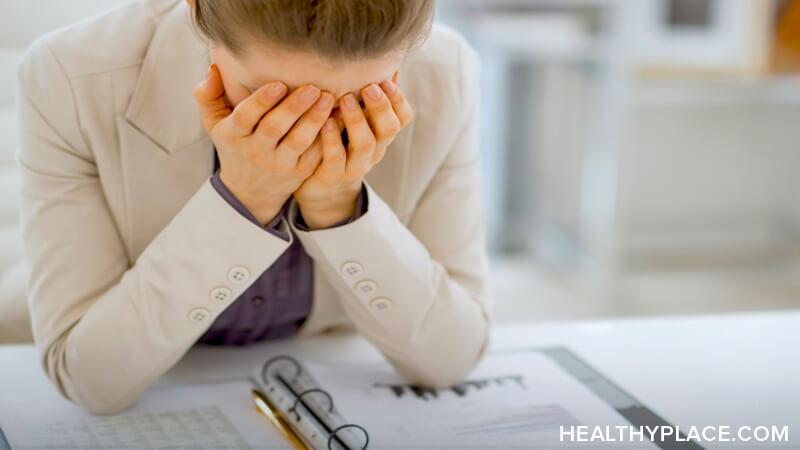 Life after depression treatment isn't what I thought it would be. I always thought the depression would fade away after my treatments concluded. Electroconvulsive therapy (ECT) had brought me out of a non-functional state. After transitioning to transcranial magnetic stimulation (TMS), I was feeling even better. My medications were finally working. I was no longer numb. I was capable of emotion again. At last, it seemed like the depression was finally gone. But life after depression treatment wasn't all roses.

I realized shortly after that the depression was still there. After living with this illness for years, I had developed unhealthy ways of dealing with stress and sadness. Even though the treatments had balanced the chemicals in my brain, they couldn't take away my bad habits.

Negative thinking is the habit I struggle with the most. During the worst of the depression, I would talk myself out of things that I was completely capable of doing. When I was in college, the nights before exams were agony. My anxiety would quickly turn into despair as I told myself how stupid I was and that I wasn't trying hard enough. In the morning, I would stay hidden under the covers rather than going to class, consumed by the negative thoughts.

It was a temporary relief to avoid the stressful situation. Then I would feel guilty for missing class and start hating myself all over again. This was a constant battle. I soon withdrew from classes altogether.

After the depression lessened, I tried to return to school. At the beginning, life after depression treatment seemed to be going smoothly. But as soon as the semester began to get stressful, all the negative thoughts came rushing back. It didn't matter that the ECT and TMS had helped me. I had been struggling with depression for so long, it was an automatic response to berate myself. I told myself I was incapable of doing anything right. Despite being in a better place, I had to drop out again.

Another habit that developed because of the depression is apathy. When I was depressed, I would do things to try and make myself feel better. Things like watching a favorite TV show, going on a drive, or journaling brought me no joy. My mind was being trained to avoid doing anything that usually made me happy.

I thought that after the ECT and TMS, I would immediately jump back into all the things I used to love. Life after depression treatment didn't go that way. I could be having a good day, but nothing sounded fun or interesting. Deep down, I was too scared to try anything for fear that I wouldn't feel happiness. Instead of taking the risk, I chose to lay in bed and stare at the ceiling for hours.

How I Deal with Bad Habits in Life After Depression Treatment

I've come a long way in the two years I've been done with both ECT and TMS. But I still have bad days and struggle with the habits I developed during the worst of the depression.

One thing I've been working on in life after depression treatment is the way I talk to myself. I'm trying to pay attention to what thoughts enter my mind, especially in stressful situations. When I feel the negativity building, I tell myself that those thoughts are false and turn them around to say something positive about myself (Don't Let Toxic Thinking Patterns Rule Your Life). Sometimes it works, sometimes it doesn't. It is still something that I am working on.

To combat the apathy, I've been forcing myself to do things that used to interest me. Writing this article is an example. I love to write, but it’s so hard to get myself started. I may not feel like it, but I make myself do it anyways. Many times, I start to enjoy myself as soon as I get over that initial hump of actually starting.

Bad habits are a part of my struggle with depression. I can work hard to break them and hopefully get close to the peaceful place I strive towards. They may always be there, but I know I can find strategies to combat them. It's part of the healing process.

APA Reference
Capper, J. (2018, February 6). Life After Depression Treatment: A New Type of Struggle, HealthyPlace. Retrieved on 2022, May 29 from https://www.healthyplace.com/blogs/mentalhealthforthedigitalgeneration/2018/02/depression-after-treatment-a-different-type-of-struggle

I’m up to my 7th session of ECT. And have noticed an improvement on my 3rd and 5th. My biggest concern is
relapsing into old habit worst - not getting out of bed.

Sherry,
This treatment worked for me after 10 years of major depression when all medications and therapy stopped working. This is something that you really need to do your research on and think about a lot. It Will give you brain damage (mine was just memory loss-I say “just” b/c there are many that it does much more to) and give you cognitive issue. For me, it was the best thing I’ve ever done for myself because I’m alive and depression free (3 years later) but it’s been a hard road and my memory from years prior and after are gone for the most part. And it prevents me from making any real long term new memories. I still make them but you don’t get to decide what you will remember and what you won’t. I live off reminders on my phone and notes I leave myself lol. This is a last resort treatment. If it comes between suicide and ECT, you have nothing really to lose. That is what I had to come to the conclusion on. I’m better but I’m not the same (for the good and the bad). And then habits have to change. If you go back to living in bed, you will more than likely relapse so the effort if/once you feel better is imperative. You will also need a sting support system. I lived with my parents for awhile afterwards (I want to say months but I don’t remember tbh) b/c I was unable to care for myself and luckily my job of a year and a half let me re-train because I couldn’t remember what I did, much less how to do it. It was as if people were speaking Chinese to me. School is a no go but it was also a no go while I was depressed. I’m sorry if I’m giving you opposite views but I’m a strong believer in people understanding what will more than likely happen to you with this treatment since my dr told me my memories would come back within 6 month max. Again, if it comes to your life on the line like mine was, I would absolutely do it. I hope this helps. Peace and love to you. -Becca

Hi Jenny! I think you’re wonderful! One question I have for you is would you say that the ECT was worthwhile? my doctor is recommending this for me and I am a wee bit nervous about it.

Depression is truly a slippery slope. Those darkest, deepest depressions can leave you with a trauma imprint all it’s own. Depression is pain and severe pain can induce trauma. Emotional processing and reintegration may help with some of this through EMDR and Janovian therapies.

Thank you so much for sharing! This is a perspective I had never considered.

I'm so glad you liked the article! It is something I never realized either until I really started thinking about it. It's crazy what the brain does. I think in long run, it truly makes us stronger people.

I have been feeling the same way about the bad habits developed during depression. Lately I’ve been feeling like I can never get back to the productive, energetic, happy person I was. I’m feeling happier but still struggling with being productive and finding outlets for my regained energy. Reading your article has gotten me thinking of focusing on those bad habits and trying to conquer them next.

Hi Krysta! I'm so glad that you're feeling happier, but I completely understand. It is a huge challenge. But it is completely possible, just a lot of work. It sounds like you've really taken it upon yourself to make that happen. That is so awesome. I think that as we work to overcome this, we will find happiness in new, wonderful things.

Love this insight-it takes constant practice to force those good thoughts in! good read! thanks!

Thank you so much, Debbie!