As adults with ADHD, we may have a tendency to fidget. Fidgeting isn't something that's often seen as adult-like behavior. I was told a few months ago that when one goes to a job interview you should never fidget and pretty much you should never fidget at work. See, I asked if it was okay to start fidgeting after you got the job, but the question wasn't received all that well and it was basically a "no." So, what the heck are we supposed to do to control mostly unconscious behaviors? 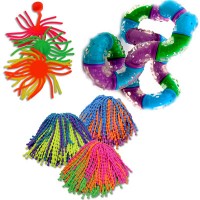 Fidgets are my number one answer to fidgeting. They're not always in the most adult-professional-friendly of colors, but they work. I would post some links, but I haven't found the ultimate site yet. When I want to buy a new fidget, I either go to the dollar store section of chain store or do an internet search for "adhd fidget." So many items come out.

My favorite so far is a plastic screw with bolt. I unbolt the bolt and then I re-bolt the bolt. My wife has even taken to playing with it, because it really is fun to have something in your hands to fiddle around with. The good thing about the plastic fidget I have is that it doesn't make any noise. A lot of fidgets are filled with noise making bits and pieces, because they're made for kiddos with sensory seeking behaviors targeted at auditory stimulation.

Of course, toys are not for all of us - I typically call them "tools" to make them seem less child-like. And, because we're using them as tools, NOT as toys. When you're in a high powered business meeting, something with fluorescent colors and dangly-bits might not be for you. I suggest doodling. Having a lovely black or blue pen and a notepad allows you to take notes while getting your fidget out in doodling. Sometimes I like to practice my cursive during meetings. I'll never use my cursive skill, but it has the dual function of helping me to not fidget and helping me to focus.

I have ADHD and where I work they don't exactly look upon fidgeting with a smile. But I've found if I fidget with something that looks productive (and sometimes it can be...) they don't mind quite so much on the days where I fidget with something terribly unproductive (like my rubber band ball..) so some nights I will sweep the floor in my workspace repeatedly. Or I clean the counter until it looks like a mirror. It keeps my hands busy fidgeting, my mind is allowed to wander, my bosses are pleased and this lady is happily fidgeting away.

Lisa, that is amazing. That stinks that your workpalce doens't like it ,but look at you figuring it out! I love that you've turned someone most others would hate to do (sweeping) into something that is a positive in that it lets you fidget and thank AND please the higher ups. You are amazing!