Adult ADHD is Not a Gift?

I had some time to kill between class and my train home on Friday and I spent it watching youtube videos. A waste of time, you say? Nay! I watched videos about Adult ADHD and one in particular by Dr. Russell Barkley about the fact that Adult ADHD is NOT a gift. But, Dr. Barkley, we've been told for so long that ADHD isn't only a bunch of junk that makes it hard for us to focus, but it's something that helps us to be more creative and really good and different things. What is the meaning of this?First off, watch the video. It feels somewhat angry to me, but it's because I'm not his intended audience. Dr. Barkley is speaking to some Canadians that work with those who have ADHD, not physical therapy students from Maryland. Do check it out:

Now, I could be grumpy about what the good Doctor has to say. We could be angry about what he has to say. He does make a good point, though, and here it is: we are NOT ADHD Adults, we are Adults with ADHD.

Let's say it again: we are NOT ADHD Adults, we are Adults with ADHD. 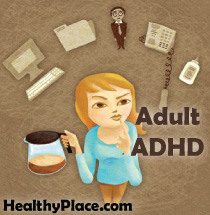 What's the difference? The former says that we are our ADHD and the latter says that it's a what we have and, therefore, a part of who we are. Dr. Barkley mentions famous adults with ADHD and states that we cannot hold their ADHD responsible for their famous-ness (I want to say greatness here, but can we definitively say that being a famous musician equates to having greatness???). There are traits inherent to these famous adults that are entirely unrelated to their ADHD that allowed them to be successful.

I mentioned this video to a friend and she was surprised to hear that ADHD often gets the credit for good things Adults with ADHD do. She couldn't think of anything special that ADHD gives you that is super-duper-great. I mentioned a trait that I think is commonly associated with ADHD: creativity. She followed up by rightly saying that there are many creative people who have not been diagnosed with ADHD. Seriously, how right she is!

We have ADHD; we are not ADHD. It's an important distinction to make, I think, and one that can allow us to feel even better about our accomplishments. We make our success, not our somewhat inattentive, hyperactive brains.

I hate people who say that ADHD is a "gift." I've achieved what I have achieved in spite of my ADHD, not because of it, and I am sure I would have achieved greater success had I not been born with ADHD. This "ADHD is a gift" crap reeks of identity politics, like people who want to claim some fractional minority racial heritage because of the social currency it now carries. As Dr. Barkley says, the "ADHD is a gift" lie is a way for people to say "wonderful giftedness we have that you don't".

I agree with what you've said, for me ADHD is no gift, and little to no positive effects of it. But I'm sure some people can find a way to use it well, but not everyone can, it's impractical. I believe that each of us with ADHD should decide for ourselves if it is a gift or curse, and choose what we do with it.

Living in the Raleigh, North Carolina, I am so thankful for the local TEACCH woohskrps that I have attended a few years ago. One of the best strategies that I learned is utilizing Calming cards to help redirect autistic children when they are on the verge of having a meltdown. Basically, I make 3 calming cards for each student (usually it's decorated with that student's favorite character/colors), and when the student feels overwhelmed, and is becoming stressed about performing a task, the child puts out a calming card, walk over to a designated area, and take a calming break for 1 minute. I use an hourglass timer. Once time runs out, the student comes back to his/her desk to perform their activity. Just to clarify, this is not a time-out as a punishment, This is a technique used to redirect the student. Another technique that I learned through TEACCH is a First Then chart. I choose 3 icons. One is for work, and the other two icons depict the student's favorite activities i.e., reading, drawing, etc. I laminate a notecard, add Velcro, and place it on the student's desk. I also laminate and add Velcro to the activity cards. I explain to my student, First work, then _____. The student places his/her activity cards on the notecard, and is a simple reminder of what is expected. It is amazing how effective First Then statements are with children with disabilities. Both the calming cards and the First Then..cards were extremely effective with a student who had Down Syndrome.

What do you call a rich white kid with ADHD? Gifted.
This movement that wants to label this curse as a gift is nothing more than a way of making concerned parents feel better about their great mistake; those nine months in the belly, all those sleepless nights - all that sacrifice - only to find out that your investment is less than ideal. That's all it is - mitigation.
I know of this because I have this curse. I failed at almost everything I've done in life and now am approaching my 40s, unmarried and unaccomplished. I remain single because really, why would I want to pass this curse to an undeserving soul? To be resented like I resent my parents for giving me this debilitation?
And all the because of something the feel-good industrial complex wants to label a gift.
Let's call it what it really is - a brain defect.

I hear you, Carlos. It's really hard. I read this cool article recently in the NY Times, though, that made a bunch of excellent points. Our brains used to be perfect for survival. We were amazing nomads and hunters, because we can go from being hyperfocused on one thing and then onto another super quickly - and therefore, do not get eaten by giant cats. A lot of things are all about perspective :)

The perspective is shaped by a world with Buildings, cars, machines, - paper, not by a need to push some antelope over a cliff. And that is what makes this so frustrating. "Perspective doesn't erase the fact that there are bills, credit scores to maintain, women to impress, and careers to pursue. So what you're saying leaves me dissatisfied. I am however aware.

Both of my parents are super successful type A person's. I inherited all their creativity and abilities to manipulate objects I 3d space, find outside the box solutions and troubleshooting of complex systems. But, because of my ADHD I barely finished HS, and generally failed at most everything in my life from relationships to jobs. ADHD is not a gift!

I'm sorry ADHD has made life so tough ... I hope you're been able to find a way to apply your creativity to find success.

It does sound angry! I have a hard time with what the Dr. says.

I definitely hear you :)

I completely agree with everything you said. First off, how ADHD is a REAL thing that adults suffer from. You don't get diagnosed as a child and have it just "go away" as you age. Also, to talk about all the great aspects that those with ADHD have, it is outweighed by all of the detrimental symptoms of constantly forgetting and losing things, and starting projects and not being able to finish them. The list goes on. ADHD is NOT a gift.