Paul made an appointment with me and arrived with a concern: “My wife keeps telling me I have ADHD because I am always misplacing things, forgetting what she says, and running late - even to work. But I have never been hyperactive, so can she still be right?”

A week later, I met Jennifer upset with what her doctor had told her. “He said I have ADHD, but I know I don’t! I am very low energy, and my biggest problem is procrastination. I have ADD, not ADHD.”

Is it ADHD? Is it ADD? What’s the difference?

The Difference Between ADD and ADHD 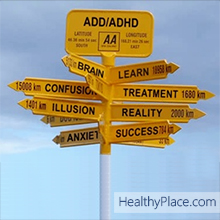 Both Paul and Jennifer share a very common confusion about ADHD: What are the symptoms of adult ADD, ADHD? What is the difference between ADHD and ADD? How do I know which one I have?

To help in answering this, it’s important to know that The American Psychological Association (APA) has recently published a new guide detailing what a person must be experiencing or have experienced for the diagnosis of adult ADHD. In this manual, the Association uses the term “ADHD” as an umbrella term to include both ADD (inattentive symptoms) and ADHD (hyperactive/impulsive symptoms).

In other words, instead of two separate ADD or ADHD diagnoses, as in the past, the American Psychological Association now simply identifies three “presentations” or types of ADHD:

“Predominantly Hyperactive-Impulsive Presentation” is the current term for individuals who primarily have the hyperactive and impulsive symptoms associated with ADHD. Again, someone doesn’t need to be experiencing all of the symptoms to have this type of ADHD:

The “Combined Presentation” is when an individual has symptoms of both inattentive and hyperactive-impulsive types of ADHD.

In looking at the symptoms for “Predominantly Inattentive” ADHD, Paul recognized a few others in himself:

Paul recognized that he has a number of symptoms of the ADHD “Predominantly Inattentive” subtype. However, for Paul to have the correct diagnosis, he needs to go to a doctor, preferably one who has experience in treatment of adult ADHD, for an exam, history, and perhaps testing, if he wants to have a definite diagnosis. The checklist is helpful in becoming aware of the symptoms that might indicate a diagnosis of ADHD, but a doctor or other health provider with a specialty in mental health needs to make the official diagnosis.

With Jennifer, I assured her that she and her doctor are probably both correct. For some time, she’s known that she has symptoms of what used to be called ADD. Her symptoms haven’t changed, only the terminology has. Due to the recent change in terms used to describe ADD and ADHD, her pattern of symptoms—similar to that which Paul has—is now called the “Predominantly Inattentive” presentation of ADHD. She can check at her next medical appointment, but it’s likely that her doctor is just using the newer terminology for ADHD—terms which includes symptoms of inattentive, hyperactive-impulsive, and combined manifestations together under one broad, umbrella term: ADHD.

What type of ADHD are you? Let me know by replying to this blog…I’d love to hear from you!

In my personal case are both scenarios , one moment are in the moon the next busy trying to do many things at the same time .Merciful Jehovah I been able to give up coffee and feeling less anxiety feeling more calm I do thank you for the publications than you share and feel myself lees crazy , lees stupid a little normal , thanks.