In 2008, the passage of the Paul Wellstone and Pete Domenici Mental Healthy Parity and Addiction Act was a huge and historic story. It was a 12 year fight by mental health advocates and championed by the late Minnesota Sen. Paul Wellstone. The parity act was passed in order to require insurance companies to treat mental health on an equal basis with physical illnesses, when policies covered both. Wellstone’s son had championed for years on behalf of his father after Wellstone’s death from a plane crash in 2002.

Why is Mental Health Parity Important? 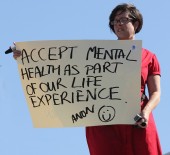 Edward Kennedy called the passage "historic," adding, "Congress has finally agreed to end the senseless discrimination in health insurance coverage that plagues persons living with mental illness for so long."

"The passage of this bill is an important victory in the fight to end discrimination against people with mental illness by making sure they have access to the mental health services they need," said Republican Sen. Norm Coleman.

As of July 2009, PTSD, autism, substance abuse, and eating disorders are covered. Federal mental health parity applies to all mental health diagnoses, but does not apply to all plans. Neither federal nor Massachusetts parity requires insurers to cover services that are not medically necessary. As you can see, there are several issues here, that the federal bill is not enough, and that there are still limits, especially with how one decides what is “medically necessary.”

When I went to treatment, which included three times in detox, and well over six months of intensive outpatient therapy, I felt so blessed to have substance abuse on my chart. I also felt blessed to live in California. I never was denied care, denied coverage because I had a substance abuse issue. I also had anxiety issues, panic disorder, eating disorders, but I believe substance abuse was my ticket in. I know if I had had my eating disorder as my primary diagnosis, my coverage or length of treatment may have been altered.

There was a recent government report from the Government Accountability Office (GAO) that analyzed employers extent of mental health and substance use treatment coverage for their employees and how that may have change following the federal passage of the 2008 Wellstone Parity and Addiction Equity Act. Limits and financial requirements for services simply cannot be “more restrictive” than those that apply to medical and surgical benefits.

The GAO surveyed 168 employers whom had at least 50 employees and 96% of employers who responded said they offered mental health and substance abuse coverage in 2008 and continued to offer it after the passage. Only 2% of respondents said they cancelled the mental health and substance abuse coverage to cut costs by providing insurance to employees.

The change most worth noting following the passage of the federal parity was enhancing the benefits by removing limitations (such as the number of office visits allowed and dollar limits in a year).

It is really important to understand that this study is positive in showing the passage of the federal parity hasn’t altered many companies who have always covered mental health benefits in their insurance packages, however it does not make it a requirement for employers to cover it.

According to a new report released by the UCLA Center for Health Policy Research, fewer than 2 million Californians have mental health problems or illnesses that require treatment, and about half are not receiving treatment, and 25% receive “inadequate treatment.”

“There is a huge gap between needing help and getting help,” the lead author of the study, David Grant, director of the California Health Interview Survey, said in a news release.

We need to stop stigmatizing mental health struggles and provide equal and better coverage. We need better integrated mental health care and screening at a primary care level and have them refer patients to specialized providers as needed. Perhaps this would limit the amount of primary care providers writing prescriptions that would be better done by a specialist who can better screen, diagnosis, and help treat the person. Or maybe that is just my own personal wishful thinking.

We obviously have a very far way to go.

*For those interested in eating disorder parity information, please go to the EDC (Eating Disorder Coalition) to read more about the FREED Act.