Talk About Your Feelings When You're Depressed

In childhood I really believed the phrase, "If you don't have anything nice to say, don't say anything at all."

I learned to smile all the time so that people liked me. I rarely ever complained, since I knew that so many people in the world had things in their lives far worse than I could imagine. It's no wonder that my family and friends only learned about my depression symptoms and feelings when I became actively suicidal.

I do a lot of writing about depression now, but even under that topic I sometimes find myself wearing a mask of positivity. It's like I create this online persona of this capable and strong mental health superhero, even though I still struggle a lot with my depression.

I'm afraid that people judge me and my mental health by my blog writing. If I write in a positive tone, I must be doing great, right?

In reality, I think I still live by that rule from my childhood. I tell myself that people with depression need hope, not complaints from me. I put way too much pressure on myself to stay upbeat even when writing about depression. 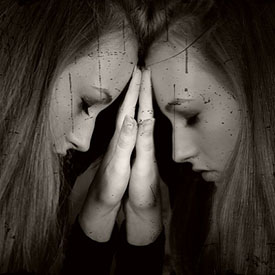 So here's some truth, because lying about how I'm feeling is a disservice to others, especially when I'm talking about depression.

I feel overwhelmed, scared, alone, and forgotten. I feel raw, ugly, broken, and used. I feel tired of living and tired of trying and just so tired of being tired. I'm exhausted from holding up this mask of okay, strong, and happy all the time. I'm not. I'm a human being like everyone else, a human being with depression.

Yet, I know that tomorrow I will wake up feeling more positive because I always feel better in the mornings than I do in the evenings. I'll remember that there's still some benefit in faking it until you make it. Sometimes smiling really does make you feel happier.

You Aren't Alone With Your Feelings of Depression

It comforts me to think that we're all just learning how to be human beings. No one was born with an instruction manual. Mental illness doesn't mean that we're flawed or broken or completely alone, even when we feel that way.

Life is about feeling. Yes, it's hard sometimes, or a lot of the time, especially if you have depression. Expressing your feelings always helps, even if the feelings aren't ones you want to be having.

Pain doesn't have to be our burden alone. No one is immune to pain in this life, so those of us with depression can talk about pain and help others deal with it when it arises in their lives. You never know, someone might surprise you by saying they've felt something similar to what you're feeling. You can't know until you risk letting yourself be known.

As of right now, both you and I are released from the ridiculous rule that states if we don't have anything nice to say, don't say anything at all. If someone tries to tell you otherwise, refer them to this post. I know what I'm talking about.

Tags: talk about your feelings

APA Reference
Schulthies, E. (2014, July 17). Talk About Your Feelings When You're Depressed, HealthyPlace. Retrieved on 2022, June 26 from https://www.healthyplace.com/blogs/copingwithdepression/2014/07/talk-about-all-your-feelings-when-youre-depressed

Depression and Acceptance of Mental Illness
Depression and Food Cravings: What Are You Feeding?
Dr. Michelle King
July, 28 2014 at 4:11 am

I'm suffering some of the worst depression I have ever had. I can't turn it to off and on like a light switch. Faking it just isn't cutting it any more. To seek help from someone else who will blame it on me. Its time we stood up and let others know it's OK. Thank you for your blog

Hi Belinda,
I'm glad my blog spoke to you. Reaching out for help is so worth it. If anyone blames it on you, reach out to someone different. You aren't alone! You're worth it. :)
Erin

I just want someone to listen and to actually take me seriously. When I say I feel like dying I mean it. When I say I would never do anything to hurt myself, I am lying. I feel ignored and irrelevant except to my therapists and doctors who are getting paid to pretend they care. When I am having a panic attack I don't need to be yelled at to calm down. My husband says he does that just to get my attention. When I share what my symptoms are I don't need to you to throw them back in my face and use them against me. Do you think I like feeling this way? I hate it. I really, really hate it. I hate being sick.

Wow, you took the words right out of my brain. This is so me inside like if you were writing about me.
I'm new to all this, and I am not really knowledgable on how all this techknowledge works. So please bare with me for I am using my cell phone on all this. This is my only way to the outside world. And to keep it away from my very abuisive husband. Thanks for listening and I will continue to read. Thanks again. Very manic depressed mother.

Hi Jessica,
I'm so glad you've found this post to be helpful. You most definitely aren't alone with your feelings. Keep connected with the outside world, in whatever ways you can. Your safety is also very important. Check out the abuse resources on HealthyPlace - they're really good and have helped me.
Take care,
Erin

Thank you for your honest feelings. It is always so hopeful for those of us going through depression to see that others feel the same way. That we are not alone. Sometimes it's hard talking to people who don't understand who have never felt such severe depression. They just can't understand the darkness and pain that we go through.

I was not allowed to have feelings of anger or sadness when I was growing up. I learned to keep it all inside until I exploded. I developed Borderline Personality Disorder because of it, along with being bullied. I am now in recovery and am doing much better thanks to Dialectical Behaviour Therapy. Please check out my blog here: http://makebpdstigmafree.wordpress.com/

I have felt so much pain lately that I have been hideing in bed..I haven't left my home in over 3 months..not even the store..I hate how I feel.I cant control my anxiety.My heart is broken.I feel dead already.Im lost without my grandbabys and my daughter is a monster..I wish I were dead

It is refreshing to see someone like you expressing true feelings. It gets tiresome reading blogs and articles that sound like every writer is totally successful in controlling their mood. It does help to know that you are not perfect. My problem with talking is that it feels like the same old thing over and over. I felt this way last week, last month, last year. What benefit is there to saying the same thing to the same people? Yes I'm tired of dealing with the fatigue and pain, etc. I'm barely hanging on by my finger tips and I'm seeing my docs and taking my meds. Some days are better than others. What else is there to say?

Hi Susan, thanks for your comment. You described your feelings very well. I get really tired about talking about my "same old" feelings every day as well. Being tired of the repetition is still a valid feeling! Keep on hanging on with those fingertips. *hugs* Erin

I hate so called professionals who cannot relate to what a real person with real injuries and/or real illnesses are. Book learned is not the same as down in the trenches living with it. For you to say you are a superhero is demeaning to us who are not superheros. What are you that we cannot achieve that too. For you to say you are just like the rest of us is for you to be honest and for us to be able to relate to you. I like you as one of us, not like someone who knows nothing of us. Thank you for your post and honesty. There is no room in this so called club of mentally/emotionally ill people for wannabe's. Thank you for showing you are not a wannabe, but that you are here not of your free will but because there is a genuine problem. Sorry, I am rambling. I just wanted to say this is the first thing of real truth I have seen from you and your site, thank you.

Thank you, thank you, thank you. I am 56 years of age and have suffered all of my life. I had an assessment in April and I did just this, what you are saying, I actually HID my true feelings, I laughed, made excuses etc., etc., I didn't get an appointment, until today when I broke down completely. I am in awe of your honesty and bravery for speaking up. It is a vile thing, depression, it clings to me like its feeding off me, as if it loves me almost, cannot do without me, it is a parasite sucking my happiness away from me. Once again Thank you and I wish you well, I wish you happiness and I wish you all the luck in the World, but, mostly, I hope and pray that the big black cloud of depression goes and never returns for you

Hi Linda! Thank you for your kind words. May depression's big black cloud leave your life soon, too. All the best, Erin

Hi Elaine, thanks so much for your comment. You exist! You matter. Sometimes when I feel like no one understands my depression I just write my feelings down in my private journal. It's no substitute for human connection but it does help me when I feel like no one really "gets it." Hold on! There is light, even when we lose sight of it. <3 Erin