Fad Dieting Is a Common Reality of Binge Eating Disorder

When you have an eating disorder, it's sometimes inevitable 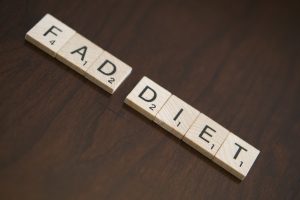 that you will try a fad diet. Fad dieting is popularized and sold as if they're fun, helpful, and will, ultimately, change your life. When you are already vulnerable to feelings of guilt and shame about your body and someone presents you with a way to stop feeling that way, it's incredibly logical for you to try it.

When I went in for my consultation for gastric weight loss surgery, I was asked to fill out a sheet with fad diets on it and to mark all of the ones I had tried. When I saw the massive list, I thought to myself, "I won't have much to fill out on this one." But as I went down the sheet, I realized just how many fad diets I had been on. Nutrisystem, Slim Fast, Atkins, South Beach, the list went on. The only thing all of these fad diets had in common was that none of them worked.

Fad Diets And The Cycle of Binge Eating Disorder

My personal experience with binge eating disorder and fad diets is as follows:

Should You Go on Fad Diets When You Have Binge Eating Disorder?

When you have binge eating disorder you need to be very careful about your eating habits and exercise and going on a fad diet is a quick way to disrupt both and frustrate yourself in the process.

Instead of going on the latest fad diet which promises to change your life, go see a binge eating disorder therapist, go talk to your doctor about healthy weight loss. Use your support network to help you through your journey and whatever you do, don't fall for the slick advertising that tells you losing weight is easy and effective with whatever method they're trying to peddle.