Eating in a Restaurant When You Have Binge Eating Disorder

Eating at Restaurants with Binge Eating Disorder At Work

When it comes to my binge eating disorder, I am put into an awkward situation whenever 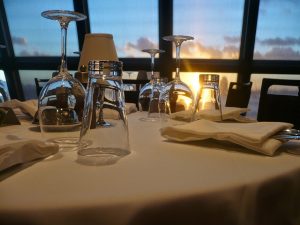 I go to work for an all-day shift at my tour guide job as I eat lunch with the groups at a restaurant. One day I was at work, leading a rather large group, and the restaurant split us into two groups. The second group was only nine people and some of the adults decided that they would enjoy a quiet meal away from their middle schoolers. I joined the adults while the other guide went to eat with the children.

I had ordered a vegetarian meal as I have recently gone from being a pescatarian to a vegetarian. The woman sitting next to me questioned me why I ordered that meal instead of eating the fried chicken with everyone else. When I said that I was a vegetarian, she started talking about some vegetarians that she knew who were so incredibly picky that they had difficulty finding food at any restaurant.

When I didn't finish all of my meal, due to the size of my stomach after my gastric sleeve surgery, a man inquired why I had only eaten half of my veggie sandwich. I said I was completely full and when they pointed out that I had plenty of food left on my plate, I had to tell them that my stomach only held eight ounces.

I wanted to scream at the man that I have an eating disorder. I don't need people questioning what I'm eating and how much I'm eating or anything else related to it. It made me incredibly anxious that everyone was calling the entire group's attentions to my eating. I just wanted my half sandwich and a few French fries with ketchup and to eat them without it being a big deal.

I was once at a restaurant on a date when my binge eating disorder reared its ugly head. I was feeling very anxious about food and as a result, I didn't want to eat. I ordered an appetizer and picked at it most of the night. My date asked me why I wasn't eating and I said I just wasn't that hungry. This was early in my dating adventures and I was unsure of how to handle this situation.

He was then concerned that I didn't like my meal, wasn't having a good time or was feeling ill. I then had to explain to him that I have an eating disorder and I had been having difficulty all day with food. I just didn't feel comfortable eating at this moment, but I was really enjoying our conversation. He didn't know what binge eating disorder was and asked me to explain it to him. I asked him to change the topic. He took this for rudeness. There was never a second date.

When you're already feeling anxious and self-conscious about your eating and your binge eating disorder, the last thing want to do is have someone continue to ask you questions about it in the middle of a restaurant. Everyone should keep in mind that they don't know someone's history. Sometimes questions about eating habits are painfully intrusive and anxiety-inducing. Don't let someone make you feel that you owe them an education or an explanation.

APA Reference
LaBranche, S. (2015, June 11). Eating in a Restaurant When You Have Binge Eating Disorder, HealthyPlace. Retrieved on 2022, January 19 from https://www.healthyplace.com/blogs/bingeeatingrecovery/2015/06/eating-in-a-restaurant-when-you-have-binge-eating-disorder

My eating disorder makes dining out a nightmare. The only method I've found successful to avoid comments is to eat X amount on one side of the plate, and discretely pile up the rest on the other side to appear I ate half. Not that complex but it's helped me avoid a lot of awkward situations.

The only way to avoid is to speak about the disorder and ask for the little amount of food that you can finish.

I don't understand your response. Also, restaurants don't serve 8 oz portions of food and asking a server to do that for you just sounds like it would draw even more attention to the problem instead of avoiding the discussion.