Why am I Panicking? Help!

Many people living with panic disorder wonder, "Why am I panicking?" Panic attacks can be frightening and frustrating and emotionally and physically painful; it makes sense to want relief from and help with panic attacks. After all, the symptoms of panic disorder are awful to live with. Even worse, sometimes it can seem like there's no reason for them, no explanation at all. When they continue to strike, seemingly out of the blue, it's normal to bemoan, "Why am I panicking?" Believe it or not, there can be multiple hidden trauma triggers and other reasons for panic attacks.

"Why Am I Panicking?" Is a Hard Question to Answer 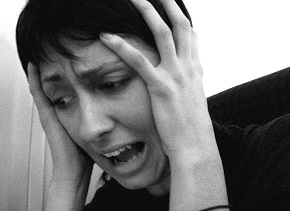 The panic attacks of panic disorder have no apparent trigger other than the fear of more panic; rather than happening in the context of something else, they seem to have no cause (When Anxiety Strikes Without A Cause). No wonder people who live with panic disorder frantically wonder, "Why am I panicking?"

While panic disorder is complex and there isn't a single cause; but psychologists have come to understand contributing factors. These factors are often hidden, tucked quietly in the background, but when we begin to uncover them we can begin to solve the mystery of why we panic.

Possible Answers to the Question, "Why Am I Panicking?"

Given that we feel anxiety and panic throughout our entire being, it makes sense to look everywhere for factors that contribute to panic attacks. When we do a full-body scan, we can began to answer our own question, "Why am I panicking?" These four areas offer some welcome explanations:

1. Physiological -- This factor involves biological evidence. In the 1990s, researcher Donald Klein proposed a theory that natural goings-on in the body become misinterpreted by the brain, thus triggering panic attacks. He called it the suffocation-false alarm theory. It's been met with varying degrees of acceptance, but many psychologists believe that it makes at least some sense and is worth exploring further.

At its essence, the suffocation-false alarm theory purports that carbon-dioxide levels in our bodies naturally fluctuate, but in people with panic disorder, the brain interprets a drop in these levels to be life-threatening. It kicks into action by increasing the breathing rate, causing breathlessness and hyperventilation, which increases the feeling of fear, which leads to other panic reactions. This contributing factor tells us that the body itself is partially responsible for its own panic.

2. Cognitive -- This is the realm of thoughts and information processing. Here, our senses take in information from the environment, and our brain interprets the input. Often, though, with anxiety, thoughts aren't always trustworthy. Anxious thoughts can play a big role in answering the question, "Why am I panicking?"

3. Emotional -- Someone who lives with panic disorder experiences the emotions of worry and fear quite intensely. These emotions are centered around the fear of panicking yet again, especially in public. Here, the emotional fear of panic ironically induces more panic attacks.

4. Behavioral -- Naturally, we humans want to avoid things that are unpleasant. To call panic attacks unpleasant is a gross understatement. Because of their very nature, we want to avoid those places and events where we have panic attacks. Avoidance, though, serves to fuel our fear and anxiety, thus increasing the likelihood of continued panic attacks (Living With The Cycle of Anxious-Avoidance: Trying To Get Out).

While no single one of these elements on its own is a direct cause of panic attacks, each is a contributing factor. Beyond that, they are all intricately tied together, and each one exacerbates the others. Thankfully, once we're aware of these hidden factors behind panic attacks, we can pick them apart and address the issues rationally. By exploring the question, "Why am I panicking?" we can begin to understand, and thus reduce, panic attacks.

Tags: panic panic attack Why am I panicking

APA Reference
Peterson, T. (2015, September 17). Why am I Panicking? Help!, HealthyPlace. Retrieved on 2021, September 16 from https://www.healthyplace.com/blogs/anxiety-schmanxiety/2015/09/help-why-am-i-panicking

Heightened Anxiety for No Reason? Four Ways to Handle It
Nighttime Anxiety and Getting Back to Sleep
peter lawford
December, 5 2018 at 7:26 am

If you're going to panic, it's best to try to panic slowly. There's usually no rush needed.

Hi Peter,
I'm not sure if you were being serious or trying to be funny, but you do raise a good point. Panic attacks can happen quickly and be very intense. While having the attitude to panic slowly and not rush doesn't quite work because it's not that simple, one of the best things for a panic attack is to slow down. Regaining control by breathing deeply and slowly (rapid breathing fuels panic because the brain thinks it's suffocating) is helpful. It takes time to master, so patience is in order. Being mindful of a single point in the room or a calming visualization also slows the racing thoughts associated with panic. Thank you for mentioning slowing down.

I read your article and makes perfect sense to me. I never had anxiety attacks until I was hospitalized with a serious infection. I had been bitten by a brown recluse spider and the treating physician wasn't handling it well. I ended up unconscious and had to be rushed into surgery, central line placed, and 3 liters of puss drained from my hip and surrounding areas. The infection had gotten into my bloodstream and part of my brain was damaged. Exact damage we don't know. This was in 2001. I know it affected my memory recall at times and after my hip healed I went shopping and for the first time in my life I experienced anxiety attacks. I was in the middle of a Wal-Mart superheated. I went looking for my spouse, didn't spot him, and started getting all clammy, couldn't breath and just broke out crying. I didn't know why except I was there and couldn't find him. I was terrified. I felt like a 2 year old. After numerous times of this happening, sad to say even when I knew where he was, we got walkie talkies. Really good ones We got 4. So both my kids would have one and my husband and myself when we all got together to go shopping. It helped. Just to know I had help there at my fingertips. They were later replaced by cellphones. I still anxiety or panic attacks as I get them in cars in cars get to close or if I am in a crowd. I try to avoid things that may give me problems. I have never had a driver's licence, never wanted one. I am 58 yrs. old. Now, is not the time, given my anxiety to think about it even. So, there is my comment. Sorry for the length. Maybe, it can help somehow.

Hello Joy,
Thank you so much for sharing your story, and don't apologize about the length! I think this is going to be helpful to people who visit. I love your idea of walkie talkies and cellphones used for this purpose. Anxiety can be awful, including the way yours hit after experiencing some brain damage. The fact that you keep moving forward despite this is inspiring.

Hi Diana,
Thanks for your feedback! I'm glad you like the information.