Is Sex Better When You're In Love?

Is sex better when you're in love? And why casual sex can be attractive. Read also about sex in a long-term relationship

Is sex better when you're in love?

Some people prefer sex as part of a long-term relationship while others find familiarity a real passion killer. Psychosexual therapist Paula Hall takes a closer look at casual and committed sex.

The term 'casual sex' implies there's no commitment to the other person. Although this doesn't necessarily mean there's no sense of responsibility or care, in a casual encounter you're more likely to focus on the here and now. You can enjoy the moment without much thought about what your partner thinks of you or what you think of them. Without the emotional complications of a relationship, you're free to concentrate on physical satisfaction.

Sex with a stranger - for many people, unfamiliarity is the key to casual sex. They find the mystery exciting and, if there's no chance of meeting again, inhibitions can be cast aside. It offers the chance take on a new identity and act out a secret fantasy with little fear of rejection.

Element of risk - danger is generally part of casual sex. There's a sense of being naughty, of tasting the forbidden fruit. Some people deliberately add to their sexual encounters by choosing public places or partners they feel should be off-limits.

Why casual sex can be attractive

Psychological reasons - some people pick up messages during childhood that casual sex is wrong (and therefore more exciting). Others have been left with a fear of intimacy by their experiences.

Physical reasons - when we take risks and feel fear, the sympathetic nervous system is stimulated. Breathing becomes faster, blood pressure rises and adrenalin is released. Our body enters a state of high alert. If you add sexual messages at this point, the body will respond faster.

Sex when you're in love

Italian scientists have discovered that the biochemical state of falling in love is similar to obsessive-compulsive disorder. The yearning of couples to be together and learn about each other in intimate detail is overwhelming. They grab every opportunity to show affection and get as close as possible to one another.

During this period sex can be very exciting. There's still some of the mystery of casual sex and also some risk. The difference is that sex is more mutual when we've fallen in love. It's about giving and sharing ourselves physically and emotionally. As well as sexual satisfaction, we can expect to feel emotional fulfillment. Sex becomes the ultimate act of intimacy.

When you kiss you release dopamine, a chemical thought to be important for sexual arousal. A sense of risk can heighten arousal and sexual responsiveness.

Sex in a long-term relationship

Those Italian scientists say the brain returns to normal after six to 18 months. It seems it's not physically possible to stay in that manic state of obsession with a partner for much longer than that. It's then that we either fall out of love or the relationship matures.

When a relationship matures, sex matures. You now have the advantage of knowing each other well. Fear of rejection is replaced with trust and security. This allows you to move into a stage of experimentation and mutual growth. You can take the time to fine-tune your skills as a lover.

So is sex better when you're in love?

Sex can be exciting whether or not you're in love, and at any stage of a relationship. I believe sex in a loving relationship offers an opportunity to grow together and become great lovers. It may not be possible to recapture the mystery of casual sex but there's a much higher chance of all-around fulfillment.

From casual sex to long-term love

APA Reference
Staff, H. (2021, December 17). Is Sex Better When You're In Love?, HealthyPlace. Retrieved on 2023, January 31 from https://www.healthyplace.com/sex/enjoying-sex/is-sex-better-when-youre-in-love

Your Guide to Enjoying Sex Homepage 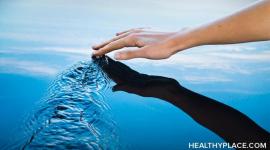 Have You Stopped Having Sex?

Does Having A Hysterectomy Really Impact Sexuality?

Living With A Low Libido Can Be Perfectly Normal

Being Smart About Condoms

The 'Big Talk' About Sex May Not Be Enough

What We Know About Sex