Why is Parnate prescribed?

Parnate is prescribed for the treatment of major depression—that is, a depressed mood that lasts for at least 2 weeks and interferes with daily functioning. Major depression is marked by at least 4 of the following 8 symptoms: changes in appetite, changes in sleep patterns, agitation or listlessness, loss of interest in usual activities or a decrease in sex drive, fatigue, feelings of guilt or worthlessness, slowed thinking or difficulty concentrating, and thoughts of suicide.

Parnate is a member of the class of drugs known as monoamine oxidase (MAO) inhibitors. It works by increasing concentrations of the brain chemicals epinephrine, norepinephrine, and serotonin.

Most important fact about Parnate

Parnate is a potent drug with the capability of producing serious side effects. It is typically prescribed only if other antidepressants fail, and then only for adults who are under close medical supervision. It is considered especially risky because it can interact with a long list of drugs and foods to produce life-threatening side effects (see "Possible food and drug interactions when taking this medication").

How should you take Parnate?

Your doctor will adjust the dosage of Parnate according to your individual needs and response. The drug usually produces improvement within 48 hours to 3 weeks after starting therapy.

What side effects may occur?

Side effects cannot be anticipated. If any develop or change in intensity, inform your doctor as soon as possible. Only your doctor can determine if it is safe for you to continue taking Parnate.

Why should Parnate not be prescribed?

Do not take Parnate if you are in danger of a stroke, if you have heart or liver disease, high blood pressure, or a history of headaches, if you have a type of tumor known as pheochromocytoma, or if you will be undergoing elective surgery requiring general anesthesia.

In clinical studies, antidepressants increased the risk of suicidal thinking and behavior in children and adolescents with depression and other psychiatric disorders. Anyone considering the use of Parnate or any other antidepressant in a child or adolescent must balance this risk with the clinical need. Parnate is not approved for use in children.

Additionally, the progression of major depression is associated with a worsening of symptoms and/or the emergence of suicidal thinking or behavior in both adults and children, whether or not they are taking antidepressants. Individuals being treated with Parnate and their caregivers should watch for any change in symptoms or any new symptoms that appear suddenly—especially agitation, anxiety, hostility, panic, restlessness, extreme hyperactivity, and suicidal thinking or behavior—and report them to the doctor immediately. Be especially observant at the beginning of treatment or whenever there is a change in dose.

The most dangerous reaction to Parnate is a surge in blood pressure, which has sometimes been fatal. For this reason, report promptly to your doctor any of the following symptoms: constriction or pain in the throat or chest, dizziness, fever, headache, irregular heartbeat, light sensitivity, nausea, neck stiffness or soreness, palpitations, pupil dilation, sweating, or vomiting.

A number of people who take Parnate experience low blood pressure, faintness, or drowsiness, so exercise great care when performing potentially hazardous tasks, such as driving a car or operating machinery.

Some people become physically dependent on Parnate and experience withdrawal symptoms when the drug is stopped, including restlessness, anxiety, depression, confusion, hallucinations, headache, weakness, and diarrhea.

If you have kidney problems, make sure the doctor is aware of this. The doctor may need to reduce your dosage of Parnate to avoid a buildup of the drug. Parnate should also be used with caution if you have an overactive thyroid gland.

MAO inhibitors can suppress heart pain that would otherwise serve as a warning sign of a heart attack. For this reason and others, it should be used with caution by older adults. Also, it should be used with caution by diabetics and people with epilepsy or other convulsive disorders because it can alter the level of drugs used to treat these conditions. Tell every doctor or dentist who you see that you are taking Parnate.

Never take Parnate with the following drugs; the combination can trigger seizures or a dangerous spike in blood pressure:

Other MAO inhibitors such as phenelzine, Antidepressant drugs classified as tricyclics (such as amitriptyline, clomipramine, and imipramine), Carbamazepine, Cyclobenzaprine

When switching from one of these drugs to Parnate, or vice versa, allow an interval of at least 1 week between medications.

Also avoid combining Parnate with any of the following:

While taking Parnate, you should also avoid foods that contain a high amount of a substance called tyramine, including:

If you are pregnant or plan to become pregnant, inform your doctor immediately. Parnate should be used during pregnancy only if its benefits outweigh potential risks.

Parnate makes its way into breast milk. If the drug is essential to your health, your doctor may advise you to stop nursing until your treatment is finished. 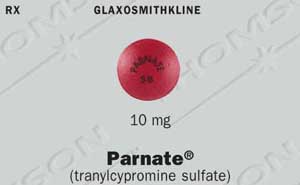 Any medication taken in excess can have serious consequences. If you suspect an overdose of Parnate, seek medical help immediately.

Mental Illness Can Mask Who We Are

What Are the Symptoms of Mental Illness?

Being Crazy vs Mental Illness