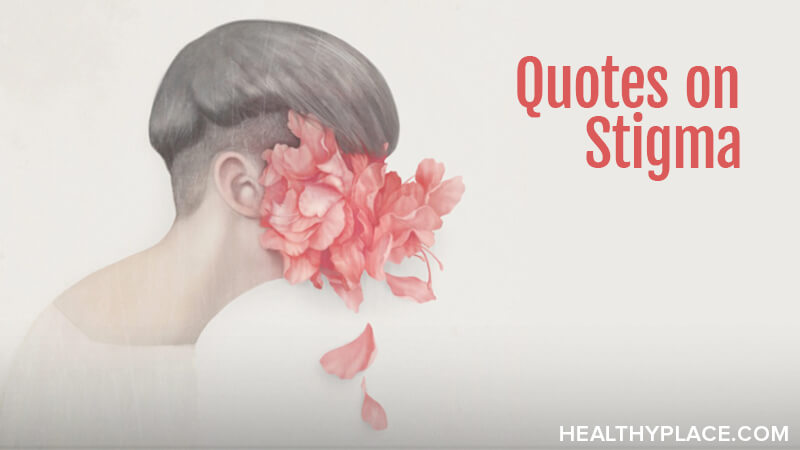 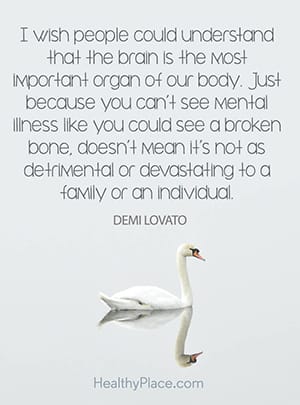 “I wish people could understand that the brain is the most important organ of our body. Just because you can't see mental illness like you could see a broken bone, doesn't mean it's not as detrimental or devastating to a family or an individual.”

What is the effect of mental health stigma on individuals and families? Read "Standing Up to Mental Health Stigma Stories" to find some answers. 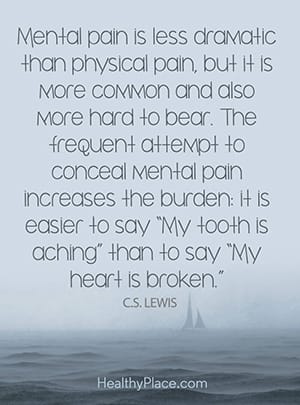 “Mental pain is less dramatic than physical pain, but it is more common and also more hard to bear. The frequent attempt to conceal mental pain increase the burden: It is easier to say 'My tooth is aching' than to say 'My heart is broken'.”

Admitting you're suffering is the first step to easing the pain of mental illness. Talk to a mental health professional to get the ball rolling. 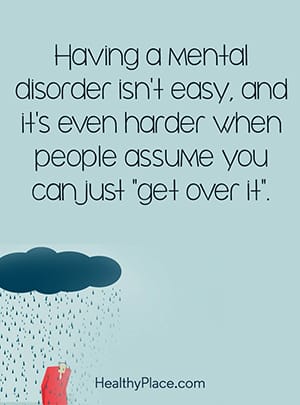 “Having a mental disorder isn't easy, and it's even harder when people assume you can just get over it.”

Do you have friends who look at you with frustration and say, "Just get over it already"? How does that make you feel? 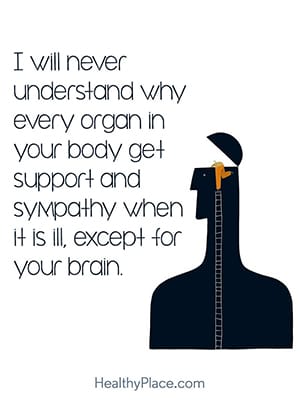 “I will never understand why every organ in your body get support and sympathy when it is ill, except for your brain.”

Did you know that mental illness can cause physical pain, too? Many people focus on the physical pain that they can understand instead of the mental pain which can't be seen and they have not felt. 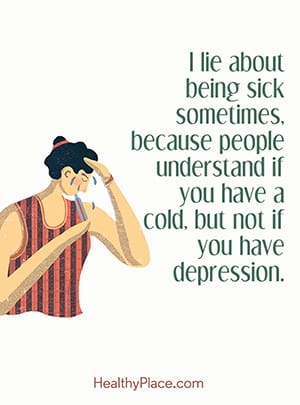 “I lie about being sick sometimes, because people understand if you have a cold, but not if you have depression."

Lying about having a mental illness sometimes feels easier than admitting to it. That's okay. Only talk about your mental illness with people you trust. 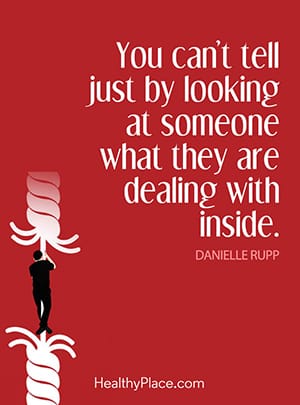 “You can’t tell just by looking at someone what they are dealing with inside.” 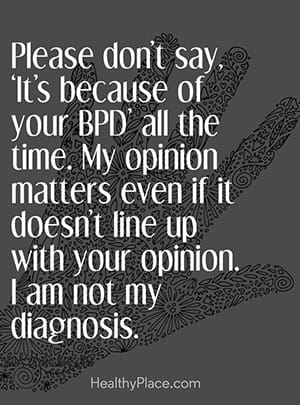 “Please don’t say, ‘It’s because of your BPD’ all the time. My opinion matters even if it doesn’t line up with your opinion. I am not my diagnosis.”

Some stigma quotes focus only on one illness, but the symptoms of many mental illnesses, including borderline personality disorder, make relationships difficult to navigate. 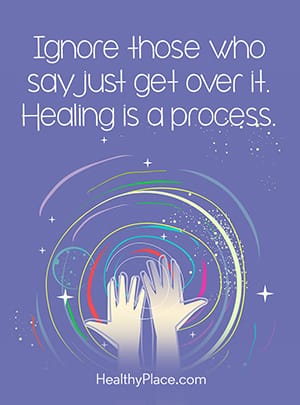 “Ignore those who say just get over it. Healing is a process.”

Healing is a process of learning to live in healthy ways that promote your wellbeing all the way around. 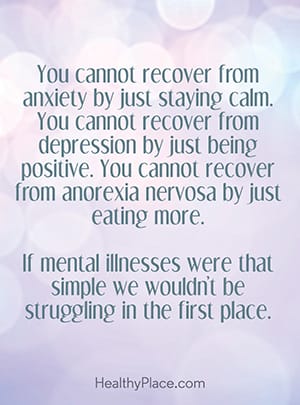 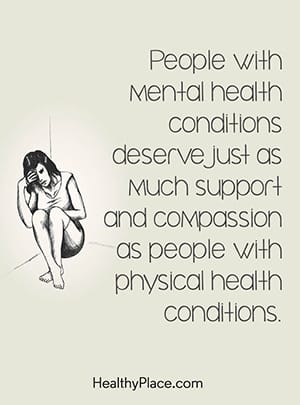 Stigma quotes might point out the obvious, albeit more obvious to some than others. 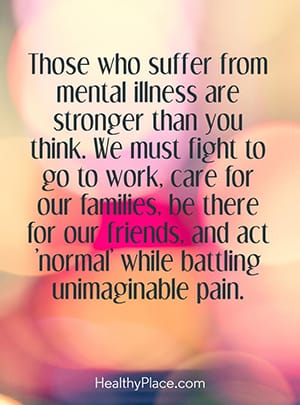 “Those who suffer from mental illness are stronger than you think. We must fight to go to work, care for our families, be there for our friends, and act ‘normal’ while battling unimaginable pain.” 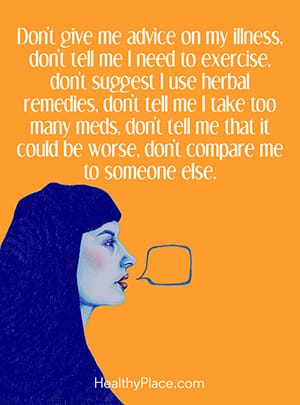 Mental illness stigma quotes like this one express the frustration of living with a mental illness around people who don't understand. 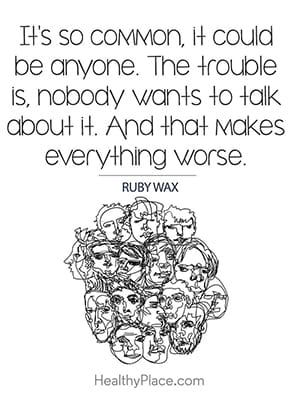 "It's so common, it could be anyone. The trouble is, nobody wants to talk about it. And that makes everything worse."

The most common mental illnesses: anxiety and depression. The others are far more common than you'd expect. 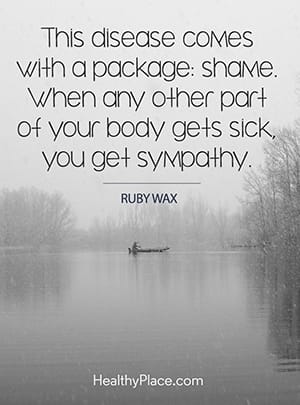 “This disease comes with a package: shame. When any other part of your body gets sick, you get sympathy.” 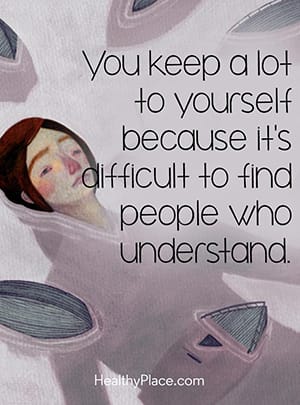 "You keep a lot to yourself because it's difficult to find people who understand." 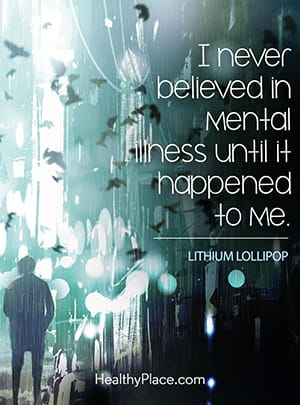 "I never believed in mental illness until it happened to me." 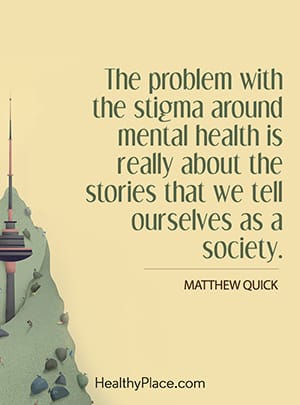 "The problem with the stigma around mental health is really about the stories that we tell ourselves as a society." 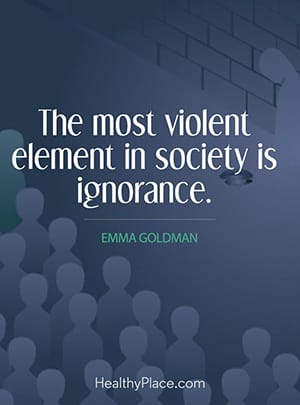 “The most violent element in society is ignorance.” 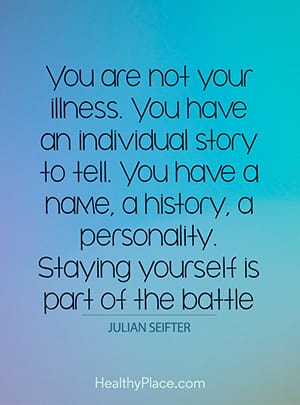 "You are not your illness. You have an individual story to tell. You have a name, a history, a personality. Staying yourself is part of the battle." 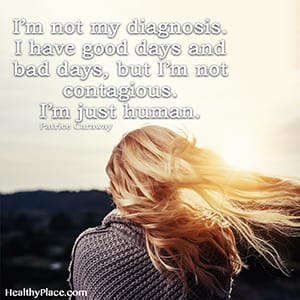 "I'm not my diagnosis. I have good days and bad days, but I'm not contagious. I'm just human."

If your diagnosis is bipolar disorder, saying "I'm bipolar" is like saying "I'm cancer." It bothers some people and doesn't bother others. You can describe your mental illness and its relation to you how you like.

The following mental illness stigma quotes delve deeper into the problem of stigma and self-stigma. After you read them, challenge yourself to speak out against stigma whenever you hear or see it.

“It is not our differences that divide us. It is our inability to recognize, accept, and celebrate those differences.”

“Please don't judge people. You don't know what it took someone to get out of bed, look and feel presentable as possible and face the day. You never truly know the daily struggles of others.”

“Never apologize to others for their misunderstanding of who you are.”

“I am still me, no matter my mental health.”

“Don’t be ashamed of your story. It will inspire others.”

“Don’t expect everyone to understand your journey, especially if they have never had to walk your path.”

“The deepest pain I ever felt was denying my own feelings to make everyone else comfortable.”

“Don’t judge my path if you haven’t walked my journey.”

“The only thing more exhausting than having a mental illness is pretending like you don’t.”

“The strongest people are not those who show strength in front of the world but those who fight and win battles that others do not know anything about.”
"Let today be the day you stop living within the confines of how others define or judge you."

"Never let the options of others become the measure of your self-worth."

"I don't let anyone's insecurities, emotions, or opinions bother me. I know that if I am happy, that's all that matters to me."

"I'm not lazy. I'm just exhausted from fighting my way through every single day."

"When someone is going through a storm, your silent presence is more powerful than a million empty words."

"A diagnosis is burden enough without being burdened by secrecy and shame."

"Just because I'm having a bad day doesn't mean I didn't take my medicine."

"Never waste your time trying to explain yourself to people who are committed to misunderstanding you."

"Your illness does not define you. Your strength and courage does."

"People with mental illness are far more likely to be victims of crimes than to commit them."

"We're not crazy or insane. We are just people living with a condition."

"If mental illness could be seen on a sufferer maybe society wouldn't say "just get over it."

"Not all wounds are so visible. Walk gently in the lives of others."

"Sometimes I don't know what is worse, living in a state of panic or living with other people's attitudes about it."

"Never underestimate the pain of a person, because, in all honesty, everyone is struggling. Just some people are better at hiding it than others."

"Masquerading as a normal person, day after day, is just exhausting."

"The two most powerful words when we're in struggle: 'me too'."

"The greatest cruelty is our casual blindness to the despair of others."

"I am the same person I was before you found out I have a mental disorder."

"I feel like I can't open up to my friends about my anxiety and depression, because they'll think I just want attention."

"I'm tired of acting as though I have something to hide."

"It's a disorder, not a decision."

"To not have your suffering recognized is an almost unbearable form of violence."

"Depression, anxiety, and panic attacks are not signs of weakness. They are signs of trying to remain strong for far too long."

"Just because you don't understand it doesn't mean it isn't so."

"1 in 4 people, like me, have a mental health problem. Many more have a problem with that."

"Labels are for jars not people."

"The bravest thing I ever did was continuing my life when I wanted to die."

"Nobody realizes that some people expend tremendous energy merely to be normal."

"Instead of judging people by their past stand by them and help repair their future."

"I had people saying 'it's all in your head'. Do you honestly think I want to feel this way?"

"No one would ever say that someone with a broken arm or a broken leg is less than a whole person, but people say that or imply that all the time about people with mental illness."

"Mental illness is nothing to be ashamed of, but stigma and bias shame us all."

"I think the stigma attached to mental illness will disappear just like it did for cancer years ago."

"I fight for my health every day in ways most people don't understand. I'm not lazy. I'm a warrior."

"Don't judge me based on your ignorance"

"I am not a victim. No matter what I have been through, I'm still here. I have a history of victory."

"It's no measure of health to be well adjusted to a profoundly sick society."

"The unhappiest people in this world, are those who care the most about what other people think."

"The mentally ill frighten and embarrass us. And so we marginalize the people who most need our acceptance. What mental health needs is more sunlight, more candor, more unashamed conversation."

"Someone has said that it requires less mental effort to condemn than to think."

"Do you know what we call opinion in the absence of evidence? We call it prejudice."

"Prejudice is a great time saver. You can form opinions without having to get the facts."

Prejudices, it is well known, are most difficult to eradicate from the heart whose soil has never been loosened or fertilized by education; they grow there, firm as weeds among stones.

"Whenever you feel like criticizing anyone...just remember that all the people in this world haven't had the advantages that you've had."

"Understanding is the first step to acceptance, and only with acceptance can there be recovery."

"Anger and intolerance are the enemies of correct understanding."

"Beginning today, treat everyone you meet as if they were going to be dead by midnight. Extend them all the care, kindness and understanding you can muster. Your life will never be the same again."

"Mental health needs a great deal of attention. It's the final taboo and it needs to be faced and dealt with."

"Judge me all you want, just keep the verdict to yourself."

"The highest form of ignorance is when you reject something you don’t know anything about."

"Prejudices are what fools use for reason." 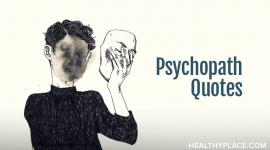 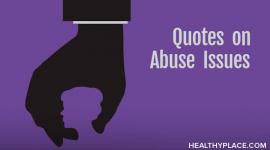 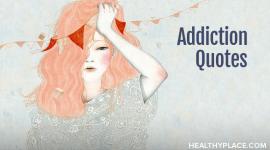 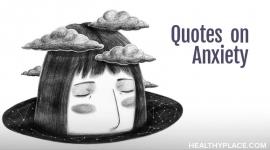