Most people are drawn physically and emotionally to people of the same sex or the opposite sex. A simple definition of bisexual is: people who experience sexual and emotional attractions and feelings for people of different genders at some point during their lives.

These people are called bisexuals, although many people prefer to call themselves:

However, bisexuality is not that simple and bisexual people are a very diverse group. (read: Top Myths About Bisexuals) Some characteristics of a bisexual person might be:

The Definition of Bisexual Can Mean Not Fitting In

A big complaint of bisexual people is that they feel that they can't fit anywhere. (read: Coming Out Bisexual)

Bisexuals then, tend to feel isolated and confused and they lack the proper support from either side. Read more about biphobia here.

APA Reference
Tracy, N. (2013, April 12). What is Bisexual? What Does It Mean To Be Bisexual?, HealthyPlace. Retrieved on 2021, April 9 from https://www.healthyplace.com/gender/bisexual/what-is-bisexual-what-does-it-mean-to-be-bisexual 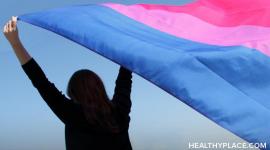 Detailed information about Self-Injury (Self-Harm, Self-Abuse, Self-Mutilation) including why people self-injure, warning signs of self-harm, treatment for self-injury and information for parents…